A version of this article originally appeared in The Dictionary of Caribbean and Afro-Latin American Biography.

was born Elaine Potter Richardson in St. John’s, Antigua, on 25 May 1949, to Annie Victoria Richardson, a domestic worker originally from Dominica, and Roderick Potter, an Antiguan chauffeur and taxi driver. Their relationship ended before Kincaid’s birth, and the child’s relationship with her father was limited to a few encounters when she and her mother sought financial support from him. The father figure in her life was David Drew, a carpenter with whom Annie Richardson began living when Kincaid was a toddler, and whom she married on 9 March 1967, almost two years after Kincaid had left Antigua.

Kincaid recalls her early childhood as a blissful, Edenic period, during which she was the sole focus of a beautiful, loving, and attentive mother, who made her exquisite clothes, taught her to read and write, regularly took her to the library, protected her from all threats, told her the stories that would later become the subject matter of her writing, and made sure that she received the best education possible for a poor and illegitimate child (at that time, illegitimate children could not attend certain schools in Antigua). However, when her mother gave birth to sons in 1958, 1960, and 1962, Kincaid’s jealousy and anger knew no bounds, as her ideal attentive mother transformed (at least from the daughter’s perspective) into a tired, bitter, and poverty-stricken stranger whose energy was dedicated to caring for her sons and ailing partner, and who even forced her daughter to withdraw from school and help out at home and, later, to work in the United States and send money to the family.

After arriving in the United States in December 1965, the 16-year-old Kincaid, working as what she has variously described in numerous interviews and writings as a servant, a domestic, or an au pair, resumed her education. She completed her secondary education at Westchester Community College, and later took classes at the New York School for Social Research and Franconia College. When she was 19 she left her live-in employment to work in New York City at a variety of jobs (e.g., secretary, receptionist, model, saleswoman, backup singer). Within a few years, some of her writings began to appear in print. Her first published article, “When I Was 17,” which was based on an interview with Gloria Steinem, appeared in Ingenue in 1973. This was followed by other articles in Ingenue, based upon interviews with other celebrities, as well as pieces in Ms. and the Village Voice. 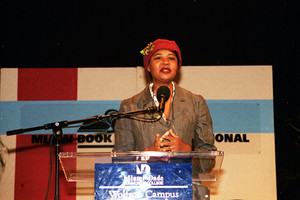 Kincaid’s first pieces for the New Yorker were published anonymously for a variety of reasons: she did not want her family in Antigua to know that she was attempting to write, she always liked taking on new personas, she wanted to be free to write brutal truths, and she hated her name. She thus decided to assume a pen name and settled on Jamaica Kincaid. On 30 September 1974 she published the first article in the New Yorker on which her new name appeared, “West Indian Weekend,” an account of a West Indian Day parade in Brooklyn. The first story she wrote, simply titled “Girl,” was published in the New Yorker in June 1978, and it became the first story in her first book, At the Bottom of the River (1983). It remains her most anthologized piece of fiction.

Kincaid’s introduction to the New Yorker led not only to publication, but also to marriage. In 1979 she married Allen Shawn, a talented musician and the son of her beloved New Yorker editor, William Shawn—whom Kincaid called, “the perfect reader,” and for whom she wrote (My Brother, pp. 196–198). Kincaid and Allen Shawn, who divorced in 2002, have two children, Annie, born in 1985, and Harold, born in 1988.

Kincaid’s marriage was followed by a series of highly acclaimed books, all of which are, to varying degrees, autobiographical. Indeed, Kincaid has often declared that everything she writes is autobiographical: “even the punctuation” (“In the Main Ring,” 2008). In a variety of interviews and readings, she has insisted that she has only written about her family, and that everything she has written is about her mother and herself. Most of her works either envision a blissful, paradisiacal world where the Kincaid-like character dwells in perfect harmony with her mother or someone who dearly loves her, bemoans the loss of that world, or damns the villains who disrupted that world. The role of the mother and the autobiographical nature of her writing have become the key elements in critiques of Kincaid’s work, with Jana Evans Braziel (2009) observing that Kincaid’s entanglement of myth and history results in her writing “alterbiography,” texts not so much about one individual as about the issue of identity in the diaspora (pp. 6–8). Throughout her works, her protagonists wrestle with issues of history, slavery, colonialism, language, naming, racism, and death. They also reveal certain emotional traits of the author’s that have caused extensive commentary, including hatred, anger, bitterness, and sadness, all of which Kincaid often proudly embraces and defends—though she occasionally attacks critics who comment on those traits.

Kincaid’s autobiographical writings lend themselves to varied classifications. Her first collection of previously published short stories was At the Bottom of the River (1983), a lyrical, surreal, complex, and often obscure work. This was followed by a contrastingly simple, though no less, lyrical collection of previously published short stories, Annie John (1985), which is often characterized as a bildungsroman. In 1986 there appeared a limited edition of the little-known and rarely referenced Annie, Gwen, Lily, Pam and Tulip, illustrated by Eric Fischl (a trade edition was published in 1989). As notable as a museum piece as it is as a work of fiction, the work is set in a precolonial world, presents “a perfect place” facing destruction, and includes stories originally written as a section of At the Bottom of the River.

Kincaid’s novella Lucy (1990) is such an autobiographical account of her early years in the United States that it might well be characterized as a memoir with all the names changed. Kincaid uses a different mode in A Small Place (1988), a harsh political essay-critique of Antigua, which has often been facetiously described as an anti-travel narrative. The year 1996 witnessed the appearance of the novel oddly titled The Autobiography of My Mother. Though this fascinating novel is set in Kincaid’s mother’s home nation of Dominica, the purported mother of the title bears as much resemblance to Kincaid as she does to her mother, reinforcing the protagonist Xuela’s insistence at the end of the novel that this account of her life was just as much an account of the life of her mother and of her aborted children.

My Brother (1997) purports to be an account of Kincaid’s youngest brother’s death from AIDS, but the focus is more on Kincaid’s response, and on her issues with her mother—until the end, where the focus is more on the death of her editor and mentor, William Shawn. While My Garden (Book) (1999) treats her efforts to establish a Garden of Eden at her Vermont home, there are frequent flashbacks to her issues with her mother, who inspired her love of gardening. Mr. Potter (2002) is a fictionalized biography about the father who deserted her, but, as always, Kincaid and her mother are dominant. Among Flowers: A Walk in the Himalaya (2005), a travel narrative focusing on her search for flowers in the Himalaya, continues to reflect the author’s obsession with her mother. The 2013 novel See Now Then, which for the first time fictionalizes details from her marriage, focuses upon Mr. and Mrs. Sweet and their children, Persephone and Heracles, characters bearing an uncanny similarity to Kincaid’s American family, but with the villain who destroys the protagonist’s Eden being the husband, rather than the mother. Clearly, though, the suffering Mrs. Sweet is that same suffering daughter who has wrestled with her mother throughout the Jamaica Kincaid canon.

From the beginning to the end of the Kincaid canon, one might argue that she is presenting the same story over and over, whether her purported focus is herself, her mother, her father, her brother, her uncle, her aunt, her husband, her nation, or the Americas generally. They all become one and the same, as the author captivates the reader with powerful stories characterized by her unique lyricism, her deceptively simply imagery, and the mesmerizing effect of her endless repetitions. Over and over we hear some of the same events from the lives of the author and her mother in their real or fictional guises—their great love for each other; their endless conflicts; the bastard child with a line drawn through him/her (where the father’s name should appear on the birth certificate); the mother’s teaching her daughter to read; the mother’s sending her to school when she was 3½; the mother’s burning of her daughter’s cherished books (motivating Kincaid to dedicate her life to rewriting them); the mother who is an expert swimmer, swimming with her daughter on her back (Kincaid, who was always fearful of the water, has said this is her most treasured memory of her mother); the mother and daughter unpacking a trunk holding family memorabilia (Kincaid has declared that her writing style, which she describes as an unpacking and repacking, developed from this ritual); the “washing” (and thus destruction) of pictures by the delirious daughter; the planting, uprooting, and transport of plants and trees; the daughter’s concern about her physical appearance (height, features, color, hair); the mother as a young girl struggling to carry a basket of produce on her head, weighed down by a concealed snake; the daughter who stops speaking to her mother or eating her food; the search for Obeah cures; the struggles of mother and daughter with the colonial school system, especially the daughter’s being forced to copy Books One and Two of Paradise Lost; the deaths of family, neighbors, and friends, especially the deaths of young males whose bodies have wasted away; the daughter’s efforts to protect herself from death and to outlive her enemies; the daughter’s desperate efforts not to become her mother (especially not to her own beloved children); the journey from home of the rebellious daughter.

Kincaid, who became an American citizen in 1993, held a joint appointment as a visiting lecturer of African and African American studies at Harvard University from 1991 to 2009, when she took a position as the Josephine Olp Weeks Chair and professor of literature at Claremont McKenna College in Claremont, California.

Kincaid’s numerous awards include a Morton Darwen Zabel Award for Fiction (1985), a Guggenheim Fellowship (1989), an Anisfield-Wolf Book Award (1997), and the Prix Femina Ėtranger award (2000); she was a finalist for the PEN/Faulkner Award (1997), and she was inducted into the American Academy of Arts and Sciences in 2009. She has received honorary degrees from Williams College (1991), Long Island University (1991), Amherst College (1995), Bard College (1997), Middlebury College (1998), Wesleyan University (2008), Tufts University (2011), and Grinnell College (2012). As one of the most highly acclaimed Caribbean writers of the late twentieth and early twenty-first centuries, Jamaica Kincaid is the subject of scores of books and hundreds of journal articles and interviews.