The event commonly referred to as the Watts Riot began on 11 August 1965 in the Watts neighborhood of Los Angeles, California, as a routine traffic stop that catapulted out of control. California Highway Patrolman Lee W. Minikus, a white officer, initially stopped Marquette Frye, the driver, and his brother, both African American young males, for erratic driving and then made the determination to arrest Frye for drunken driving. People from the neighborhood began to gather, and Minikus called for backup officers. Frye did not submit to arrest, and the officers used their batons and physical force to subdue him. Thereafter an altercation broke out between Frye's mother, who lived nearby, and his brother, and they also were arrested. Various accounts of police brutality fueled by recent incidents of police misconduct quickly spread throughout the crowd. Individuals in the crowd began to respond to the tactics being used by the officers by hurling verbal insults and throwing bricks and bottles. The violence escalated into looting, burning buildings, and physical assault, among other acts. Physical encounters between the members of the community and the police increased. Over a six-day period, reportedly thirty-four people, twenty-five of them black, were killed; eleven hundred were injured; approximately four thousand people were arrested; more than six hundred buildings were damaged or destroyed; and an estimated $40 million in property damage occurred. More than thirteen thousand national guardsmen, nine hundred police officers including the state highway patrol, and seven hundred sheriff's deputies joined forces to take control of the Watts neighborhood.

“Riot” is the term most commonly used to refer to these events, although others argue that the events should be viewed as social protest, revolt, or rebellion. In distinction to the random violence associated with rioting, the violence in Watts was targeted: certain businesses were subjected to arson while others—particularly those owned by African Americans—were spared generally. Moreover, this conflagration erupted in the midst of a national debate concerning voting rights for African Americans; in the wake of violence against passive civil rights demonstrators; and in the context of concern about the escalation of the war in Vietnam and the disproportionate mortality rates among African American soldiers there. In this light, the events of August 1965 can be seen in some ways as a revolt against deeply encrusted forms of bias. 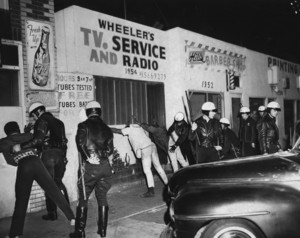 President Lyndon B. Johnson asked the former CIA director John McCone to head a special committee to investigate the Watts Riot. The resulting report, published in December 1965 and titled Violence in the City—An End or a Beginning? and commonly known as the McCone Report, revealed that underlying factors of inner-city life for African Americans such as poverty, inequality, and racial discrimination—resulting in high unemployment, inadequate education and medical care, police brutality, poor housing, and other disparities—contributed to the response of people that day. The passing in California of Proposition 14, a 1964 referendum vote that counteracted fair-housing legislation (designed to curb racial discrimination) passed in the previous year, had further alienated African Americans. The McCone Report stated that corrective actions needed to take place to address the conditions that led to the reaction of the African American community.

The effects of the events of August 1965 were not only immediate but also far-reaching. The popular two-term Democratic governor Pat Brown was blamed for the riots and failed to win reelection in 1966: Running on a conservative platform that promised to prevent the occurrence of violence similar to the Watts Riot, Ronald W. Reagan was elected governor in California in 1966 and built a record there that led to his becoming president of the United States in 1980. On the other end of the political continuum, Tom Bradley, an African American who formerly served as a police officer and by 1965 served on the Los Angeles City Council, also became prominent in the aftermath of this civil unrest. In 1973, Bradley ran for mayor of what was then the nation's third-largest city, and prevailed—the first black to do so in that city.

The conflict between the Los Angeles police and the Watts community intensified as a result of the tumultuous developments of August 1965. The Black Panther Party, an organization of mostly African American men, was formed in no small part to provide protection from the type of police brutality that was seen in Watts. The Black Panthers expanded beyond California throughout the United States and even internationally, but the group's growth was thwarted and eventually broken by harassment, infiltration, and efforts to foment dissension within the group by the FBI's COINTELPRO (Counter Intelligence Program). Fortieth-year commemoration discussions of the Watts Riot suggested that appropriate corrective actions were not taken to address the conditions that led to the events on 11 August 1965. The Watts community and surrounding area continued to be plagued by conditions of racial discrimination and economic exploitation.