A term that entered common parlance in the 1960s, “soul food” refers to food primarily from the U.S. South that has long been associated with African Americans. The “soul” in the term “soul food” conveys ideas of spirituality and earthiness embedded in African American culinary expression. This cuisine came into existence and evolved as enslaved Africans grafted Amerindian and European foods and cookery onto primarily West African culinary practices. Soul food is closely tied to black family and social life because of the central position that black women occupy in transferring knowledge of an African American food culture across generations.

From the 1750s well into the twentieth century, soul food gained national recognition as African American women and men dominated the nation's kitchens, preparing, cooking, and serving food in private homes, restaurants, military mess halls, railroad dining cars, and other venues. Some regard soul food as unhealthy or as a shameful holdover from slavery, but for many African Americans soul food symbolizes their history of overcoming adversity, maintaining strong family and community ties, and expressing ethnic pride.

Western and west-central African cooking techniques, culinary practices, foods, and social values, tempered by complex cultural transferences crisscrossing the Atlantic, provided the basis for the cuisine shaped in the crucible of slavery in the Americas. Cooking methods included boiling, deep frying, steaming, roasting in or toasting beside an open fire, and baking in ashes; culinary practices included the use of okra, nuts, and seeds as thickeners, hot spicy sauces, leafy greens, fritters, smoked ingredients, and composed rice dishes. Okra, black-eyed peas, rice, watermelon, and millet, among other crops brought to the Americas by European slave traders and enslaved Africans, entered the American diet.

Meanwhile, foods native to the Americas, principally corn (maize), peanuts, tomatoes, and chili peppers, crossed the Atlantic and became part of the African diet. Enslaved Africans then brought new uses for these New World foods back to the Americas. They also used foods new to them in America that appeared similar to foods they had known in Africa: for example, the American sweet potato was substituted for the African yam. Through their foodways, enslaved Africans and African Americans expressed traditional social values shared by many African nationalities, enabling an initially polyglot, multiethnic slave population to forge an African American culture.

Slaves created a cuisine that varied by season, location, type and availability of foodstuffs, and the conditions of their slavery. Slaves’ daily diet ranged from one based predominantly on vegetables to one based on cornmeal, salt pork, and molasses. By the antebellum era African Americans had earned a reputation as good cooks, able to make do with what little was available and able to invent new dishes from foodstuffs that slaveholders considered undesirable. Those having the greatest access to a variety of ingredients and who had experience with non-African cooking techniques were often women who labored in slaveholders’ homes.

Two major regional variations of soul food came from the Gullah, who maintained many of their African foodways in coastal South Carolina, where they relied upon rice and seafood, and from black people in New Orleans, Louisiana, and its environs, who, influenced by Caribbean culture, developed spicy Creole foods. Regardless of location, slaves pioneered dishes that became mainstays of soul food: for example, peanut soups and gumbos, collard greens with cornbread, Hoppin’ John (rice and black-eyed peas), and sweet potato pie.

Soul food would simply have been labeled southern food had African Americans not been the principal cooks in the South and long associated with certain foodstuffs and cooking techniques. African Americans living under slavery prepared, cooked, and served foods not only for themselves but also for middle- and upper-class white families. Many black slaves and poor white southerners subsisted on a daily diet of mainly the three Ms: cornmeal, meat in the form of salt pork, and molasses. African Americans generally spiced their foods and used African methods, including slow cooking in iron pots over an open-hearth fire.

Soul food gained greater importance in the lives of white southerners during the period of economic depression that began after the Civil War and lasted more than half a century. Wealthy white southerners relied upon former slaves and their descendants to teach them how to make do with and create new dishes from limited supplies of foods. Poor white southerners and most blacks continued to subsist on the three Ms and other foods that came to be labeled as southern or soul food.

Over the century following the abolition of slavery in 1865, black southern women and men brought their cooking with them as they migrated to the North and West and to cities within the South. They cooked in private homes, restaurants, and railroad dining cars and established barbecue, catering, and street-vending businesses. As consumers, black working people established a massive presence in large cities like Chicago and New York that changed food retailing patterns in segregated, all-black districts, where black and white grocers tailored marketing strategies to appeal to black southerners. African Americans wrote cookbooks that popularized soul food; for instance, Abby Fisher, a former slave from Alabama, wrote What Mrs. Fisher Knows about Old Southern Cooking (1881). A few white cookbook authors brought soul food to the attention of a broader audience of white Americans. Minnie C. Fox, in The Blue Grass Cookbook (1904), acknowledged the debt that America owed to black cooks and chefs.

During these same one hundred years, during which racism and segregation intensified, the people who cooked soul food and the food itself became targets of often contradictory racist and ideological assaults and ridicule. For example, advertisements featured mammies and wide-smiling chefs on Aunt Jemima pancake mixes and syrups, Uncle Ben's rice, and Cream of Wheat boxes, caricaturing black women and men to stress the social inferiority of African Americans while praising them as the nation's principal chefs and cooks.

White opinion-makers and authorities, especially in the 1910s and 1920s, connected black food preparers and servers to unsanitary conditions in neighborhoods where many black urbanites resided. And white southerners, including those who migrated north and west, distanced themselves from the African American features of southern culture, including its foodways. Soul food also had its African American detractors. Some in the black middle class thought that soul food represented an expression of southern black people as ignorant, backward bumpkins who ought to jettison their rural ways so that all African Americans could achieve respectability in the eyes of white Americans.

In the period between 1930 and 1975 some African Americans—notably Elijah Muhammad (né Elijah Poole), leader of the all-black religious organization the Nation of Islam—condemned soul food. Soul food relied heavily on pork, a food considered unclean by the Nation of Islam; in addition, many decried soul food as a reminder of the cultural genocide perpetrated under slavery. The comedian Dick Gregory, in Dick Gregory's Natural Diet for Folk Who Eat (1973), argued that the soul food trend popularized in the 1960s was unhealthy, citing the use of nonorganically cultivated foods.

But many African Americans defended soul food as an identifier of black culture as they mobilized to restore, protect, and expand their political and civil rights. In the early 1960s African American social and political activists invented or popularized the term “soul food” not only to distinguish it from southern food, but also to stake a black ethnic claim on the cuisine. They offered and contested definitions of what constituted soul, seeing the food—along with other things soul, like soul music—as a symbol of black urban culture, self-awareness, and ethnic pride. Some African Americans said that soul food was the food that black Americans had always eaten. Others defined soul food by its ingredients, the equipment and methods used in its preparation, or the length of cooking time. 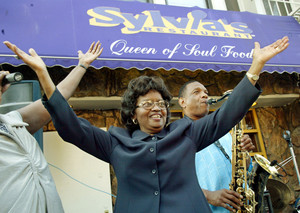 The black woman in particular, according to some, imparts soul to the food as she prepares dishes as an expression of her love for family, community, and culture. Beyond the contested definitions, soul food takes on greater symbolism when served on holidays like Juneteenth, usually 19 June, commemorating the day in 1865 when enslaved Africans were said to have heard the news of the abolition of slavery in the United States; Kwanzaa, a week of celebrating traditional African and African American cultural values relating to the harvest and community; and New Year's Day, with its traditional dishes like black-eyed peas and collard greens that are thought to bring good luck. Numerous voices ensure that the definition of soul food, though usually referring to the same African American cuisine, will vary.

The African American claim in the 1960s that soul food was one of the chief cultural expressions of black people resonated again in the 1990s when a nostalgic Black Power revival emerged. Soul food in the context of this revival was used to reinforce such themes as the need to build and maintain strong black families, black economic institutions, and pride in things African American. The movie Soul Food (1997) depicted cooking as a vehicle for black family unity and as a reminder of how the food sustained African Americans through slavery. An increasing number of African American–owned businesses arose as a response to popular demands for soul food, including a chain of drive-through chitterling (pronounced “chitlin”) eateries in Atlanta and a product line of soul food seasonings called Uncle Wyley's Authentic Soul Food. Vegetarian soul food cafés, an offshoot of soul cuisine nouvelle, appeared in New York City, Washington, D.C., and other locales. Soul food entered the twenty-first century as an expression of African American ethnic pride and heritage and as a prominent component of a genuinely American cuisine.