Although not the strongest or deadliest storm to have struck the United States, Hurricane Katrina was the most destructive and costly, damaging coastal communities in Louisiana, Mississippi, and Alabama and devastating more than 90,000 square miles (235,000 square kilometers) of land. Its import, however, is best measured by its contribution to the public discourse on the endemic racial and income disparities found in the early twenty-first century in New Orleans, one of the most famous cities in the United States.

The hurricane began as a tropical depression in the southeastern Bahamas on 23 August 2005, grew in strength to become Tropical Storm Katrina while traveling northwest and west thorough the Bahamas on 24 August, and on 25 August gained strength a few hours before making landfall in southern Florida as a Category One hurricane. On 26 August the storm continued on its westward path, gaining strength while crossing the Gulf of Mexico. At 6:10 a.m. on 29 August, Hurricane Katrina made landfall in southeastern Louisiana as a Category Three hurricane, 400 miles (640 kilometers) wide with a 30-mile (48-kilometer) eye and winds of 100 to 140 miles per hour (160 to 225 kilometers per hour). Though there had been warnings about the weaknesses of the levee system surrounding New Orleans, very few measures had been undertaken to protect those living within the areas most likely to flood. The eventual breaching of the levees in New Orleans caused severe flooding. By 30 August, four-fifths of the city was flooded and an estimated fifty thousand to one hundred thousand people were stranded on rooftops and in the city's Louisiana Superdome and Ernest N. Morial Convention Center.

By late 2006 the insurance industry had estimated that insured losses had reached approximately $60 billion, with approximately $135 billion in damage to the entire Gulf Coast. The city of New Orleans sustained the worst damage. In addition to vast economic and environmental damage, the hurricane was responsible for 1,464 deaths in Louisiana and more than 1,700 deaths in all the affected areas, as well as innumerable associated health problems. 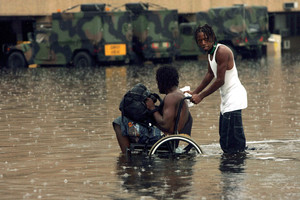 The hurricane's effect on New Orleans has come to symbolize the deep racial and class divide in the United States. New Orleans has long been a major tourist destination, visited by millions each year. But much of the workforce that supported its tourist facade lived in neighborhoods not typically visited by tourists and made up of a largely African American and intensely poor “underclass.” New Orleans has historically been one of the most racially segregated and impoverished cities in the United States. Before the hurricane, African Americans constituted 67.3 percent of the population as compared to 32.3 percent in the rest of Louisiana and 12.3 percent in the rest of the country. Whites constituted 28.1 percent in New Orleans and 62.6 percent in Louisiana; Asians constituted 2.3 percent and 1.2 percent, respectively; and Hispanics 3.1 percent and 2.4 percent. Fully 27.9 percent of New Orleans residents were poor. The Ninth Ward, the area that sustained the most damage, is a neighborhood of concentrated poverty the likes of which is relatively rare in the United States.

The racial dimensions of the hurricane can be examined through two theories of racial inequality: discriminatory/disparate treatment and discriminatory/disparate impact. The first, disparate treatment, refers to racial inequality that is the result of the intentional conduct of actors motivated by racial animus. This method of discrimination is often referred to as intentional discrimination and posits that various governmental actors, from members of the local police force to the president of the United States, responded to the disaster in a discriminatory way—that their treatment of those affected by the hurricane was motivated by racial animus.

For example, criticism was leveled against President George W. Bush by the African American singer-songwriter Kanye West, who stated during an unscripted monologue on an NBC-sponsored telethon for victims of the hurricane that “George Bush doesn't care about black people.” That sentiment was echoed by politicians, news reporters, and social commentators. Examples of purposeful discrimination include police blocking off a bridge, the Crescent City Connection, leading from New Orleans to the neighboring community of Gretna, fearing that an influx of African Americans would bring crime to the area; New Orleans police shooting into a crowd of “looters” on the Danziger Bridge, killing four African Americans; and the predominantly white Saint Bernard Parish passing an ordinance, widely criticized as purposively discriminating against African Americans, that restricted occupancy of property to family members of those who were resident prior to the hurricane.

The media, too, was accused of racial bias. Perhaps the best example is the controversy that arose when Yahoo! News published two photographs of people searching for food in the floodwaters. In one photograph the people are white, and the caption accompanying the photograph states, “Two residents wade through chest-deep water after finding bread and soda from a local grocery store.” The other photograph shows an African American survivor, and the accompanying caption reads, “A young man walks through chest deep flood water after looting a grocery store in New Orleans.” The photographs were very similar—the only real difference was the apparent race of the subjects—yet the white couple were “finding” food and the African American man was “looting.”

The second theory used to explain the racial dimension of the hurricane is that of disparate impact, which refers to the inequality between the races not through the intentional behavior of individuals but as a consequence of assumptions and practices, race neutral in purpose, embedded in the ordinary system of governance that may benefit or privilege members of one group at the expense of the interests of another. This second category is sometimes referred to as systemic or unintentional discrimination.

This theory suggests that race played a role in determining who would experience the greatest impact of the hurricane. The hurricane, an archetypal natural disaster and thus a race-neutral event, would have a disproportionate impact on African Americans and other minority groups more likely to be among the poor. Regardless of the manner in which the impact of the hurricane is measured, whether by economic, political, environmental, or social indexes, the path of the hurricane's destruction coincided with and highlighted a preexisting structure of endemic poverty and racial inequality. The damage caused by the hurricane was superimposed on a system already marked by an inequitable distribution of both private and public resources reflected in patterns of racial and economic segregation and discrimination. The areas most heavily damaged by the storm had a majority of African Americans and were poor, and the areas least damaged by the storm were wealthier and had a majority of white residents.

Of the 354,000 residents living in areas where damage was moderate to severe, 75 percent were African American and 29 percent lived below the poverty line. White households were twice as likely to have access to cars as African American households were, facilitating evacuation. After being devastated by the hurricane, the city of New Orleans suffered an estimated 64 percent reduction in its total population. Many poor African American residents were transported to surrounding areas, with Houston, Texas, receiving the largest influx of evacuees, estimated at 240,000 immediately after the storm, with some 150,000 remaining at least seven months after the storm. By January 2006 the numbers of residents in areas that were not flooded during the hurricane was roughly the same as before the storm. But in the predominantly African American neighborhood of the Lower Ninth Ward, only one thousand of the twenty thousand people who lived there before Katrina had returned. The U.S. Census Bureau reported that New Orleans changed from being a majority–African American city to being a majority-white city, perhaps having a dramatic effect on the voting population.

Though it has been said that a hurricane is inherently race neutral (indeed, President Bush said that “the hurricane didn't discriminate”), the theory underlying this—that only purposeful racial discrimination counts in some way—fails to explain why a large population of largely poor blacks were concentrated by “market forces” in areas of New Orleans situated next to dangerous levees. Whether or not one classifies the racial dimension of Hurricane Katrina as best explained by the theory of purposeful discrimination, the impact was nonetheless disproportionately felt by African Americans, making Hurricane Katrina an especially powerful lens through which to examine racial disparities in the United States in the early twenty-first century.

After widespread criticism of his administration's failure to provide adequate recovery assistance to the victims of the hurricane, President Bush admitted in a speech given on 15 September in New Orleans's French Quarter that the hurricane had struck an area divided by race and class, stating, “there's also some deep, persistent poverty in the region. … That poverty has roots in a history of racial discrimination which cut off generations from the opportunity of America. … Let us rise above this legacy of inequality.”