Mythologized and romanticized, the Underground Railroad remains one of the most fascinating and misunderstood phenomena of nineteenth-century America. Even the origin of the name “Underground Railroad” is unclear. The most famous antebellum novel, Uncle Tom's Cabin, did much to solidify the legendary status of the Underground Railroad. The harrowing story of Eliza's escape over the ice-choked Ohio River and the tale of how sympathetic whites helped her to get to Canada filled American imaginations with visions of a well-organized secret society that aided fugitive slaves on their journey to freedom. Couple this with the post–Civil War reminiscences of former abolitionists and others who often embellished their roles in the Underground Railroad, and it becomes clear why historians and the general public alike have difficulty separating fact from fiction. Many Americans still cherish the notion of a mysterious Underground Railroad with tunnels and secret hidey-holes.

What is known about the Underground Railroad is that it was not nearly as well organized as it is portrayed in popular culture. In some areas, particularly Quaker communities, assistance to fugitives would be forthcoming, but the truth is that much of the help was haphazard and spontaneous. Such aid came in a variety of forms, including food, clothing, shelter, money, and direction in reaching the next “station.” African American communities were invaluable in assisting runaway slaves. Black vigilance committees not only provided a safe haven but also assisted escapees in finding places to live, jobs, and protection from slave catchers. Indeed, for many years, historians downplayed the agency of the slaves themselves as well as the key role of free African Americans in the Underground Railroad. The historian Benjamin Quarles was one of the first to examine the role of blacks in the abolitionist movement and the Underground Railroad. He gives numerous examples of African Americans who worked tirelessly to aid their brothers and sisters still in chains. For example, the vigilance committee of Cleveland, Ohio, was almost entirely African American and was devoted to aiding fugitives. In one six-month period in 1854–1855 the organization assisted more than 275 runaways who fled to Canada. 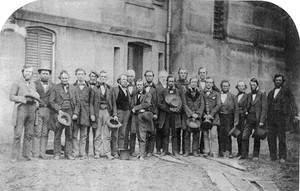 While many who participated in the Underground Railroad remain anonymous, some gained fame for their work in assisting slaves to freedom. Harriet Tubman is the most renowned. A runaway slave herself, Tubman put her own life on the line to venture back into slave territory to bring countless others north. Another example is John P. Parker of Ripley, Ohio, who was born into slavery, purchased his freedom in 1846, and became an important conductor on the Underground Railroad. Like Tubman, Parker went back to the South time and time again over a fifteen-year period to help others to freedom.

The Fugitive Slave Law of 1850 greatly increased strictures on runaway slaves, including denying them trial by jury and the right to testify on their own behalf. It also turned law enforcement officials at all levels throughout the nation into slave catchers. Moreover, it forced ordinary citizens to capture alleged fugitives, which angered many northerners. The law inadvertently spawned a number of dramatic fugitive slave rescues. One of the most significant was the Oberlin-Wellington Rescue in Ohio. John Price, an escaped slave, lived in Oberlin. A slave catcher named Anderson Jennings from Maysville, Kentucky, recognized Price and plotted his return to his former master, John Bacon.

In early September 1858 Price's kidnappers took him to a hotel in the town of Wellington, south of Oberlin, to await the next train south. When word of Price's capture spread to Oberlin, many people—both black and white—sped to Wellington to rescue him. When the crowd discovered that Price was hidden in a hotel, they were able to pull off the rescue and return him to Oberlin. Professor James Fairchild of Oberlin College agreed to hide Price in his attic until the former slave was able to flee safely to Canada. The actions of the “Rescuers,” as Price's liberators referred to themselves, led to an intense, long-drawn-out trial in federal court for several of the participants. The rest awaited trial in prison in Cleveland; they were eventually freed in July 1859.

Although Douglass himself had escaped slavery, he would not reveal until after he had legally gained his freedom exactly what method he had used to free himself. He believed that the retelling of stories about the Underground Railroad only made it more difficult for those still in bondage, stating that he “never approved of the very public manner in which some of our western friends have conducted what they call the ‘Under-ground Railroad,’ but which, I think, by their open declarations, has been made … the ‘Upper-ground Railroad.’ Its stations are … better known to the slave-holders than to the slaves.” Douglass admired the people who tried to help runaways but also believed that publicizing such actions only put slave owners even more on their guard. At the same time, however, Douglass actively assisted fugitive slaves in their flight to freedom. While he was in Rochester, he was a leader in the community's vigilance committee, and his home was known as a station on the Underground Railroad, housing runaways on their way to safety in nearby Canada. Not only did Douglass house fleeing men, women, and children, he also supervised the activities of other Underground Railroad agents in the Rochester area.

While the tunnels, secret passages, hidden rooms, and other such romantic visions of the Underground Railroad persist in the American imagination, the true story of the Underground Railroad is coming to light. Men and women, black and white, slave and free all sacrificed much to gain freedom for those in chains. Frederick Douglass, who began life as a slave, was one of the relatively few with the courage to leave everything he knew for a chance to live as a free person. Although the exact number of slaves who successfully escaped bondage will never be known, it is certain that the Underground Railroad did exist, though not quite in the organized or conspiratorial form of myth and legend.