The Dred Scott case, referred to in case law as Dred Scott v. Sandford, 19 Howard (60 U.S.) 393 (1857), was the most important slavery-related decision in U.S. Supreme Court history. Speaking for a 7–2 majority, Chief Justice Roger B. Taney reached three major conclusions that fundamentally shook national politics and deeply affected the rights of free blacks, especially in the North. Taney held that 1) blacks, even free blacks in the North, could never be considered citizens of the United States and could not sue in federal court as citizens of the states in which they lived; 2) the ban on slavery in the western territories that was part of the Missouri Compromise was unconstitutional because Congress had no power to regulate the territories beyond the most minimal organization of a territorial government; and 3) neither Congress nor the territorial governments could ever prohibit slaveholding in the western territories, and thus neither a congressional ban on slavery in the territories nor a ban on slavery through popular sovereignty would be constitutional. 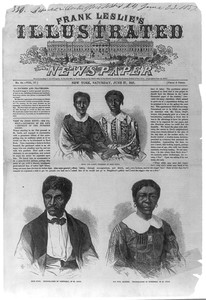 his wife, Harriet Scott; and his children Eliza and Lizze, in wood engravings published by Frank Leslie, 1857. The images accompanied an article under the headline “Visit to Dred Scott—His Family—Incidents of His Life—Decision of the Supreme Court.”

The case led to a hardening of views on race and politics in both the North and the South. The northern reaction helped the Republican Party. Abraham Lincoln's articulate critique of the case during his debates with Senator Stephen A. Douglas of Illinois thrust him into the national limelight and ultimately led to his nomination and election to the presidency in 1860. For African Americans the case was a disaster; the abolitionist orator—and escaped slave—Frederick Douglass called it “cold-blooded” and “devilish.”

The case itself involved a slave named Dred Scott, whose late master was Captain John Emerson, an army surgeon. Emerson had taken Scott to a military post in Illinois, where slavery was illegal under state law, and to Fort Snelling in what would later become Minnesota, territory in which slavery had been prohibited by the Missouri Compromise. After Emerson's death, Scott asked Emerson's widow, Irene Sanford Emerson, to free him or to allow him to buy his freedom. She refused. Scott then sued. In 1850 a trial court in Saint Louis freed Scott on the basis of his residence—with his master's permission—in Illinois and in a territory made free by the Missouri Compromise. This decision followed Missouri precedents dating from 1824, which held that residence in a free jurisdiction led to the emancipation of a slave.

The Missouri Supreme Court reversed this result in Scott v. Emerson (1852), rejecting its precedents because of the “dark and fell spirit” of abolitionism, which the court claimed had taken over the North. In 1854 Scott began a new suit, in federal court, against his new owner, Irene Emerson's brother, John F. A. Sanford. (His name is misspelled as Sandford in the official report of the case.) Scott sued “in diversity,” claiming that he was a “citizen of Missouri” while Sanford was a citizen of New York, and thus Scott asserted the right to sue Sanford in a federal court. Sanford denied that Scott could sue him, arguing that “Dred Scott is not a citizen of the State of Missouri, as alleged in his declaration, because he is a negro of African descent; his ancestors were of pure African blood, and were brought into this country and sold as negro slaves.”

U.S. District Judge Robert W. Wells rejected Sanford's theory, concluding that if Dred Scott was free, then he could sue in federal court as a citizen of Missouri. However, after hearing all the evidence, Wells charged the jury to uphold Scott's slave status, based on the earlier Missouri decision that Scott was still a slave. Scott appealed to the U.S. Supreme Court, where he lost in a 7–2 decision. In his “Opinion of the Court,” Chief Justice Taney held that Congress has no power to pass general laws to regulate the territories. He also held that the Missouri Compromise unconstitutionally deprived southerners of their property in slaves without due process of law or just compensation, in violation of the Fifth Amendment. By implication, this also meant that no territorial legislature could ever ban slavery in a federal territory, which in turn undermined the concept of “popular sovereignty” that the leading northern Democrat, Stephen A. Douglas, had developed during the debate over the Compromise of 1850 as a way of solving the problem of slavery in the western territories. Under Dred Scott, slavery would be legal in all the federal territories and could be prohibited only at statehood. This part of the decision shocked northerners who had long seen the Missouri Compromise as a central piece of legislation for organizing the settlement of the West and for accommodating differing sectional interests. It also shocked many northern Democrats who had supported opening up the Kansas and Nebraska territories to slavery under popular sovereignty.

Taney also denied that blacks could ever be citizens of the United States, rhetorically declaring:

The question is simply this: Can a negro, whose ancestors were imported into this country, and sold as slaves, become a member of the political community formed and brought into existence by the Constitution of the United States, and as such become entitled to all the rights, and privileges, and immunities, guarantied [sic] by that instrument to the citizen? One of which rights is the privilege of suing in a court of the United States in the cases specified in the Constitution.

Ignoring that free black men in most of the northern states, as well as North Carolina, could vote at the time of the ratification of the Constitution, Taney declared that African Americans

are not included, and were not intended to be included, under the word citizens in the Constitution, and can therefore claim none of the rights and privileges which the instrument provides and secures to citizens of the United States. On the contrary, they were at that time [1787–1788] considered as a subordinate and inferior class of beings who had been subjugated by the dominant race, and, whether emancipated or not, yet remained subject to their authority, and had no rights or privileges but such as those who held the power and Government might choose to grant them.

According to Taney blacks were “so far inferior, that they had no rights which the white man was bound to respect.”

Taney's opinion outraged many northerners, especially members of the new Republican Party. Abraham Lincoln attacked the decision throughout his debates with Stephen A. Douglas in 1858. His articulate critique of the decision catapulted him to the presidential nomination in 1860. The decision led many Republicans to support black citizenship and fundamental rights for blacks and others to argue for black equality and suffrage.

For Frederick Douglass, the opinion was both an outrage and a call to increase efforts to end slavery. In an 1857 speech he argued that this “judicial incarnation of wolfishness” made his hopes “brighter” than ever before because the “open, glaring, and scandalous tissue of lies” found in the decision would serve the cause of liberty in the long run. He declared that

we, the abolitionists and colored people, should meet this decision, unlooked for and monstrous as it appears, in a cheerful spirit. This very attempt to blot out forever the hopes of an enslaved people may be one necessary link in the chain of events preparatory to the downfall and complete overthrow of the whole slave system.

Douglass used the decision to denounce the followers of the abolitionist William Lloyd Garrison, who argued that the Constitution was proslavery and thus that abolitionists should reject political action. Garrisonians wanted northerners to secede from the Union. Douglass countered that the Constitution was not proslavery but that Taney's opinion was wrong and should be overturned by a combination of political action and appeals to God and conscience:

Such a decision cannot stand. God will be true though every man be a liar. We can appeal from this hell-black judgment of the Supreme Court, to the court of common sense and common humanity. We can appeal from man to God. If there is no justice on earth, there is yet justice in heaven. You may close your Supreme Court against the black man's cry for justice, but you cannot, thank God, close against him the ear of a sympathising world, nor shut up the Court of Heaven. All that is merciful and just, on earth and in Heaven, will execrate and despise this edict of Taney.

While Douglass's rhetoric here seemed overblown at the time, his predictions proved to be remarkably accurate. In less than four years Lincoln was elected president on a platform that included a promise of rejecting Taney's conclusions and guaranteeing that slavery would be excluded from the territories. Southern secession and Civil War followed, and that in turn ended slavery.

Both the Lincoln administration and the Civil War Congress ignored the decision, banning slavery in all the western territories despite Taney's assertion that such an act was unconstitutional. In 1866 Congress sent the Fourteenth Amendment to the states, which declared that all persons born in the nation were citizens of the United States and of the state in which they lived. The ratification of this amendment, in 1868, made the civil rights aspects of Dred Scott a dead letter. The decision nevertheless remains a potent symbol of the denial of civil rights, and the constitutionalization of racism, under the Constitution of 1787.