A version of this article originally appeared in Black Women in America, 2nd ed.

Three-time Emmy Award winner Cicely Tyson was an actress, humanitarian, and activist. She was a woman who exuded strength and dignity and personified excellence, much like the characters she portrayed for more than five decades on the stage, screen, and television. Using her craft as a platform to help rectify the negative images of blacks in Hollywood and the nation, Tyson used her acting to honor and respect the complexity of black womanhood in America. 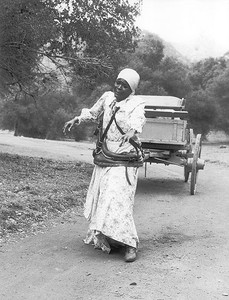 in The Autobiography of Miss Jane Pittman, 1974. This television movie, adapted from a novel by Ernest Gaines, provided the role for which Tyson is most famous.

Tyson was born in East Harlem, New York, and was one of three children born to William and Theodosia Tyson. Her parents were immigrants from Neius, the smallest island in the Caribbean, in the Windward Islands. Although both her parents worked, her father as a carpenter and her mother as a housekeeper, the family faced financial difficulties and relied on welfare to help make ends meet. At the age of nine, Tyson was already working to help supplement the family income by selling shopping bags. When she was ten, her mother left her father and decided to raise the children on her own. Tyson’s mother, a devoutly religious woman, limited the children’s extracurricular activities to church. This upbringing taught Cicely discipline and diligence at a young age. At Saint John’s Episcopal Church, she taught Sunday school, sang, and played the organ. Her musical skills gained increasing recognition, and she became a concert pianist, performing in recital halls throughout New York. Tyson demonstrated her talent and drive for perfection at an early age. Her diligence and hard work translated into young fame, but it was just a precursor to the success she would experience later in life.

After Tyson graduated from Charles Evans Hughes High School in Manhattan, she worked as a secretary for the American Red Cross. It was at this time that her hairdresser, Walter Johnson, asked her to model his hairstyle in a show. Tyson’s striking presence and stunning beauty led Johnson to encourage her to pursue modeling full time. She took his advice and enrolled in the Barbara Watson Modeling School. She was a natural, and success soon followed as she began attending shoots on her lunch breaks and on weekends.

By the 1950s Tyson was one of the top ten black models in the country, earning sixty-five dollars an hour. In 1956, she appeared on the covers of Vogue and Harper’s Bazaar , no small feat for a black woman of the time. One day while waiting for Ebony fashion editor Freda DeKnight, Tyson met the character actress Evelyn Davis, who was immediately drawn to her and encouraged her to read for a lead part in the independent black film Spectrum . The film explored the complicated intraracial issues surrounding skin complexion in the black community. Tyson got the part, but the film was never released. Bitten by the acting bug, she began to search for a reputable acting school that would nurture and shape her talent. She finally decided on the Actor’s Studio at New York University, where she studied under Lloyd Richards and Vinnette Carroll.

Tyson’s theater debut occurred in 1957 when she appeared as Virtue, a prostitute, in Dark of the Moon , a musical directed by Carroll that two years later became part of an off-Broadway revival. While the acting community relished her accomplishments and honored her with the Vernon Rice Award, her mother was disheartened by her performance. Tyson’s acting career grew to be a point of contention between her and her mother, who considered all movies sinful. Content to agree to disagree, Tyson pursued her dream and found an abundance of work both on and off Broadway as well as on television. She appeared in John Effrat’s Broadway variety show Talent 59 and was Eartha Kitt ’s understudy in Jolly Rivers Progress . She made her first motion picture appearance in Twelve Angry Men (1957) with Henry Fonda and had a small role in the film Odds Against Tomorrow (1959).

Tyson’s success continued into the 1960s, and she was honored with two Vernon Rice awards in 1962 for her off-Broadway roles in The Blacks and Moon on a Rainbow Shawl . Tyson was one of the original cast members in Jean Genet’s controversial show The Blacks . The gifted cast included James Earl Jones, Maya Angelou , Lou Gossett Jr., Godfrey Cambridge, and Raymond St. Jacques. Nearly ten years later, Tyson would resurrect her role as Stephanie Virtue Diop in The Blacks and become part of the Playhouse in the Park series in Cincinnati, Ohio. Her performance received recognition from Harvard University, and she became the first actor ever, male or female, black or white, to be honored with a day by the Harvard University Faculty Club.

Although Tyson’s television career started off with small parts, her big break came in 1963 when she co-starred with George C. Scott in East Side/West Side , a CBS mini-series about social workers, making her the first black actress ever to have a continuing role in a dramatic television series. The short natural Afro Tyson flaunted on the show liberated millions of men and women throughout the country, who began to free themselves from chemically processed hair and Eurocentric standards of beauty. Although the show lasted only one season, throughout the 1960s and 1970s Tyson frequently appeared on such shows as I Spy , Naked City , The Nurses , and The Bill Cosby Show .

Early in her career, Tyson refused to sing or dance in a manner that would perpetuate negative stereotypes of black Americans. These same convictions also led her to refuse parts in so-called blaxploitation films, which were growing in popularity at the time.

Her return to the screen, after a four-year leave, occurred in the 1972 film version of William H. Armstrong’s novel Sounder . The character, Rebecca Morgan, allowed her to show the complexity of black life and black womanhood. The film, directed by Martin Ritt, examines the trials and tribulations of a black sharecropper family during the Depression era. Rebecca, a devoted wife and mother, struggles to keep her family together when her husband is sentenced to work on a chain gang for stealing food for the family. Tyson received the Best Actress award from the National Society of Film Critics in 1972 and nominations from both the Academy Awards and the British Academy of Film and Television Arts.

However, the role for which Tyson is probably best remembered is that of Jane Pittman in The Autobiography of Miss Jane Pittman (1974), a made-for-television movie adapted from Ernest J. Gaines’s novel. The part required her to characterize ninety years, from age 19 to 110, of Miss Pittman’s life, capturing her experiences as a slave through her participation in the civil rights movement. In 1974, Tyson received two Emmy Award’s, Best Actress of the Year and Best Lead Actress. In addition, she received the Best Actress award from the Jamaican Black Film Festival for her outstanding work on the movie.

Tyson began to take a number of roles that allowed her to pay tribute to historical figures while also educating the public about race relations in America. For example, she played Binta, Kunta Kinte’s mother in the television mini series Roots (1977); Coretta Scott King in King (1978); and the educator Marva Collin in Welcome to Success: The Marva Collins Story (1981), all roles for which she earned Emmy nominations. In addition, she played the mother of the Olympic track star Wilma Rudolph in Wilma (1977); and her portrayal of Harriet Tubman , conductor on the Underground Railroad, in Woman Called Moses (1978) earned her the Nymph Best Actress Internationally award.

On 26 November 1981, Thanksgiving Day, Tyson married the jazz great Miles Davis. The couple was married in Amherst, Massachusetts, in the home of the best man, Bill Cosby. Tyson and Davis divorced in 1988, three years before his death. Although the marriage was short-lived, Tyson’s career did not suffer. She starred in Cry Freedom (1987), the first movie about Apartheid, and joined a cast of talented women for Oprah Winfrey ’s production of The Women of Brewster Place (1989).

Tyson’s success continued on, decade after decade. At the age of sixty-four, she received her third Emmy for her performance in the television mini series The Oldest Living Confederate Widow Tells All (1994). That same year, she co-starred in the television series Sweet Justice with Melissa Gilbert. Four years later, she portrayed the matriarch Flora Palmer in Mama Flora’s Family (1998). The script was a personal gift from Alex Haley, given to her just three days before he died. She continued to play important and awe-inspiring roles such as Tante Lou in A Lesson Before Dying (1999) and Leona McCauley, Rosa Parks ’s mother, in the television movie The Rosa Parks Story (2000).

The gifts Tyson gave her audiences on stage and screen pale in comparison with the humanitarian and self-sacrificing spirit she exhibited in her daily life. Her commitment to community uplift and social activism permeated every fiber of her being. As a rule, she spent at least one month of the year touring colleges to speak about the importance of education, human rights, self-esteem, and race relations. She appeared at more than six hundred universities. In partnership with Arthur Mitchell, she helped found the Dance Theater of Harlem and was a founding member of the American Conservatory Theatre. On 3 November 1996, the New Jersey Board of Education changed the name of a public middle and high school to the Cicely Tyson School of Performing Arts , located in East Orange. Tyson taught a master class at the school and devoted her time to the seven hundred students, who came mostly from underprivileged families.

Tyson, a member of Delta Sigma Theta sorority, won twelve Image awards from the NAACP and was recognized by PUSH, the Southern Christian Leadership Conference, the National Council of Negro Women, and the Martin Luther King Jr. Center, for her commitment to civil rights. In addition, she held honorary doctorates from Marymount College, Atlanta, Fisk, Loyola, Lincoln, Pepperdine, and Seton Hall universities. Tyson actively worked to help eliminate poverty throughout the world, co-chairing the Meal on Wheels campaign with Barbara Walters and Gloria Steinem and traveling internationally as the World Ambassador and Chairperson for UNICEF. She even created a jewelry line of African-inspired jewelry, Jewels of Unity, to share with the world. Her stellar performances, activism, and kind spirit inspired a nation.