taxi driver whose videotaped beating by police officers in March 1991 provoked international outrage, was born in Sacramento, California, to working-class parents. His father was a construction worker and cleaner, and as a child Rodney worked long hours as a cleaner along with his father. His work schedule along with a learning disability contributed to his lack of academic success, and despite considerable athletic ability, he dropped out in 1984 during his senior year of high school. Afterward King found work in construction. During his early adulthood he had two daughters and married Crystal Waters, a woman with two children of her own. Prior to 1991 King was in and out of jail for crimes ranging from robbery to intoxication. 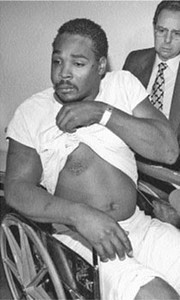 Rodney King shows his bruises on 6 March 1991, after a brutal beating by Los Angeles police.

King became an international celebrity and emblem of police abuse in 1991, when a videotape, shot by the amateur cameraman George Holliday, was broadcast by Los Angeles television station KTLA. The video, taped the night of 3 March, showed King being brutally beaten by members of the Los Angeles Police Department (LAPD) after a high-speed police chase, estimated at 110 to 115 miles per hour. During the course of the abuse, fifty-six baton blows and six kicks from four police officers landed on King's body in a two-minute period as seventeen other LAPD and California Highway Patrol (CHP) officers stood by watching. King suffered eleven skull fractures, broken bones, and brain and kidney damage. After the beating he was taken into custody. Four days after the attack King was released, and the charge of felony evading was dropped.

In response to the spectacle of the King case, numerous political figures in the African American community appeared in the media to discuss the events. The former Democratic presidential candidate and Rainbow Coalition founder Jesse Jackson as well as California's Democratic congresswoman Maxine Waters spoke out against the beatings and demanded public accountability.

On 15 March 1991 the four officers involved in the King beating—Sergeant Stacey C. Koon, Officer Laurence M. Powell, Officer Theodore Briseno, and Officer Timothy Wind—were charged with assault with a deadly weapon and excessive use of force. All four officers pleaded not guilty. In the wake of the growing media coverage and the impending trial, Los Angeles police chief Daryl Gates suspended Koon, Powell, and Briseno without pay. Wind was fired. Despite objections from the prosecution, the Superior Court judge Stanley Weisberg ordered the trial of Koon, Powell, Briseno, and Wind moved from Los Angeles to the community of Simi Valley, which included few African Americans and had a disproportionate number of police officers living in the area. One year after the initial beating, the trial for the four police officers began on 5 March 1992. On 29 April a majority white jury found three officers not guilty on all counts; the jury could not agree on a verdict for Powell.

The not guilty verdict sparked the event known as the Los Angeles riots. Looting and violence brewed for six days, overwhelming the city. The riots were one of the greatest civil unrests in California history and the first large-scale, primarily African American rebellion since the Watts riots of 1965. Local and national officials took measures to stem the violence; citywide curfews were instituted by then mayor Tom Bradley. Governor Pete Wilson moved four thousand army and marine troops into the city, and President George H. W. Bush federalized the National Guard. Attacks on nonrioting men and women made national headline news. Among the stories was the attack of Reginald Denny, who was pulled from his truck as he stopped to avoid hitting looters and beaten. In total sixty people were killed, and more than two thousand were injured as a result of the rioting. Over eight thousand people were arrested, and there was an estimated $1 billion worth of damage to the city of Los Angeles.

The incident continued to be a matter for the courts. Despite a not guilty verdict in criminal court, federal charges were filed against the officers. In 1993 Koon and Powell were convicted of violating King's civil rights. They both served thirty months in federal prison. King also pursued a civil suit against the city of Los Angeles and in 1994 was awarded $3.8 million in damages. A significant amount of his settlement went to legal fees, but King also used the money to start his own record label, Straight Alta-Pazz Recording Company. The events of 1991 made King a reluctant star. On 1 May 1992, in front of national cameras, he made his famous plea in response to the rioting, “Can we all get along?” a comment often used in black popular culture by comedians and political figures alike. By the end of 1992 his name became a byword for police brutality in the United States. After the trial King joined his daughters outside of Los Angeles. He earned his high school equivalency diploma and went back to a career in construction. He continued to have trouble with the law. In 1991 and 1992 he was arrested for soliciting and domestic abuse, but no charges were filed. Over the next ten years he was arrested for crimes of domestic abuse, vandalism, and driving under the influence.

In April 2012, HarperOne published King's memoir, The Riot Within: My Journey from Rebellion to Redemption, in which he claimed that his life was headed in a positive direction with new fiancée Cynthia Kelley, who had been a juror in the civil suit he brought against city of Los Angeles. Two months later, however, Kelly found King lying motionless at the bottom of the swimming pool at the house they shared in Rialto, California. Paramedics rushed him to the hospital, where he was pronounced dead.