was born Rosa Louise McCauley in Tuskegee, Alabama, the daughter of James McCauley, a carpenter, and Leona Edwards, a teacher. Her father migrated north when Rosa was two years old, and her mother schooled her at home until, at age eleven, she enrolled in the Montgomery Industrial School for Girls. She attended Alabama State Teacher's High School, but left before graduation to care for her mother. On 18 December 1932 Rosa Louise McCauley married Raymond Parks, a barber from Wedowee in Randolph County, Alabama. With her husband's encouragement, Parks completed her high school education 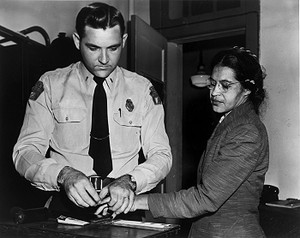 Rosa Parks. This booking photo was taken 22 February 1956, after Parks was arrested for refusing to give up her seat on a bus to a white passenger on 1 December 1955 in Montgomery, Alabama, inciting what would become the Montgomery Bus Boycott.

in 1934. A member of the St. Paul AME Church, she was responsible for preparing Holy Communion.

From the beginning of their marriage Raymond and Rosa Parks embraced social activism, working, for example, to secure the release of the Scottsboro Boys , nine black youths accused of raping two white girls. During the 1940s Rosa Parks joined the Montgomery chapter of the NAACP, and as secretary of the branch from 1943 until 1956 she often hosted the organization's dynamic field secretary, Ella Baker , when she visited Montgomery. E. D. Nixon , organizer of the Black Brotherhood of Sleeping Car Porters Union in Montgomery and head of the Progressive Democrats, was president of the local NAACP chapter.

Rosa Parks proved adept at working with young people. She helped train a group of NAACP youths to protest segregation in the Montgomery Public Library, and she participated in voter registration drives. Indeed, in 1945 Parks became one of just a few African Americans who were registered to vote in Montgomery. The registrar had failed her the first two times she took the literacy text. The same determination displayed in her pursuit of the vote surfaced when Parks chose to be arrested rather than to abide segregation on Montgomery's buses. It is important to underscore the extent to which Parks was anchored to the organizational and institutional infrastructure of the Montgomery black community. This is essential to understanding why she was able to inspire the modern civil rights movement.

Weary of the daily humiliations of second-class citizenship and the indignity of Jim Crow racial subordination, on 1 December 1955, the bespectacled and composed Rosa Parks refused to comply with the bus driver James F. Blake's order that she give the bus seat she occupied in the first row of the black section to a white male passenger. Three other African Americans vacated their seats, but Parks refused to move. The city's complex segregation laws dictated that African Americans pay their fares, exit the bus, and reenter through the rear door. Whites enjoyed the privilege of sitting in the front of the bus, and blacks occupied reserved seats in the rear. If the white section filled up and more white passengers boarded the bus, the black passengers were required to move.

Parks had not planned to disobey the law on that fateful day, but her thirty-year commitment to social justice prepared her to do so. Indeed, in June 1955 Parks had attended a summer workshop at the Highlander Folk School founded by Myles Horton in Monteagle, Tennessee, which had long been a training ground for labor organizers and social activists. In 1959 the State of Tennessee would label the Highlander Folk School a subversive organization. Still, at Highlander, Parks, like her fellow activists Ella Baker and Septima Clark , acquired a deeper appreciation of and skills for community organizing, use of direct-action tactics, and administration of citizenship schools. Their preparation and long involvement in community affairs placed black women at the center of the civil rights movement.

For her defiance of the segregation ordinance, the Montgomery police hauled Parks off to jail. Montgomery's police lieutenant, Drue Lackey (who served as police chief from 1965 to 1970), took her fingerprints. Responding to a call from Nixon, the white attorney Clifford Durr took her case, but Nixon posted her bail. The court found Parks guilty of disorderly conduct and fined her ten dollars and another four dollars in court costs. Rosa Parks was not the first black woman to have suffered arrest for refusal to countenance bus segregation. In 1941 an angry mob beat Hannah Cofield before she was arrested for refusing to yield her seat to a white passenger. In 1944 Viola White met a similar fate. In March 1955, a few months before Parks's arrest, Claudette Colvin, an unmarried, pregnant fifteen-year-old girl, had objected to vacating her seat and was jailed.

The local black leadership had long debated challenging bus segregation, but decided to wait for an incident involving someone who embodied the politics of respectability and whose private life could withstand relentless scrutiny. Thus, although Cofield, White, Colvin, and later, Mary Louise Smith, protested bus segregation, their resistance failed to ignite a larger social protest movement. Propitiously, in July 1955, the U.S. Court of Appeals in Richmond, Virginia, declared in Flemming v. South Carolina Electric and Gas Company that bus segregation, even on buses that operated within one state, was unconstitutional.

When the police arrested Rosa Parks, diverse factions within the Montgomery black community swung into nonviolent direct action. On 2 December 1955 the Women's Political Council (WPC), under the leadership of Jo Ann Robinson , an English professor at Alabama State College, mimeographed and, with two hundred volunteers, distributed more than thirty thousand handbills imploring black citizens to stay off the buses. The flyer declared: “Another Negro woman has been arrested and thrown into jail, because she refused to get up out of her seat on the bus for a white person to sit down…. Negroes have rights, too, for if Negroes did not ride the buses, they could not operate…. The next time it may be you, or your daughter, or mother” (Robinson, 45–46).

Actually, the WPC had long prepared to declare a boycott. Black leaders called a mass meeting at Holt Street Baptist Church and voted to continue the boycott under the aegis of the newly formed Montgomery Improvement Association (MIA). A number of women served on the MIA executive committee, including Robinson and Parks and Erna Dungee Allen, who served as financial secretary. A young minister of Dexter Avenue Baptist Church, the Reverend Martin Luther King Jr. , accepted the presidency of the MIA and led the discussions and negotiations with white authorities. Parks's arrest sparked the bus boycott movement that began on 5 December 1955 and lasted 381 days, ending on 20 December 1956. The black attorney Fred D. Gray , on behalf of the MIA, filed a lawsuit against segregation in federal court on 1 February 1956. On 2 June 1956 in a 2 to 1 decision, the federal court found the Montgomery bus segregation ordinances to be unconstitutional. On appeal, on 13 November 1956, the U.S. Supreme Court concurred with the federal court, ruling that racial segregation on public transportation in Montgomery and throughout the South was unconstitutional.

Parks's successful challenge to racial segregation attracted threats of violence and harassment and resulted in the loss of her job as a seamstress at Montgomery Fair Department Store. In 1957 Raymond and Rosa Parks and Rosa's mother joined her younger brother, Sylvester, in Detroit to seek jobs and personal security. For several years Rosa Parks worked as a seamstress. In 1965 she accepted a special assistant position on the staff in the Detroit office of Representative John Conyers Jr. She remained in his employ for nearly twenty years, during which time she assisted Conyers in his efforts to make Martin Luther King Jr.'s birthday a national holiday. In 1977 Parks's husband and brother died. Ten years later she and a friend, Elaine Eason Steele, founded a nonprofit organization, the Raymond and Rosa Parks Institute for Self-Development, to honor her husband's memory and commitment to the struggle for social justice and human rights.

In the last decades of the century Parks received national recognition for her role in the civil rights movement. The NAACP gave her its highest honor, the Spingarn Award, in 1977. She also received the Presidential Medal of Freedom, the nation's highest civilian honor. On 15 June 1999 Parks was awarded the Congressional Gold Medal. In introducing the bill authorizing the award, Representative Julia Carson of Indiana declared: “Rosa Parks is the Mother of America's Civil Rights Movement. Her quiet courage that day in Montgomery, Alabama launched a new American revolution that opened new doors of opportunity and brought equality for all Americans close to a reality” (“Carson Calls for Cosponsors for Bill to Award Congressional Gold Medal to Rosa Park,” 24 Feb. 1999). On 24 October 2005 Parks died of natural causes at her home; she was ninety-two. After lying in honor in the Capitol Rotunda (the first woman to be so honored), Parks was laid to rest in Detroit, Michigan. Her funeral was attended by more than four thousand mourners.