Islamic minister and political leader, also known as el-Hajj Malik el-Shabazz, was born Malcolm Little in Omaha, Nebraska, the fourth of five children of Earl Little and Louise (also Louisa) Norton, both activists in the Universal Negro Improvement Association established by Marcus Garvey . Earl Little, a Georgia-born itinerant Baptist preacher, encountered considerable racial harassment because of his black nationalist views. He moved his family several times before settling in Michigan, purchasing a home in 1929 on the outskirts of East Lansing, where Malcolm spent his childhood. Their previous home had been destroyed in a mysterious fire. In 1931 Earl Little's body was discovered on a train track. Although police concluded that the death was accidental, the victim's friends and relatives suspected that he had been murdered by a local white-supremacist group. Earl's death left the family in poverty and undoubtedly contributed to Louise Little's mental deterioration. In January 1939 she was declared legally insane and committed to a Michigan mental asylum, where she remained until 1963.

Although Malcolm Little excelled academically in grammar school and was popular among classmates at these predominantly white schools, he also became embittered toward white authority figures. In his autobiography he recalls quitting school in the eighth grade after a teacher warned that his desire to become a lawyer was not a “realistic goal for a nigger.” As his mother's mental health deteriorated and he became increasingly incorrigible, welfare officials intervened, placing him in several reform schools and foster homes. In 1941 he left Michigan to live in Boston with his half sister, Ella Collins. 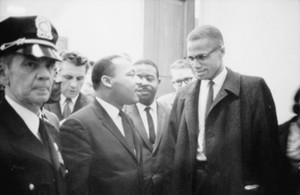 In Boston and New York during the early 1940s, Malcolm held a variety of railroad jobs while also becoming increasingly involved in criminal activities, such as peddling illegal drugs and numbers running. At this time he was often called Detroit Red because of his reddish hair. First arrested in 1944 for larceny and given a three-month suspended sentence and a year's probation, Malcolm was arrested again in 1946 for larceny as well as breaking and entering. When the judge learned that Malcolm was involved in a romantic relationship with a white woman, he imposed a particularly severe sentence of from eight to ten years in prison. While in Concord Reformatory in Massachusetts, Malcolm responded to the urgings of his brother Reginald and became a follower of Elijah Muhammad (formerly Robert Poole), leader of the Temple of Islam (later Nation of Islam—often called the Black Muslims), a small black nationalist Islamic sect. Attracted to the religious group's racial doctrines, which categorized whites as “devils,” he began reading extensively about world history and politics, particularly concerning African slavery and the oppression of black people in America. After he was paroled from prison in August 1952, he became Malcolm X, using the surname assigned to him in place of the African name that had been taken from his slave ancestors.

By 1953 Malcolm X had become Elijah Muhammad's most effective minister, bringing large numbers of new recruits into the group during the 1950s and early 1960s. By 1954 he had become minister of New York Temple No. 7, and he later helped establish Islamic temples in other cities. In 1957 he became the Nation of Islam's national representative, a position of influence second only to that of Elijah Muhammad. In January 1958 he married Betty X (Sanders), who later became known as Betty Shabazz ; together they had six daughters.

Malcolm's cogent and electrifying oratory attracted considerable publicity and a large personal following among discontented African Americans. In his speeches he urged black people to separate from whites and win their freedom “by any means necessary.” In 1957, after New York police beat and jailed the Nation of Islam member Hinton Johnson, Malcolm X mobilized supporters to confront police officials and secure medical treatment. A 1959 television documentary on the Nation of Islam, called The Hate That Hate Produced, further increased Malcolm's notoriety among whites. In 1959 he traveled to Europe and the Middle East on behalf of Elijah Muhammad, and in 1961 he served as Muhammad's emissary at a secret Atlanta meeting seeking an accommodation with the Ku Klux Klan. The following year he participated in protest meetings prompted by the killing of a Black Muslim during a police raid on a Los Angeles mosque. By 1963 he had become a frequent guest on radio and television programs and was the most well- known figure in the Nation of Islam.

Malcolm X was particularly harsh in his criticisms of the nonviolent strategy to achieve civil rights reforms advocated by Martin Luther King Jr. His letters seeking King's participation in public forums were generally ignored by King. During a November 1963 address at the Northern Negro Grass Roots Leadership Conference in Detroit, Michigan, Malcolm derided the notion that African Americans could achieve freedom nonviolently. “The only revolution in which the goal is loving your enemy is the Negro revolution,” he announced. “Revolution is bloody, revolution is hostile, revolution knows no compromise, revolution overturns and destroys everything that gets in its way.” Malcolm also charged that King and other leaders of the recently held March on Washington had taken over the event, with the help of white liberals, in order to subvert its militancy. “And as they took it over, it lost its militancy. It ceased to be angry, it ceased to be hot, it ceased to be uncompromising,” he insisted. Despite his caustic criticisms of King, Malcolm nevertheless identified himself with the grassroots leaders of the southern civil rights protest movement. His desire to move from rhetorical to political militancy led him to become increasingly dissatisfied with Elijah Muhammad's apolitical stance. As he later explained in his autobiography, “It could be heard increasingly in the Negro communities: ‘Those Muslims talk tough, but they never do anything, unless somebody bothers Muslims.’”

Malcolm's disillusionment with Elijah Muhammad resulted not only from political differences but also from his personal dismay when he discovered that the religious leader had fathered illegitimate children. Other members of the Nation of Islam began to resent Malcolm's growing prominence and to suspect that he intended to lay claim to leadership of the group. When Malcolm X remarked that President John Kennedy's assassination in November 1963 was a case of the “chickens coming home to roost,” Elijah Muhammad used the opportunity to ban his increasingly popular minister from speaking in public.

Despite this effort to silence him, Malcolm X continued to attract public attention during 1964. He counseled the boxer Cassius Clay, who publicly announced, shortly after winning the heavyweight boxing title, that he had become a member of the Nation of Islam and adopted the name Muhammad Ali . In March 1964 Malcolm announced that he was breaking with the Nation of Islam to form his own group, Muslim Mosque, Inc. The theological and ideological gulf between Malcolm and Elijah Muhammad widened during a monthlong trip to Africa and the Middle East. During a pilgrimage to Mecca on 20 April 1964 Malcolm reported that seeing Muslims of all colors worshiping together caused him to reject the view that all whites were devils. Repudiating the racial theology of the Nation of Islam, he moved toward orthodox Islam as practiced outside the group. He also traveled to Egypt, Lebanon, Nigeria, Ghana, Senegal, and Morocco, meeting with political activists and national leaders, including the Ghanaian president Kwame Nkrumah. After returning to the United States on 21 May, Malcolm announced that he had adopted a Muslim name, el-Hajj Malik el-Shabazz, and that he was forming a new political group, the Organization of Afro-American Unity (OAAU), to bring together all elements of the African American freedom struggle.

Determined to unify African Americans, Malcolm sought to strengthen his ties with the more militant factions of the civil rights movement. Although he continued to reject King's nonviolent, integrationist approach, he had a brief, cordial encounter with King on 26 March 1964 as the latter left a press conference at the U.S. Capitol. The following month, at a symposium in Cleveland, Ohio, sponsored by the Congress of Racial Equality (CORE), Malcolm X delivered one of his most notable speeches, “The Ballot or the Bullet,” in which he urged black people to submerge their differences “and realize that it is best for us to first see that we have the same problem, a common problem—a problem that will make you catch hell whether you're a Baptist, or a Methodist, or a Muslim, or a nationalist.”

What Is Your Name?

Malcolm X famously asks "What is your name?"

When he traveled again to Africa during the summer of 1964 to attend the Organization of African Unity Summit Conference, he was able to discuss his unity plans at an impromptu meeting in Nairobi with leaders of the Student Nonviolent Coordinating Committee (SNCC). After returning to the United States in November, he invited Fannie Lou Hamer and other members of the Mississippi Freedom Democratic Party to be guests of honor at an OAAU meeting held the following month in Harlem, New York. Early in February 1965 he traveled to Alabama to address gatherings of young activists involved in a voting rights campaign. He tried to meet with King during this trip, but the civil rights leader was in jail; instead, Malcolm met with Coretta Scott King , telling her that he did not intend to make life more difficult for her husband. “If white people realize what the alternative is, perhaps they will be more willing to hear Dr. King,” he explained.

Malcolm's political enemies multiplied within the U.S. government as he attempted to strengthen his ties with civil rights activists and deepen his relationship with Adam Clayton Powell Jr., James Baldwin , Dick Gregory , and black leaders around the world. The Federal Bureau of Investigation saw Malcolm as a subversive and initiated efforts to undermine his influence. In addition, some of his former Nation of Islam colleagues, including Louis X (later Louis Farrakhan ), condemned him as a traitor for publicly criticizing Elijah Muhammad. The Nation of Islam attempted to evict Malcolm from the home he occupied in Queens, New York. On 14 February 1965 Malcolm's home was firebombed; although he and his family escaped unharmed, the perpetrators were never apprehended.

On 21 February 1965 members of the Nation of Islam shot and killed Malcolm as he was beginning a speech at the Audubon Ballroom in New York City. On 27 February more than fifteen hundred people attended his funeral service held in Harlem and Ossie Davis gave a moving eulogy that contrasted the public's perception of an angry Malcolm with the loving and gentle man he knew, a person who gave voice to the pain of his people and gave courage to those who were afraid to speak the truth. Although three men were convicted in 1966 and sentenced to life terms, one of those involved, Thomas Hagan, filed an affidavit in 1977 insisting that his actual accomplices were never apprehended.

After his death, Malcolm's views reached an even larger audience than during his life. The Autobiography of Malcolm X, written with the assistance of Alex Haley , became a best-selling book following its publication in 1965. During subsequent years other books appeared, containing texts of many of his speeches, including Malcolm X Speaks (1965), The End of White World Supremacy: Four Speeches (1971), and February 1965: The Final Speeches (1992). In 1994 Orlando Bagwell and Judy Richardson produced a major documentary, Malcolm X: Make It Plain. His words and image also exerted a lasting influence on African American popular culture, as evidenced in the hip-hop or rap music of the late twentieth century and in the director Spike Lee 's film biography, Malcolm X (1992).