philosopher and literary critic, was born in Philadelphia, Pennsylvania, the son of Pliny Ishmael Locke, a lawyer, and Mary Hawkins, a teacher and member of the Felix Adler Ethical Society. Locke graduated from Central High School and the Philadelphia School of Pedagogy in Philadelphia in 1904. That same year he published his first editorial, “Moral Training in Elementary Schools,” in the Teacher, and entered undergraduate school at Harvard University. He studied at Harvard under such scholars as Josiah Royce, George H. Palmer, Ralph B. Perry, and Hugo Münsterberg before graduating in 1907 and becoming the first African American Rhodes scholar, at Hertford College, Oxford. While in Europe, he also attended lectures at the University of Berlin (1910–1911) and studied the works of Franz Brentano, Alexius Meinong, and C. F. von Ehrenfels. Locke associated with other Rhodes scholars, including Horace M. Kallen, author of the concept of cultural pluralism; H. E. Alaily, president of the Egyptian Society of England; Pa Ka Isaka Seme, a black South African law student and eventual founder of the African National Congress of South Africa; and Har Dayal from India—each concerned with national liberation in their respective homelands. The formative years of Locke's education and early career were the years just proceeding and during World War I—years of nationalist uprising and wars between the world's major nation-states. Locke joined the Howard University faculty in 1912, to eventually form the most prestigious department of philosophy at a historically African American university.

In the summer of 1915 Locke began a lecture series sponsored by the Social Science Club of the National Association for the Advancement of Colored People, titled “Race Contacts and Interracial Relations: A Study of the Theory and Practice of Race.” Locke argued against social Darwinism, which held that distinct races exist and are biologically determined to express peculiar cultural traits. Locke believed that races were socially constructed and that cultures are the manifestation of stressed values, values always subject to transvaluation and revaluation. Locke introduced a new way of thinking about social entities by conceiving of race as a socially formed category, which, despite its foundation in social history, substantively affected material reality.

Locke received his doctorate in Philosophy from Harvard in 1918 and shortly thereafter wrote “The Role of the Talented Tenth,” which supported W. E. B. Du Bois 's idea that the upward mobility of approximately one-tenth of a population is crucial for the improvement of the whole population. Locke also became interested in the Baha'i faith, finding particularly attractive its emphasis on racial harmony and the interrelatedness of all religious faiths. Locke attended the 1921 Inter-Racial Amity conference on 19–21 May in Washington, D.C., and as late as 1932 published short editorials in the Baha'i World. Although he did not formally join the Baha'i faith, he remained respectful of its practices.

Locke went on to help initiate the Harlem Renaissance, a period of significant cultural contributions by African Americans. The years 1924–1925 were a major turning point in Locke's life. He edited a special edition of the magazine Survey titled the Survey Graphic, on the district of Harlem in New York City. The editor of Survey was Paul U. Kellogg, and the associate editor was Jane Addams. That edition became the source for his seminal work reflecting the nature of valuation and the classicism of African American culture, The New Negro: An Interpretation of Negro Life, published in 1925. The New Negro included a collage of art by Winold Reiss and Aaron Douglas and representations of African artifacts, articles by J. A. Rogers , E. Franklin Frazier , Charles S. Johnson , Melville J. Herskovits, and Du Bois, poetry by Countée Cullen , Langston Hughes , Arna Bontemps , and Angelina Weld Grimké , spirituals, and bibliographies. The New Negro was intended as a work “by” rather than “about” African Americans, a text exuding pride, historical continuity, and a new spirit of self-respect not because a metamorphosis had occurred in the psychology of African Americans, “but because the Old Negro had long become more of a myth than a man.” The New Negro embodied Locke's definition of essential features of African American culture, themes such as the importance of self-respect in the face of social denigration; ethnic pride; overcoming racial stereotypes and idioms, such as call-and-response in the spirituals or discord and beats in jazz; and the importance that cultural hybridity, traditions, and revaluations play in shaping cross-cultural relationships. Locke promoted those features of African American folk culture that he believed could be universalized and thus become classical idioms, functioning, for Locke, as cultural ambassadors encouraging cross-cultural and racial respect. As debates over how to characterize American and African American cultural traits in literature became less a source of intellectual conflict, Locke's interests moved on to issues in education. 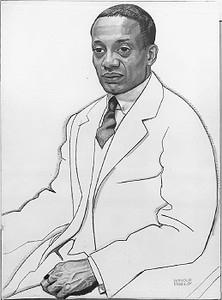 Alain Leroy Locke produced influential writings in the areas of philosophy, art, aesthetics, and education between the 1920s and the 1950s

In 1936 Locke began work on a book series, the Bronze Booklets on the History, Problems, and Cultural Contributions of the Negro, under the auspices of the Associates in Negro Folk Education. Eight booklets were published in the series, which became a standard reference for the teaching of African American history. In one of his frequent book reviews of African American literature for Opportunity: A Journal of Negro Life, Locke supported the controversial novel by Richard Wright , Native Son, in 1941. The novel was controversial because Wright did not portray the lead character, Bigger Thomas, as a peace-loving, passive, and victimized African American, but as a critic of liberals and radicals. Locke's support for Wright's novel represented his belief that race divided America.

Locke published his first extensive article on his philosophy in 1935, “Values and Imperatives,” in American Philosophy: Today and Tomorrow, edited by Horace M. Kallen and Sidney Hook. Locke argued that values are inherently unstable, always subject to transvaluation and transposition. Locke contended that “All philosophies, it seems to me, are in ultimate derivation philosophies of life and not of abstract, disembodied ‘objective’ reality; products of time, place, and situation, and thus systems of timed history rather than timeless eternity” (313). Rather than believe that science is an adequate model for reasoning about social reality, Locke presented the view that knowledge is a function of experience and the categories of logic, science, math, and social science are heuristic value fields or distinctions.

Locke published his landmark work on education, “The Need for a New Organon in Education,” in Findings of the First Annual Conference on Adult Education and the Negro (1938), based on a lecture before the American Association for Adult Education, the Extension Department of Hampton Institute, and the Associates in Negro Folk Education, in Hampton, Virginia, on 20–22 October 1938. Locke proposed the concept of critical relativism (the view that there are no absolutely true propositions, but that we can have standards and criteria for critical evaluations). Locke warned against believing that all relevant knowledge can be acquired through application of formal logic and argued for the need to apply functional methods of reasoning and the importance of value judgments in considering defensible beliefs. Locke actively promoted adult education, working with the American Association of Adult Education in Washington, D.C., from 1948 to 1952.

In 1942 Locke edited, along with Bernard J. Stern, When Peoples Meet: A Study of Race and Culture. This anthology used a concept of ethnicity to account for both ethnic and racial contacts. Locke's approach continued his view that racial identities were socially created and were not based on substantive biological categories.

In 1944 Locke became a founding conference member of the Conference on Science, Philosophy and Religion, which published its annual proceedings of debates on the relationship of these areas of thought. He promoted the idea that cultural pluralism was an analogue for why one knowledge field was an insufficient reasoning model for sure knowledge, in other words that different cultures and civilizations supported laudable values just as different disciplines could sustain different spheres of knowledge. For Locke, there was no reason to believe in a unified theory of knowledge—a theory that would tell us about the nature of all forms of knowledge. Rather, a plurality of fields of knowledge and cultural values was a preferable perspective on Locke's account.

Locke was a controversial figure. His aesthetic views contrasted with those of the Black Aesthetic Movement of the 1970s. He was satirized in novels, criticized by Zora Neale Hurston as an elitist interested in controlling the definition of African American culture, reproached for failing to acknowledge the largest Pan-African movement of the 1920s, the Marcus Garvey –led Universal Negro Improvement Association, and denounced for placing too great a value on African American literature as a text representing a unique cultural texture.

Locke died in New York City. He lived a controversial life because his ideas of values, race, and culture often challenged popular ideas. His concept of pragmatism was critical of, and different from, the dominant forms represented by William James and John Dewey. Locke's effort to shape the Harlem Renaissance and define the “New Negro” went against those who believed folk culture should not be changed, and his advocacy of value-oriented education within the adult education movement was viewed as a new orientation. Locke's philosophy, promoted by the Alain L. Locke Society, remains a source of controversy and debate.