U.S. congresswoman, was born Shirley St. Hill in Brooklyn, New York, the eldest daughter of Charles St. Hill, a laborer born in British Guiana (now Guyana), and Ruby Seale, a seamstress born in Barbados. Shirley's first three years were spent in Brownsville, a predominantly Jewish area of Brooklyn. Finding the wages for unskilled factory work insufficient to care for three children properly, the St. Hills sent their three daughters to Barbados, where they lived with their maternal grandparents on the family farm. Shirley credits her grandmother Emily Seale with instilling in her a strong character and determination.

The girls returned to Brownsville in 1934, after their mother gave birth to another daughter. Despite the social and financial hardships of the Depression, Ruby encouraged her children to respect the values of civility, thrift, poise, humility, education, and spirituality, though the sisters endured a substantial amount of teasing in the neighborhood for upholding these values and the sense of decorum and respectability that their parents expected of them. Charles St. Hill's influence on Shirley's political development was also profound. His support for Marcus Garvey and his pride in his labor union were frequent dinner table discussion topics, and in her autobiography Chisholm recalls that she went to listen to many black nationalist orators with her father. 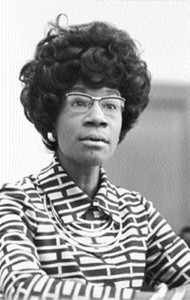 Shirley Chisholm in January 1972. Chisholm gained national recognition when she announced her intention to run for the presidency of the United States.

In 1936 the family moved to the Bedford-Stuyvesant area of Brooklyn, where the Caribbean and southern black residents constituted about half of the population. Unaccustomed to the animosity blacks faced in that neighborhood, Shirley felt the sting of racial epithets for the first time. During this time she also became aware of racial discrimination, when her father's workdays in a burlap bag factory were inequitably reduced. As a result, Ruby was forced to find work as a domestic, leaving Shirley with the responsibility of looking after the home and caring for her younger sisters. Shirley entered Girls High School in 1939 but was still guarded closely by her parents. Shy and self-conscious because of her West Indian accent, she became a voracious reader, maintained superior marks in school, and was elected vice president of a girl's honor society. Determined to pursue a career in teaching, one of the few career options available to black women at that time, Shirley entered Brooklyn College in September 1942. Motivated by her increasing awareness of the racism at the college, she shed her shyness, joined the debating society, and began to speak out on racial issues. She also became active in the Harriet Tubman Society for Negro History and formed Ipothia, a sorority for black women. Believing that “service is the rent we pay for the privilege of living on this earth” (a phrase also attributed to Marian Wright Edelman ), Shirley St. Hill volunteered with the Urban League and the NAACP, in hospitals, and at a home for the aged. While still in college, she publicly challenged the mostly Irish American organization that ran Brooklyn's old Seventeenth Assembly District for ignoring issues of concern to African Americans, even though two-thirds of the district's constituents were black.

In 1953 she became director of the Friends in Need Nursery School in Brooklyn, but moved on after one year to become the director of the Hamilton-Madison Child Care Center on Manhattan's Lower East Side. By 1959 she had become a program consultant for the New York City Division of Day Care, but she continued her community work in Bedford-Stuyvesant, setting up youth programs for children, petitioning for better postal service and sanitation, and serving on the board of directors of the Albany Houses public housing project. Through these activities she became involved with New York's political clubs, which were organized by state assembly districts. In 1953 Chisholm joined with her political mentor Wesley McD. “Mac” Holder to help elect the first black judge in Brooklyn's history. Through that effort, the Bedford-Stuyvesant Political League (BSPL) was launched, and Chisholm remained active in this club as well as the regular Democratic organization. In 1958 Chisholm unsuccessfully challenged Mac Holder for the presidency of the BSPL, which caused a schism between them for ten years.

Chisholm was inactive on the political scene for two years following her loss to Mac Holder, but she soon returned to politics to help form the Unity Democratic Club. The primary goal of this club was to oust the white political machine of the Seventeenth Assembly District. Victorious in this mission, Unity became the official Democratic club for the district, and in 1964 Unity nominated Chisholm to fill a vacated seat in the New York State Assembly. She was elected to the assembly, but her victory was marred by her father's death during the campaign.

Chisholm soon earned a reputation in Albany as a maverick who voted her conscience and frequently went against the party line. During her tenure, she introduced more than fifty bills into the legislature, of which eight passed. The most notable of these was her creation of the SEEK (Search for Education, Elevation and Knowledge) program, which enabled financially disadvantaged students to attend college. She also was a powerful advocate of extending unemployment insurance coverage to domestic employees and of providing state aid to day-care centers.

Determined to beat the political machine that had emerged in Brooklyn's newly created black-majority Twelfth District, Chisholm ran for Congress in 1968. Reuniting with Mac Holder, she campaigned with the slogan “Fighting Shirley Chisholm—Unbought and Unbossed.” Emergency surgery for a stomach tumor caused Chisholm to lose some early ground to her opponent, the civil rights activist James Farmer . Finding, however, that there were two and a half women for every man on the voter-registration rolls, Chisholm garnered the support of women's organizations. Her fluency in Spanish also attracted the Hispanic vote, thus providing an ultimately victorious block against her Republican opponent.

As a freshman representative to the Ninety-first Congress in 1969, Chisholm asked to be assigned to the House Education and Labor Committee. Instead, she was assigned to the Committee for Rural Development and Forestry, whose agenda was totally unrelated to the needs of her urban district. After failing in her attempts to enlist the support of more senior representatives, she defiantly approached the Speaker's dais to protest the assignment. Again, her diligence paid off, and she was reassigned to the Committee on Veterans Affairs. In 1971 she secured a seat on the powerful House Education and Labor Committee, which enabled her to focus on the economic and educational issues of greatest relevance to her constituents.

Chisholm became increasingly well known on Capitol Hill for her straightforward criticism of cozy bipartisan politics and the seniority system. In the late 1960s, the tap of Chisholm's trademark stiletto heels struck a dissonant chord in the boys club atmosphere of the U.S. Congress. Her unabashed and uncompromising liberalism also stood out, even in that relatively liberal era. She fought passionately for greater racial and gender equality, demanded a lowering of the voting age, spoke out against the Vietnam War, and supported the National Association for the Repeal of Abortion Laws. In 1970 Chisholm headed a coalition of women's groups to raise bail for a jailed Black Panther Party member.

Chisholm gained national recognition in January 1972, when she announced her intention to run for the presidency of the United States. Inspired by the young people with whom she maintained constant contact, she campaigned in six states while continuing to attend to her duties in Washington and Brooklyn. She did not receive the support of the Congressional Black Caucus, however, which severely dented her chance of winning the Democratic nomination. But her impressive showing of 151 votes to George McGovern's 1,415 constituted the largest number of convention votes cast for a female candidate in U.S. party political history.

Continuing to serve in the House of Representatives, Chisholm emerged as a powerful advocate for fair housing programs and the educational rights of the poor and racial minorities. Her most significant legislative achievement came in the mid 1970s, when she successfully led the opposition in Congress to President Ford's veto of federal support for state daycare services. By the time Chisholm retired from Congress in 1982, however, she had become less of a maverick, and, as a member of its Rules Committee, even something of a Capitol Hill insider.

She subsequently held faculty appointments at Mount Holyoke College, Massachusetts, where she taught politics and women's studies from 1983 to 1987, and at Spelman College in Atlanta, Georgia, where she was a visiting scholar in 1985. Chisholm authored two autobiographies, Unbought and Unbossed (1970) and The Good Fight (1973), and in 1984 she cofounded the National Political Congress of Black Women. In 1993 President Bill Clinton asked her to serve as U.S. Ambassador to Jamaica, but she declined the appointment for health reasons. Chisholm retired to Florida with her second husband, Arthur Hardwick, whom she married in 1977. Chisholm died on New Year's Day 2005.

Shirley Chisholm will be remembered as the woman warrior of American politics and as a champion for underrepresented Americans. Charles Rangel and Kweisi Mfume , who followed her into Congress, attained greater political clout on Capitol Hill. Jesse Jackson earned more votes and delegates in his 1984 and 1988 campaigns for the Presidency. In each of these cases, however, their task was made easier by the precedents and the example set by Shirley Chisholm.