writer, poet, and performer, was born Marguerite Annie Johnson in St. Louis, Missouri, the second of two children of Bailey Johnson, a doorman and a naval dietician, and Vivian Baxter Johnson, a card dealer who later became a registered nurse. Her parents called her “Rita,” but her brother, Bailey, who was only a year older, called her “My Sister,” which was eventually contracted to “Maya.” When Maya was three years old, she and Bailey were sent to Stamps, Arkansas, to live with their paternal grandmother, Annie Henderson, whom Maya often referred to as “Mother.” 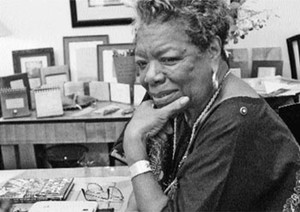 Maya Angelou at an interview in her New York apartment, 29 January 2002.

Mrs. Henderson was a strong, independent black woman who owned a country store, in which Maya lived and worked. Maya was a bright student and an avid reader; she absorbed the contradictory messages of love emanating from the Christian Methodist Episcopal Church and of hatred, revealed in the pervasive mistreatment of blacks by their white neighbors. In 1935 Maya returned to live with her mother in Chicago, until it was discovered that the eight‐year‐old had been raped by her mother's lover, Mr. Freeman, in whose care she was often left. Freeman was murdered, probably by Maya's uncles, after she testified in court. The trauma of the attack, the trial, and the misplaced guilt she felt for the death of the man who had abused her trust caused Maya to withdraw into an almost complete silence. She was sent back to Arkansas, where for the next four years she rarely spoke. By reading literature and poetry to her, Mrs. Bertha Flowers, a local, sophisticated black woman with impressive elocution, helped renew a love of language in a girl many believed to be mute.

At the age of thirteen Maya was at the top of her class when she and Bailey went again to live with their mother, who had by then moved to San Francisco. She attended George Washington High School and studied dance and drama at the California Labor School. She spent a summer with her father, but violent quarrels with his girlfriend compelled Maya to run away, preferring to live in an abandoned van for a month. In 1944 she temporarily dropped out of school and got a job as a streetcar conductor (becoming the first black woman in San Francisco to hold that position). As an adolescent she was almost six feet tall, insecure, desperate for affection, and confused about her sexuality. In this emotional state, she began an intimate relationship with a male acquaintance and became pregnant at the age of sixteen. Yet with indomitable determination she returned to school and graduated one month before giving birth to her only child, Clyde.

Angelou's journey to adulthood became the basis of her first and most celebrated autobiographical novel, I Know Why the Caged Bird Sings (1970), which was nominated for a National Book Award and named from a line in the poem “Sympathy,” by Paul Laurence Dunbar . This book was soon followed by Gather Together in My Name (1974), which continues her odyssey. Angelou takes the reader through her postwar years as a single mother working as a cook at a Creole café in San Diego. She attempted to join the army and tried to retreat to Arkansas, the place of past comfort, only to learn that as an adult her lack of racial deference endangered her and those she loved. In 1947 her early efforts to become an entertainer led her into a world of drug use. During this period she became a madam for two lesbian demimondaines, and an abusive relationship with a man briefly plunged her into a life of prostitution. The narrative ends at the close of the 1940s with Angelou pulling her life together, as the religiously inspired title implies.

In 1950 Angelou began a three‐year marriage to a former Greek sailor, Tosh Angelos (“Angelou” is a variant of his name), recounted in her third autobiographical volume, Singin' and Swingin' and Gettin' Merry Like Christmas (1976). Her singing and dancing career began to show promise when she became a calypso performer at the Purple Onion in San Francisco. This led to bookings in Chicago and ultimately at the Village Vanguard in New York. She moved to New York to study dance with Pearl Primus and in 1954 landed a role in the George Gershwin opera Porgy and Bess, which toured Europe until 1955. When she returned to the United States, her career was progressing, but her failed marriage and frequent separations from her son evoked troubling memories of her own childhood. The book ends on a note of reconciliation and redemption as she sets out with her son on a Hawaiian cruise.

A fourth volume, The Heart of a Woman (1981), begins shortly after her return from Europe, when an old friend brings Billie Holiday to Angelou's small San Francisco apartment for lunch. In this passage Angelou's skills as a writer are particularly evident. She recalls events with astonishing detail and relates them in an authentic and compelling style as her prose shifts between Standard English and the black vernacular she summons when its effect is most appropriate. Her ear for the particular speech patterns of her characters is evident in her re‐creation of Billie Holiday's sassy and salty manner. These lively narrative qualities are sustained as the scene shifts to Brooklyn, where she moved in 1957 to appear in the off‐Broadway play Calypso Heatwave. While in New York she joined the Harlem Writers Guild, whose members included James Baldwin , Paule Marshall , and John Henrik Clarke . This intellectual environment nurtured her literary interests and shaped her political activism. In 1960 she played a leading role in staging Freedom Cabaret, a revue she wrote to raise money to help Martin Luther King Jr . and the civil rights movement.

A few months later Bayard Rustin nominated her to become the northern coordinator for the Southern Christian Leadership Conference. She held this position for a few months, but in May 1961 she was offered the role of White Queen in Jean Genet's Obie Award–winning play The Blacks, which had a cast that included James Earl Jones and Cicely Tyson . However, soon after the production began, she left because of a monetary dispute with the director. Angelou's common‐law husband at the time, the South African freedom fighter Vusumzi Make, did not want his wife to work, insisting that “no wife of an African leader can go on the stage” (Angelou, The Heart of a Woman, 205). Angelou found out that Make could not support the family without her income shortly before their move to Cairo, Egypt, in late 1961, when she discovered that they were being evicted from their Manhattan apartment.

In Cairo, Angelou became disillusioned by the chauvinism of black nationalists and defied her controlling, philandering husband by taking a job as the associate editor of the Arab Observer, an English‐language newspaper. In 1963 she left Make and moved to Accra, Ghana, where she worked for the University of Ghana and became an editor of the African Review and a contributor to the Ghanaian Times and the Ghanaian Broadcasting Company. She arranged the itinerary for her friend Malcolm X during his visit to Ghana, and she enjoyed a close relationship with the family of W.‐E.‐B.‐ Du Bois , who had expatriated from the United States to live in Ghana some years earlier. Angelou returned to the United States in 1966 to continue her career in the theater; however, James Baldwin urged her to pursue her writing. Angelou's penultimate final autobiographical volume, All God's Children Need Traveling Shoes (1986), recounts her sojourn in Africa. Her final autobiography, A Song Flung Up to Heaven (2002), documents the tumultuous events after Angelou returned to America to help Malcolm X and the Organization of African‐American Unity. Angelou describes in vivid detail the period between the assassinations of Malcolm X and Martin Luther King Jr., and brings us to the verge of her literary stardom.

David Levering Lewis has argued that Angelou's work is prominent within a grand tradition of African American autobiography extending from the slave narratives of Frederick Douglass and Harriet Jacobs , through the early modern memoirs of Booker T. Washington and the somewhat fictionalized autobiography of Zora Neale Hurston , to the contemporary Autobiography of Malcolm X. While she incorporates the elements of triumphalism that one typically finds in the slave narratives and some of the determined individualism of the Horatio Alger genre, Angelou mingles Brer Rabbit savvy with resilient love to produce books that reveal harsh realities about race and gender in American life.

And Still I Rise.

Maya Angelou recites the poem "And Still I Rise."

Most of her literary acclaim focuses on her autobiographies but Angelou also published nine volumes of poetry, including Just Give Me a Cool Drink of Water 'fore I Diiie (1971), which was nominated for a Pulitzer Prize, and the noteworthy And Still I Rise (1978), which contains the very popular title poem and the often recited “Phenomenal Woman.” In addition, she received a Tony Award nomination for her role in the Broadway play Look Away in 1973 and an Emmy Award nomination for her performance in Alex Haley 's Roots in 1977. She became the first woman and the only African American to read a poem at a presidential inauguration when President Bill Clinton invited her to read “On the Pulse of Morning” in 1993. Two years later she was one of the few women to speak at Louis Farrakhan 's Million Man March, where—despite her own unhappy relationships—she affirmed her hope for the black family.

When her eight‐year marriage to the British builder Paul Du Fue ended in divorce in 1981, Angelou moved to North Carolina, where she became the Reynolds Professor of American Studies at Wake Forest University. She remained a prolific writer, performer, and speaker well into her eighties.

In the 2008 Democratic presidential primary, Angelou was a prominent supporter of her long time friend, Senator Hillary Clinton (D-NY), but enthusiastically endorsed Clinton’s opponent, Barack Obama (D-NY), once he became the party’s nominee. In 2008 she was honored with the Ford’s Theatre Society Lincoln Medal in 2008. Her cultural output worked with scholar Molefi K. Asante on a film, The Black Candle: A Kwanzaa Celebration, which she narrated and for which she composed several new poems. She has also published Letter to My Daughter, (2009) a poignant volume dedicated to the daughter she never had and a cookbook, Great Food, All Day Long: Cook Splendidly, Eat Smart (2010). Angelou, who in 2010 donated her personal papers to New York’s Schomburg Collection, was the recipient of the nation’s highest civilian award, the Presidential Medal of Freedom, in 2011.

Angelou died at her home in Winston-Salem at the age of 86, about a year after the publication of her final book, Mom & Me & Mom, a best seller which recounted her relationship with her mother. Joining with the numerous public figures who mourned her passing, President Obama described Angelou in a statement as "one of the brightest lights of our time" who inspired generations of artists and activists.