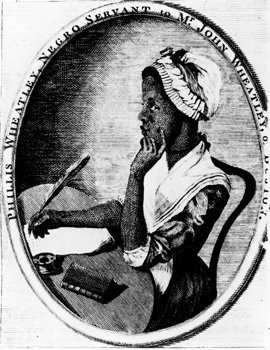 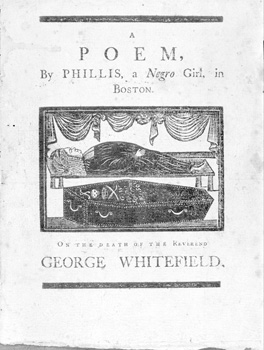 Wheatley's first poem was published in the Newport Mercury in 1767 when she was still in her early teens. The poem above, her most famous elegy, was published three years later, in 1770. 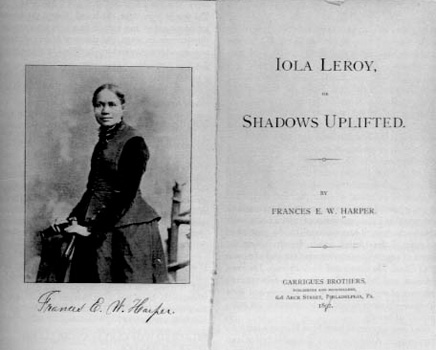 Frances Ellen Watkins Harper was an activist, a journalist, and a prolific novelist, as well as one of the era's best-loved poets. Her first poems were published in antislavery journals in the late 1830s, while she was still a teenager. Her first book, Autumn Leaves (1845), was a selection of poetry and prose. Her first novel, Minnie's Sacrifice (1869), was long thought to be the first published by an African American women. However, in the early 1980s Henry Louis Gates Jr. discovered that Harriet Wilson, the author of Our Nig (1859) was African American, making Wilson the first black woman to publish a novel. More recently, Gates discovered another treasure:A Bondswoman's Narrative written by Hannah Crafts in the 1850s but never published. 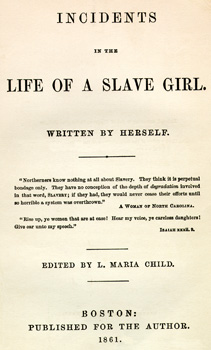 Courtesy of University of North Carolina.

Not many African American women had the opportunities of Frances Ellen Watkins Harper. In the post-Emancipation era the slave narrative, autobiography, and memoir were the main literary forms available to black women of letters. Among the most important is Incidents in the Life of a Slave Girl by Harriet Jacobs. Thought for years to be a novel written by a white woman, its true authorship and autobiographical context was only discovered in the late 1980s by the scholar Jean Fagin Yellin. 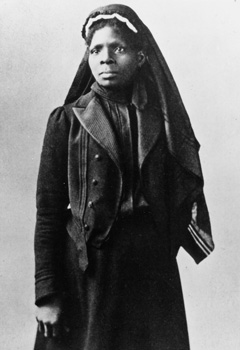 Still autobiographical, but not dealing entirely with slavery is Susie Baker King Taylor's highly accessible memoir, Reminiscences of My Life in Camp with the 33rd United States Colored Troops Late 1st S.C. Volunteers, published by herself in 1902. The only Civil War memoir written by a woman who served in the Union camps, it provides a view of the Civil War not otherwise available. 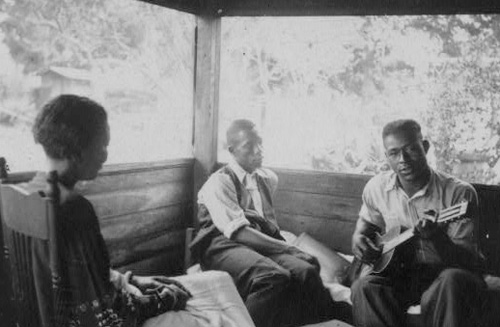 Photograph by Alan Lomax. Courtesy of Library of Congress.

The 1920s and the Harlem Renaissance brought African American literary efforts to an international audience. One of the most important writers of the era was Zora Neale Hurston, an anthropologist as well as novelist. The majority of her work takes place in the southern, rural, black world, like that pictured here, taken while in Belle Glade, Florida, as part of the 1935 Lomax-Hurston-Barnicle recording expedition to Georgia, Florida, and the Bahamas. Hurston, whose most famous work is Their Eyes Were Watching God (1937) is seated on the left with her back to the camera. 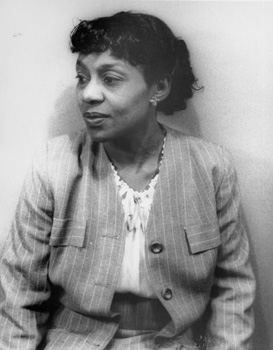 Another important—though oft-neglected—writer who was a member of the Harlem Renaissance was Dorothy West. Known largely as a writer of short stories West finally gained national attention in 1995 with the publication of her second novel, The Wedding. This inspired the re-publication of some of her earlier work in The Richer, the Poorer: Stories, Sketches and Reminiscences (1995). 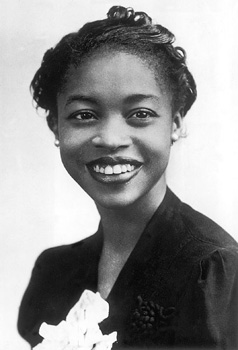 Margaret Walker was a poet and novelist best known for her poem "For My People" (1937) and her novel Jubilee (1966). By 1999, Jubilee had sold over a million copies. Margaret Walker and her contemporary, Gwendolyn Brooks, provided an essential link between the Harlem Renaissance and the modern explosion of African American women's literature. Both were mentors to the next generations of poets and writers. Brooks came to national attention with the publication of her first volume of poetry, A Street in Bronzeville (1945) and in 1950 she became the first black woman to win the Pulitzer Prize, for poetry. 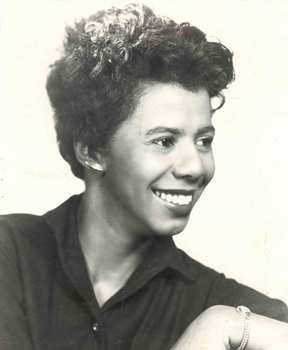 Lorraine Hansberry entered the literary scene in 1959 with the production of her first play, Raisin in the Sun and became an immediate star. Unfortunately her career was a short one—only six years. She died of cancer in early 1965. The 1960s introduced other important black women playwrights including Alice Childress and Adrienne Kennedy. 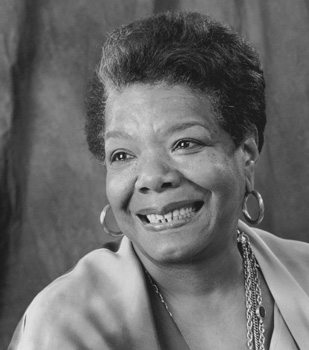 The 1970s brought a new generation of African American women writers to international attention, winning more prizes, selling more books, producing more plays than ever before. In fact, in many ways black women are now leaders of the American literary community. Maya Angelou published her first autobiography, I Know Why the Caged Bird Sings in 1970. Also a prolific poet, in 1993 she wrote and delivered the poem "On the Pulse of Morning" for President William Jefferson Clinton's first inauguration. 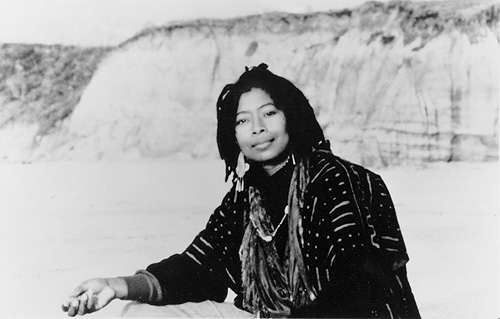 Like Maya Angelou, Alice Walker entered the literary spotlight in 1970, when she published her first novel, Third Life of Grange Copeland. Her acclaim increased in literary circles over the next decade, but it was not until her novel Color Purple was published that she became a household name. 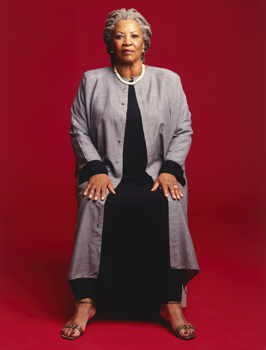 Toni Morrison's first novel, Bluest Eye, also appeared in 1970. Her fifth novel Beloved won the Pulitzer Prize for fiction in 1988. In 1993, she won the Nobel Prize for Literature. For more information on Toni Morrison, see this month's Featured Essay.