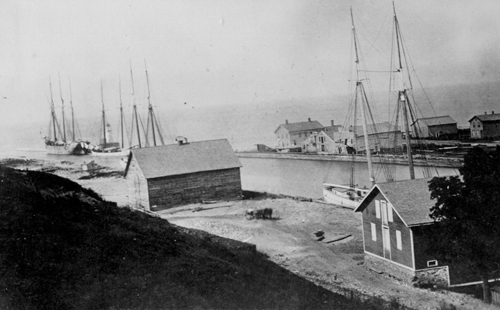 Simultaneously bordering Lake Erie and the slaveholding states of Kentucky and Virginia (West Virginia did not exist until secession in 1861), Ohio held a prominent role in slave escapes. Towns such as Ashtabula, Ohio, located on the southern shore of the lake and often populated by free blacks and Quakers, were hubs of antislavery activism and often the "last stop" on a runaway slave's journey to Canada. Perhaps the most famous escape in American literature—that of Uncle Tom's Cabin protagonist Eliza Harris—involved the free state of Ohio. After a perilous crossing of the Ohio River from Kentucky, Eliza travels across Ohio to arrive in Ontario. In the above photo of Ashtabula Harbor, the wooden shack served as a hideout for slaves awaiting passage across the lake. 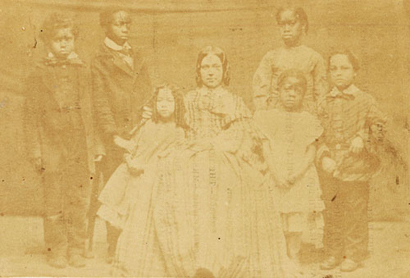 The photo above, dating from the late 1850s, shows a teacher from the Mission to the Fugitive Slaves in Canada alongside her students. Under the supervision of the Colonial and Continental Church Society, an Anglican organization founded in 1823, the Mission educated children of escaped American slaves settled in southwestern Ontario. The photo was contained in a report sent to church headquarters in England in 1859. The instructor, "Mistress Williams," provides a detailed description of each child a third of the way into the sixty-four-page report; included are the harrowing details of each child's arrival to Canada. Lizzie L., the girl to the left of Williams, escaped with her family from Maryland by "walking by night" and "hiding in the bush by day." Going through Pittsburgh and Detroit, it took three weeks to reach Ontario. 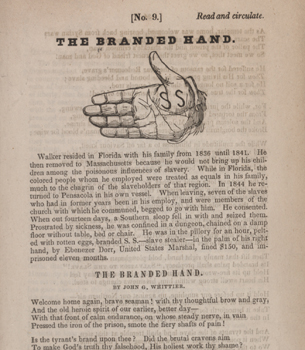 Whereas abettors of fugitive slaves in the North might have faced fines or short imprisonment, collaborators caught in the South could be subjected to brutal retribution. (That is if they were white; the punishment for black accomplices was often death.) In one well-documented case from 1844, white Massachusetts captain Jonathan Walker was overtaken at sea while attempting to transport seven slaves from Florida to the Bahamas, where, per act of the British Parliament, slavery had been abolished ten years earlier. Walker was first imprisoned in Key West, then taken to Pensacola to stand trial, where he was convicted, jailed, and pilloried. Additionally, his right hand was branded with the initials SS for "slave stealer." Fellow abolitionists helped secure his release after eleven months, and Walker's tribulations became a rallying cry for the antislavery movement. Poet John G. Whittier's ode "The Branded Hand" helped disseminate Walker's story, and in 1846 Walker published The Trial and Imprisonment of Jonathan Walker through the Boston Anti-Slavery Office. 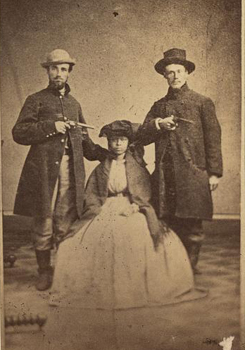 In the fall of 1862, two soldiers from Wisconsin's 22nd Infantry Regiment escorted an escaped teenage slave from Nicholasville, Kentucky, to the home of famed Underground Railroad operator Levi Coffin in Cincinnati. The regiment, composed of numerous sympathizers to the abolitionist cause, had been stationed in Nicholasville to fend off a rumored attack from Confederate General Edmund Kirby Smith. The soldiers were Frank M. Rockwell (left), a twenty-two-year-old postmaster from the town of Geneva, and Jesse L. Berch, a twenty-five-year-old quartermaster sergeant from Racine. With the young fugitive disguised as a "mulatto soldier boy," Rockwell and Berch traveled the one hundred miles to Coffin's house at a rapid pace. The party arrived safely and spent two days at the Coffin residence. Before sending the girl off to Racine (where the soldiers had friends ready to take the girl in), however, they posed with her for the above daguerreotype, taken at the J. P. Ball Photographic Gallery in Cincinnati. 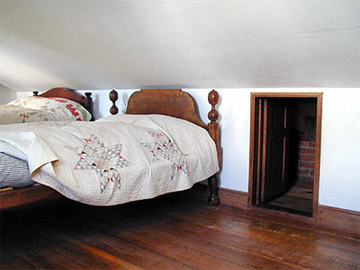 Mythologized as the "president" of the Underground Railroad, Levi Coffin—alongside Philadelphian Isaac Hopper—was one of the most prominent Quakers working to abet the escape of fugitive slaves. Coffin and his wife, Catharine, are believed to have sheltered at least two thousand slaves at their various homes in Newport (now Fountain City), Indiana, and the Coffins' residence, an eight-bedroom brick house, is now a National Historic Landmark. Shown is a picture of an upstairs hiding spot for runaways staying at the Coffin residence. A lifelong antislavery activist, Coffin moved to Cincinnati in 1847 to open a "free goods" store, so-named because of the store's policy of only selling goods produced by free labor. So renowned was the Coffin family's connection to the Underground Railroad they were memorialized in Uncle Tom's Cabin as Simeon and Rachel Halliday, the kindly white couple who hide protagonist Eliza Harris and her child in their home. 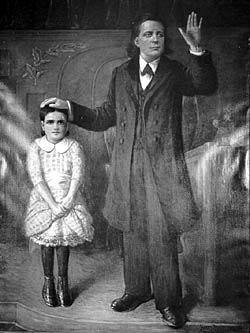 The spiritual home of the Underground Railroad, Brooklyn's Plymouth Church of the Pilgrims was ministered at its 1847 founding by flamboyant nineteenth-century abolitionist Henry Ward Beecher—brother of Uncle Tom's Cabin author Harriet Beecher Stowe—and played host to prominent antislavery activists William Lloyd Garrison, Charles Sumner, Wendell Phillips, and John Greenleaf Whittier. Although the church is believed to have hidden fugitive slaves on their way north, it was most well-known for its dramatic "legal" emancipations: With Beecher taking on the role of auctioneer, congregants would bid to purchase the freedom of slaves from their owners (a practice, it should be noted, laden with controversy, as it was seen by detractors as supporting the institution). The most famous auction involved Sally Maria Diggs, a nine-year-old girl known as "Pinky," for whom $900 was raised by Plymouth members in 1860. Her freedom secured, Diggs went on to live in Washington, D.C., graduating from Howard University and marrying lawyer James Hunt. In 1927 she returned to Plymouth, which is still active, to commemorate the eightieth anniversary of Beecher's inaugural sermon. 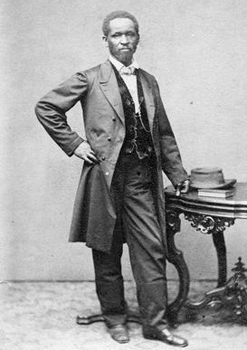 A slave brought to freedom by the Underground Railroad, Lewis Hayden would go on to become one of the antislavery movement's most militant activists. In 1844 Hayden escaped Lexington, Kentucky, with the help of abolitionist minister Calvin Fairbanks—an associate of Levi Coffin—who smuggled Hayden to Ohio before sending him to Ontario. Hayden settled in Boston two years later and became a successful clothing retailer; by 1855, he was considered one of the richest African Americans in the city. After his arrival he immediately took up the abolitionist cause, serving on the executive board of the Boston Vigilance Committee and frequently hiding groups of fugitive slaves in his Beacon Hill home. Nevertheless, his most well-known efforts concern his open opposition to the Fugitive Slave Act of 1850. In the case of Shadrach Minkins, Hayden, along with a group of like-minded residents, forcibly removed Minkins from the courtroom where he was to stand trial for leaving his Norfolk owners. Within six days Minkins arrived in Montreal; Hayden was arrested but not convicted for his role in the escape. In another instance, Hayden threatened to detonate gunpowder kegs stored in his basement if slave catchers entered to apprehend runaways William and Ellen Craft. 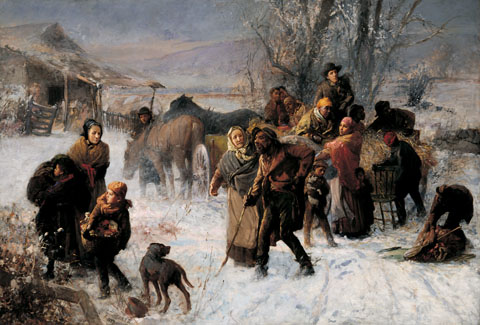 Even though Ohio artist Charles T. Webber typically has not been associated with the abolitionist movement, his painting The Underground Railroad has been retroactively lionized as a grand commemoration of the enterprise. Webber created the painting for the World's Columbian Exposition (the Chicago World's Fair) in 1893; presumably Webber supported the work of his friends Levi and Catharine Coffin—the couple's Cincinnati farmstead is believed to be depicted in The Underground Railroad—but his previous works did not broach such loaded themes. The painting, a dramatic portrayal of escaped slaves braving exhaustion and snow, helped add to the mythology of the Underground Railroad that would, rightly or wrongly, come to define it in future years. So celebrated was The Underground Railroad that even though Webber's career included being Cincinnati's senior artist-in-residence and multiple exhibitions in Paris, Webber is known most for this painting. 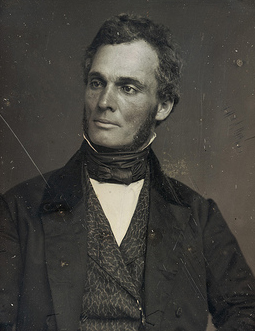 Courtesy of the Boston Public Library

The wealthy heir of a British cotton broker and a mixed-race mother of North African and German Jewish descent, Robert Purvis (1810–1898) was a fascinating product of nineteenth-century America. Purvis, who was light in skin tone, might have easily lived as a wealthy upper-class Philadelphian. However, beginning in the 1830s he founded and financed various abolitionist groups such as the American Anti-Slavery Society and the Pennsylvania Abolition Society, dedicating his professional and personal life to advancing black interests. In 1839 Purvis served as president of the Vigilant Committee, which, according to an 1883 account coedited by him, History of the Underground Railroad in Chester and the Neighboring Counties of Pennsylvania, represented the "first organized society of the Underground Railroad." Purvis became increasingly radicalized, and after the passage of the Fugitive Slave Act of 1850 openly supported armed resistance to the law. In addition, he reportedly hid escaping slaves on his farm, located just outside of Philadelphia. After the Civil War, Purvis continued his involvement in politics and philanthropy until his death in 1898. 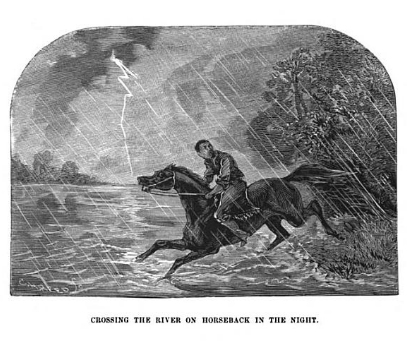 Crossing the River on Horseback in the Night is contained in William Still's The Underground Railroad, the venerable anthology of fugitive slave escapes. The free-born child of former slaves, Still was an active member of various Philadelphia abolitionist and civil rights groups when he published The Underground Railroad in 1872. Various accounts of assisting escaping slaves had already been published, but Still's book represented the first definitive account of "vigilance committees," so-called for their extrajudicial defiance of fugitive slave laws. Additionally, the stories and statistics included in The Underground Railroad were in large part gleaned from Still's own work with hundreds (if not more) of runaway slaves he had assisted in Philadelphia. Crossing the River on Horseback in the Night accompanied one such story, that of Robert Brown, who escaped from Martinsburg, Virginia, by crossing the Potomac River with his horse during a raging Christmas night storm. Brown was forced to abandon his horse and walked, freezing, to Harrisburg, eventually making it safely to Philadelphia on New Year's Eve 1857.