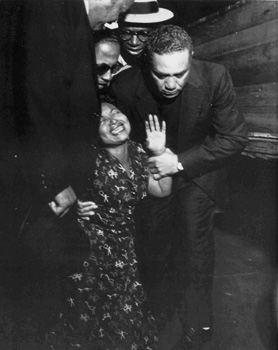 Photo by William Lanier. Visual Materials from the National Association for the Advancement of Colored People Records, Library of Congress, LC-USZ62-118182.

In 1955, fourteen-year-old Emmett Till traveled from Chicago to Mississippi to visit relatives. While there he was abducted, tortured, and murdered for allegedly whistling at a white woman. At his funeral, his mother Mamie Bradley insisted that his coffin remain open so that all could see the violence done to her child. Jet Magazine published pictures of Till's mutilated corpse, and Bradley traveled the country speaking about what had been done to her son. Outrage over the event was an enormous impetus for the modern Civil Rights Movement. In this photo, Mamie Bradley collapses as Till's casket arrives in Chicago 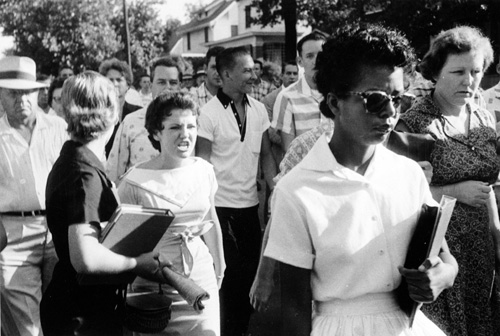 In 1957 Daisy Bates and the Little Rock, Arkansas National Association for the Advancement of Colored People (NAACP) decided to test the Supreme Court's historic 1954 ruling on Brown v. Board of Education, which banned segregation in the schools. When the students, who became known as the Little Rock Nine, tried to enter Central High School, Governor Orval Faubus ordered the Arkansas National Guard to prevent them from entering the building. After a stalemate that lasted almost two weeks President Eisenhower ordered Faubus to use the National Guard to protect the students instead. Faubus refused to comply and Eisenhower sent in paratroopers from the 101st Airborne Division. Eight of the students completed the year, enduring constant threats and abuse. In this photo fifteen-year-old Elizabeth Eckford, who had a heart condition, braves an angry mob while trying to enter the school. That day the other African American students had been told that they should not attempt go to school, but Eckford's family did not have a phone. The woman with dark hair who is screaming at Eckford is Hazel Bryan, (now Massery). Not wanting to be "the poster child for the hate generation," Massery apologized to Eckford in 1963. Today, they travel and speak together about the events of that day. 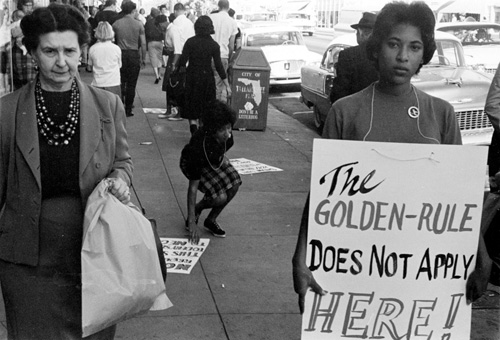 Courtesy of the Florida State Archives.

While there had been a few sit-ins prior to 1960, the sit-in movement became part of the national strategy of civil rights groups after four freshmen at North Carolina A&T University staged a sit-in that year in Greensboro, North Carolina. Within months, sit-ins, pickets, and boycotts of segregated stores and lunch counters had spread throughout the country. The young woman pictured here is picketing segregated lunch counters at Neisner's McCrory's, F.W. Woolworth's, Walgreen's and Sears stores in Tallahassee, Florida. 6#x20147 December 1960. 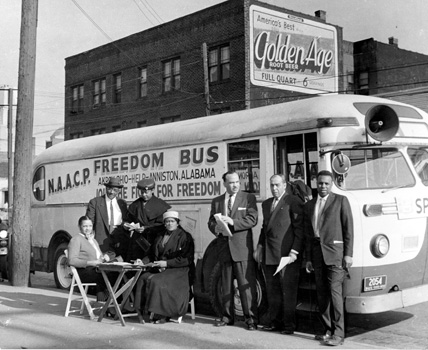 Courtesy of the Florida State Archives.

Organized by the Congress of Racial Equality (CORE) in May 1961, two buses with black and white passengers set out on a "Freedom Ride" to challenge segregation in interstate travel and travel facilities in the South. Riders were attacked first in Anniston, Alabama, and later in Birmingham. Photos of the violence were seen all over the world. When CORE wanted to end the Freedom Ride, John Lewis and members of the Nashville Student Non-Violent Coordinating Committee (SNCC) decided to continue. They were attacked again in Montgomery, Alabama. In response to the violence, civil rights organizations from all over the country began staging their own Freedom Rides. While this photograph is attributed to the 1950s, it is more likely a record of a later Freedom Ride. As a result of the Freedom Rides of 1961, President John F. Kennedy was forced (for the first time) to get involved in the Civil Rights Movement. In November of that year, the Interstate Commerce Commission prohibited segregated transportation facilities. 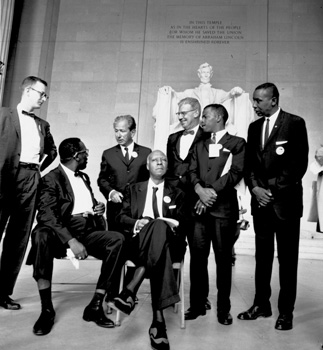 Courtesy of the National Archives and Records Administration.

The 1963 March on Washington was a watershed event for the modern Civil Rights Movement with over 250,000 in attendance. Hollywood celebrities such as Harry Belafonte, Marlon Brando, Lena Horne, and Charlton Heston were also there to hear Martin Luther King challenge the world with his "I Have a Dream" speech. Pictured here are some of the organizers of the March. From right to left: Mathew Ahmann, Cleveland Robinson, A. Philip Randolph, Joseph Rauh Jr., John Lewis, and Floyd McKissick. 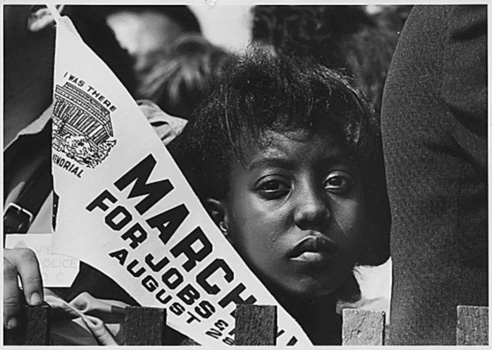 Courtesy of the National Archives and Records Administration.

A girl at the March on Washington, 28 August 1963. Many of the participants in the Civil Rights Movement were children and teenagers. In fact, it was the use of force against these young people that helped gain international support for the movement. 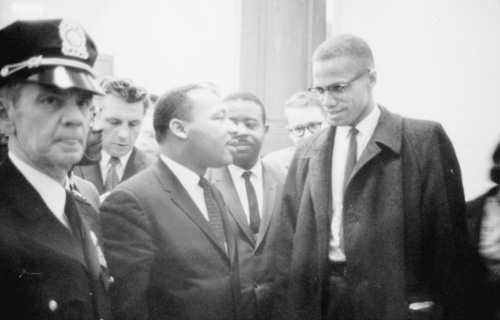 Photo by Marion S. Trikosko. Courtesy of the Library of Congress.

This image shows the only time Martin Luther King and Malcolm X ever met, and was taken before a press conference at the U.S. Capitol on 26 March 1964. For years, the two had represented opposite sides of the struggle: King was a leader of the southern Civil Rights Movement, while Malcolm X was recognized as a voice for urban African Americans; however, by 1964 they were moving closer. Tragically, Malcolm X was assassinated by members of the Nation of Islam at the Audubon Ballroom in Harlem on 21 February 1965. King was assassinated three years later by James Earl Ray at the Lorraine Motel in Memphis Tennessee on 4 April 1968. 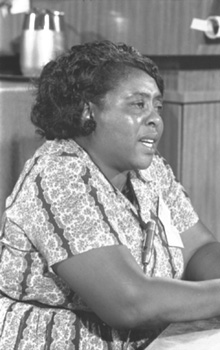 Photo by Warren K. Leffler. Courtesy of the Library of Congress.

In 1964 the Mississippi Freedom Democratic Party (MFDP) was organized in order to create an alternative delegation of black Mississippians to attend the 1964 Democratic National Convention in Atlantic City, New Jersey. Blacks in Mississippi were disfranchised and faced considerable violence if they attempted to register to vote. In order to protest these conditions the MFDP attended the Democratic Convention and demanded their place at the political table. Pictured here is Fannie Lou Hamer, an MFDP delegate, at a 22 August press conference. While the MFDP did not win its battle, the embarrassment they caused was instrumental in getting the 1965 Voting Rights Act passed. 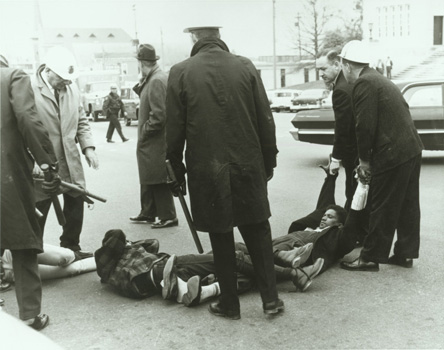 Courtesy of the Alabama Department of Archives and History, Montgomery, Alabama.

In 1965 the leaders of the Southern Christian Leadership Conference (SCLC) began a massive voter registration mobilization in Selma, Alabama. On 7 March six hundred marchers set out from Selma to the state capitol of Montgomery to demand their voting rights. At the Edmund Pettus Bridge outside of Selma, the marchers were attacked by highway patrolmen and state troopers. Images of the attack were broadcast across the country. The following week Martin Luther King led a group of 1500 protesters, but they turned back when again faced by armed police. Later that day a white minister, James Reeb, was attacked and killed in Selma. The death of Reeb led President Lyndon B. Johnson to federalize the Alabama National Guard and bring in regular Army troops to protect the marchers. On 21 March four thousand people set out from Selma to march to Montgomery. When the group arrived at the capitol there were 22,000 marchers. Five months later, on 6 August, President Johnson signed the Voting Rights Act into law. In this image, marchers are arrested by the Montgomery police. 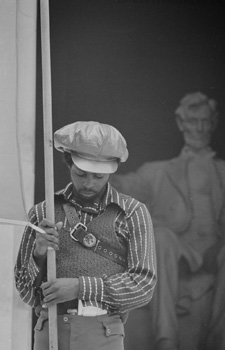 Photo by Warren K. Leffler. Courtesy of the Library of Congress.

By the 1970s the nonviolent southern-led Civil Rights Movement had been superseded by the more militant Black Power Movement which was influenced by the experiences of young African Americans from the urban inner cities. In this image taken on 19 June 1970 a man at the Black Panther Convention stands on the steps of the Lincoln Memorial holding a banner for the Revolutionary People's Constitutional Convention.