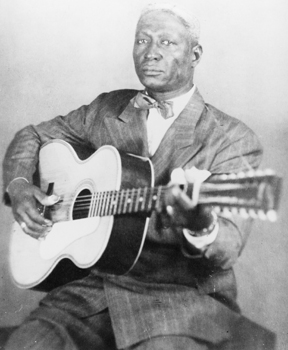 What exactly is "the blues"? More than a century and thousands of volumes of literature after its advent, agreement still remains elusive. Son House, the legendary Mississippi Delta guitarist, claimed "the blues ain't nothing but a low-down, aching chill," while blues queen Ida Cox insisted it was "nothin' but a good woman feelin' bad." In his landmark 1976 tract Stomping the Blues, scholar Albert Murray opted to dissect the age-old inquiry, differentiating between the "blues as such"—heartbreak, loneliness, poverty—from "blues music," which produced "irrepressible joyousness," "downright exhilaration," and "rapturous delight in sheer physical existence" (Murray). Even limiting a definition to technical characteristics is tricky: while the classic 12-bar blues pattern marks much of the output of famous guitarists such as Blind Lemon Jefferson and Charlie Patton, it does the same for songs by Ray Charles and Jimi Hendrix, musicians intimately influenced by but not defined as bluesmen. In the end, it may be most expedient to identify the blues in terms considered least objectionable: a secular African American folk music whose relevance lasted roughly from the end of the nineteenth century through the middle of the twentieth century. 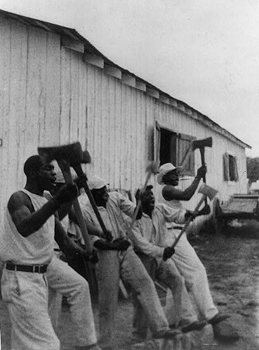 "Lightnin'" Washington, an African American prisoner, singing with his group in the woodyard at Darrington State Farm, Texas (1934). Courtesy of the Library of Congress.

Just as difficult as defining the blues is determining where, exactly, it came from. While scholars acknowledge that the genre has drawn on numerous and disparate sources, there remains to this day no agreed-upon consensus on the importance of each. Breezy attributions to "Africa," while not incorrect, have often been overly simplistic; while it was within the communities of the descendants of African slaves that blues was created, it was not until multiple generations after the abolishment of the slave trade that the blues even emerged. Certain traits of the blues, however, can be directly traced to West Africa, including the banjo—a North American adaptation of African stringed instruments such as the khalam—and the field holler, a term for work songs used by slaves to communicate with one another. A version of "ring shouts"—a collective song and dance ritual from Africa—field hollers incorporated a rhythmically disciplined call-and-response to "keep laborers moving in unison" and maintain contact with other slaves (Wald), a vestige that would come to be one of the defining features of the blues. 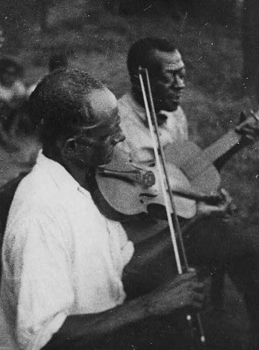 Stavin' Chain playing guitar and singing the ballad "Batson" accompanied by a musician on violin, Lafayette, Louisiana (1934). Courtesy of the Library of Congress.

In addition to the developing synthesis between black folksong and European-American narrative patterns found in minstrel songs, another trend marked a watershed moment in the development of the blues. The rise of mail order companies such as Sears, Roebuck and Co. made guitars inexpensive and readily available, and the dry-sounding, staccato yelp of the banjo was quickly traded for the "vocal-like" and sustained whine of the six-stringed guitar, an instrument whose "new techniques were more in keeping with the new century" (Oliver). A variety of instruments, including fiddles, horns—and, more simply, jugs, saws, and washboards—remained in common use, but the emergence of the guitar set the stage for the genre's signature sound, that of the lonesome songster as portrayed by the likes of "Blind" Blake and Robert Johnson. 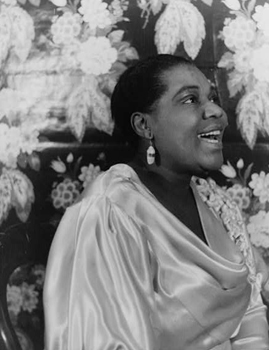 "The last crucial element in the development of the blues," according to The Oxford Encyclopedia of Popular Music, "was the advent of the phonograph." Indeed, music historians have generally credited W. C. Handy's 1912 recording of "Memphis Blues" and Mamie Smith's "Crazy Blues" (1920) with solidifying the genre as commercially viable, an advance that would help launch the music from provincial craft to national entertainment staple. Accounts of Handy and Smith's first exposure to the blues are somewhat apocryphal, adding even more intrigue to a genre already saturated in mythology. Sources claim that Handy, on tour in Mississippi in 1903, crossed paths with a tattered black man playing guitar with a knife and moaning in repeated verse. "It was the weirdest music I had ever heard," Handy is reported to have said. Regardless of its beginnings, the newly-recorded sound was a success, and Smith's record sold "more than a million copies in six months" (Hodges), immediately clearing the way for the "race record" genre that would launch the careers of Bessie Smith, Ma Rainey, Ida Cox, Ethel Waters, and other so-called blues queens.

Hodges, Graham Russell Gao. "Blues." In Encyclopedia of African American History, 1896 to the Present: From the Age of Segregation to the Twenty-first Century, edited by Paul Finkelman. New York: Oxford University Press, 2008. 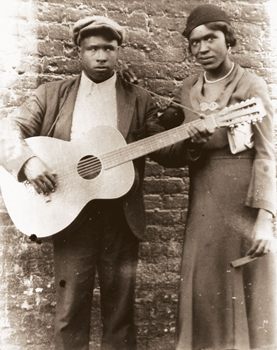 At the same time Mamie Smith and Ma Rainey were making recording history, other blues styles were emerging from different regions of the United States. Three areas in particular came to be associated with a specific sound: the Piedmont, the Mississippi Delta, and Texas. Important differences existed between the three styles—collectively referred to as "country" to distinguish them from the more modern burlesques of the blues queens—but so did many similarities, chief among them a pervasively plaintive, stripped-down feel. The 1920s country style, exemplified by musicians such as Son House (Mississippi Delta), Leadbelly (Texas), and Blind Willie McTell (Piedmont), has in many ways remained the quintessential blues archetype. It was also through these guitarists that the AAB (or "12-bar") style, now so intimately associated with the genre, began to take shape. Still, as music historian Elijah Wald notes, women singers backed by jazz ensembles remained much more relevant at this point, frequently selling out major performances, a feat never matched by country bluesmen. 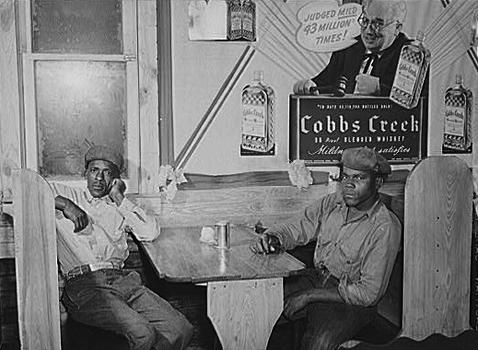 Juke joint and bar in the Belle Glade area, vegetable section of south central Florida. Courtesy of the Library of Congress.

Despite their "country" aesthetic, professional blues musicians of the 1920s and 1930s made their careers in cities, where juke joints, rent party gigs, and, most importantly, recording studios were found. Accordingly, successful musicians had to be more sophisticated than their "simple" music might imply. The melancholic blues wail, so romanticized by succeeding generations of fans and scholars, was undoubtedly authentic—but perhaps much more deliberate than the genre's boosters might be comfortable acknowledging. One particular blues substyle known as "hokum" alluded to this: Fast-paced and characterized by double entendre, the hokum repertoire included songs such as "It's Tight Like That" (Tampa Red), "Let Me Squeeze Your Lemon" (Blind Boy Fuller), and "Me and My Chauffeur" (Memphis Minnie). All were catchy, popular tunes, unquestionably crafted by musicians and songwriters who took commercial considerations seriously. Similar good-time styles that emerged around the same time, such as barrelhouse and boogie-woogie, received considerable play in white bars, suggesting, again, that blues players were keenly aware of market considerations. 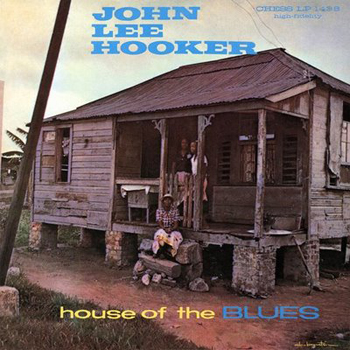 Album cover for John Lee Hooker's House of the Blues (1960).

In 1940 the Second Great Migration had begun, eventually relocating around 1.5 million African Americans from the south by the end of the decade. For the blues, the consequences were momentous. Cities such as Kansas City, Chicago, and Oakland, centers for jazz and swing, introduced arriving musicians to new, innovative styles including large-scale orchestral arrangements and (with the exception of those from Louisiana) brass-heavy jazz ensembles. Most importantly, it was in these cities where amplification was taking off. The outbreak of World War II brought better employment opportunities and, consequently, a more discerning and demanding black music consumer base. Thus, the conditions were ripe for the breakout of southern-born electric guitar virtuosos such as Aaron "T-Bone" Walker and Charles Brown (from Texas) and Muddy Waters and John Lee Hooker (from the Mississippi Delta). Stylistic differences, however, still remained among the now-electrified musicians: for example, Hooker retained much of his original "country" manner, while Walker created an entirely new sound, "expanding [his guitar's] tonal capacities so that it could phrase lines like a saxophone" (Morthland). 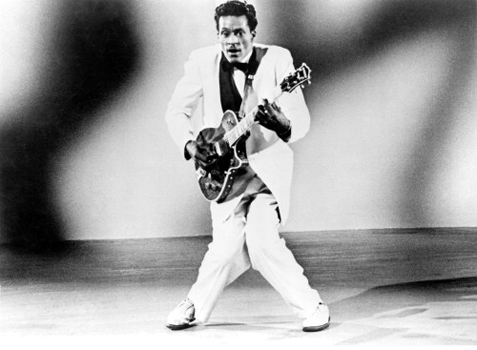 Chuck Berry (1957). Courtesy of the Library of Congress.

Its utter mutability and willingness to fuse with new styles allowed the blues to survive as long as it had, but the simultaneous pulls of rock 'n' roll and rhythm and blues ultimately proved too disruptive. The first significant break occurred in 1955, after Chuck Berry released "Maybellene" on Chess Records. Berry—whose idol was Muddy Waters—incorporated several classic blues traits in the song, including call-and-response and 12-bar style, but its hurried drumbeat and "ripping guitar solo" (O'Brien) made it clear that Berry was on to something far beyond the scope of his idol. With the blessing of influential DJ Alan Freed, "Maybellene" was marketed under the banner of "rock 'n' roll." Somewhat freed of the overt racial associations implied by blues recordings, Berry, with the aid of Freed—who, it would later be revealed, accepted bribes from Chess in exchange for his activism—became a smashing success on mainstream (white) radio, and "Maybellene" became the first rock 'n' roll song to make the Billboard Top Ten. Soon after rock 'n' roll came rhythm and blues, a term intended to "distinguish up-tempo music recorded exclusively by black artists from rock music recorded by whites" (Wynne). The founding of Motown, the country's most successful music factory and at one point the most valuable black-owned corporation in the country, cemented the popularity of rhythm and blues—and helped render the blues even more irrelevant.

O'Brien, Timothy J. "Berry, Chuck." In Encyclopedia of African American History, 1896 to the Present: From the Age of Segregation to the Twenty-first Century, edited by Paul Finkelman. New York: Oxford University Press, 2008. 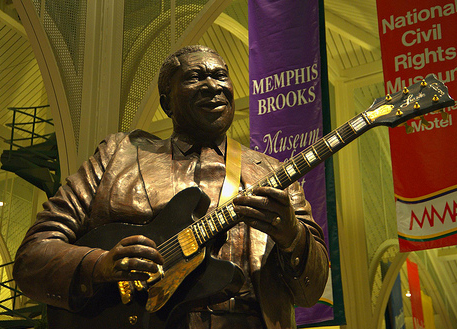 Statue of B.B. King in Memphis. Courtesy of Carl Wycoff.

Aptly summing up modern America's relationship with the blues, Graham Russell Gao Hodges writes in The Encyclopedia of African American History that, "Paradoxically, in the early twenty-first century, blues enthusiasts are largely white and middle class, whereas African Americans generally eschew the form in favor of such descendants as rhythm and blues and rap." A victim of its own success, the blues simply never recovered from its displacement at the hands of rock 'n' roll, rhythm and blues, and their countless successors (which include soul, disco, and electronic music, to name a few). The 1960s and 1970s saw a modest rekindling of interest in the genre as "forgotten" bluesmen were invited to various folk festivals, but present opportunities to "experience" the blues seem to almost always involve attractions like the Mississippi Blues Trail (a state-funded tourist initiative), pilgrimages to cities such as Chicago and New Orleans, or performances by "living legends." The blues, in short, has become a cultural artifact—albeit one with astonishing and unrivaled influence on Western popular culture.

Hodges, Graham Russell Gao. "Blues." In Encyclopedia of African American History, 1896 to the Present: From the Age of Segregation to the Twenty-first Century, edited by Paul Finkelman. New York: Oxford University Press, 2008.