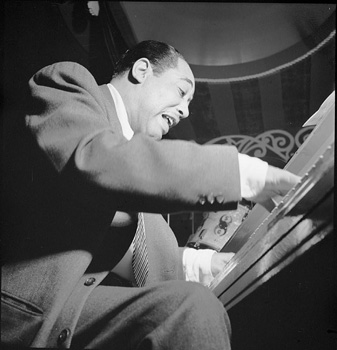 Edward "Duke" Ellington's confident, aristocratic bearing may very well have been justified, since he was one of the most popular and important jazz composers of the twentieth century. Drawn to the piano at an early age, Ellington became increasingly interested in composition while on tour with his first band in the 1920s. His tendency to break musical rules and work collaboratively with his fellow musicians led to Ellington's reputation as a major American composer. It also landed his band a long-term contract with New York's Cotton Club, where he made songs like "Mood Indigo" and "Sophisticated Lady" into jazz standards. Subsequent recordings with Columbia and Victor led to the hits "Take the A Train" and "Cotton Tail," both of which became signature numbers. Although not as uniquely innovative as some other jazz musicians, Ellington created a large body of work that includes many classics of modern American music. This photograph was taken around 1946. 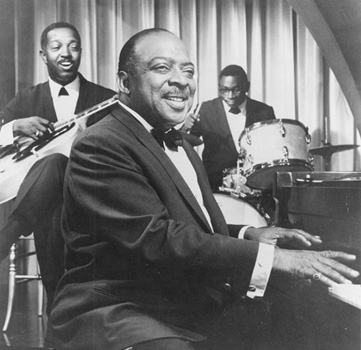 Like Duke Ellington, Count Basie was a successful piano player and bandleader who became an icon of big-band style and popular jazz music. At first torn between a stage and a musical career, Basie devoted himself completely to music after being exposed to the Kansas City blues style that flourished during Prohibition in the 1920s. Blending the Kansas City influence with his experience playing stride piano in Harlem, Basie formed a successful big band that drew national attention through radio broadcasts. Basie went on to lead his band for nearly fifty years, continuing to play swing and big-band jazz at a time when many other groups were disbanding due to shifting musical tastes. Basie's willingness to integrate his band into mainstream American music led to collaborations with such popular icons as Frank Sinatra and Tony Bennett, and to thirty European tours.

William P. Gottlieb, from the Library of Congress Collection

Rising from a difficult and often traumatic childhood in working-class Baltimore, Billie Holiday went on to become one of the most influential jazz singers of all time, and arguably the greatest. Discovered at age eighteen, Holiday's unique sound, innovative timing, and deeply emotional performances made her a powerful and creative force in jazz. Nicknamed "Lady Day" by her friend the alto saxophone player Lester Young while singing with the Count Basie Orchestra, Holiday ultimately became most famous not for her work with big bands, but for smaller lounge acts that allowed her to showcase the subtle tones of her voice and her preference for slow tempos. Haunted throughout her life by drug addiction and the racism encountered both while touring in the Jim Crow South and when performing with white bands in New York, Holiday used her music as an outlet for her own suffering and as a means for protest. Her song "Strange Fruit," a protest against the lynching rampant in the South throughout her lifetime, became a signature piece she performed in almost every performance. This photograph was taken by William P. Gottlieb in 1947, one year before Holiday performed for a sold-out audience at Carnegie Hall in New York. 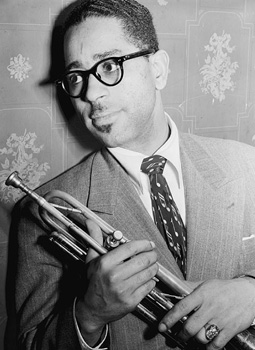 True to his nickname, Dizzy Gillespie's professional and personal life was characterized by high energy and whirlwind speed. Influenced both by Louis Armstrong and by Afro-Cuban dance rhythms, Dizzy took trumpet playing to a new level by embracing fast-moving melodies and highly complex chord progressions. Gillespie was heavily involved in the evolution of bebop and collaborated with innovators such as Charlie Parker and Theolonious Monk. He also maintained a lifetime interest in big bands and led them on a number of occasions. Flamboyant and comedic, he became famous for playing with a bent horn and dramatically puffed-out cheeks. Gillespie's tireless energy won him a number of honors, including the National Medal of Arts, the Kennedy Center Honor, an appointment as a French Commendaur des Artes et Lettres, and a duo performance with President Jimmy Carter on "Salt Peanuts" at the White House Jazz Festival in 1978. 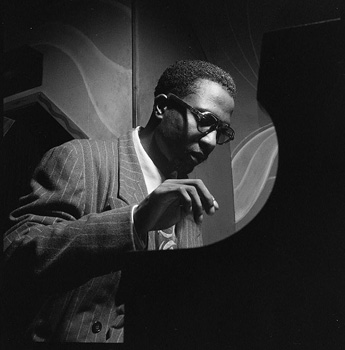 Another one of the founders of bebop, Thelonious Monk's unique approach to music had a powerful impact on the development of modern jazz. Like many of his contemporaries, he was influenced by the Harlem stride style of piano playing, but Monk went on to develop a highly unique style that encompassed unexpected rhythmic pauses and starts, an intentional use of dissonance, and brilliantly improvised chord changes. A nonconformist both musically and personally, Monk was not as well known as other bebop pioneers such as Miles Davis and Charlie Parker, but in later years Monk gained popularity and eventually became the third jazz musician to be featured on the cover of Time magazine in 1964. 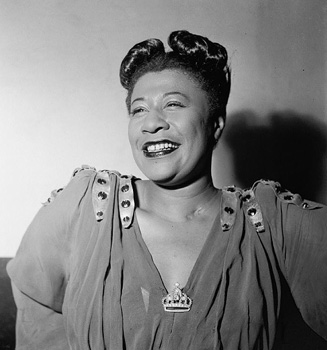 Ella Fitzgerald, the "First Lady of Jazz," was perhaps the most popular and technically skilled vocalist in the history of jazz. Like Sarah Vaughan after her, Fitzgerald's career began when she won amateur night at the Apollo Theater in 1934, a victory she repeated at the Harlem Opera House amateur night three months later. From this beginning she went on to enjoy a long and incredibly productive career. Fitzgerald's smooth voice and flawless timing helped her remain wildly popular with audiences throughout the changing musical tastes of the 1960s and 1970s. Her openness to new types of music and appearances on over two hundred television programs heightened her appeal, as did her collaborations with all the great names of jazz, including Louis Armstrong, Count Basie, Duke Ellington, Dizzy Gillespie, and many others. A tireless performer who could skillfully execute everything from slow ballads to furious scat improvisations, she is one of the best-selling jazz performers in history. Among her many honors, Ella Fitzgerald won thirteen Grammy awards over the course of her career. 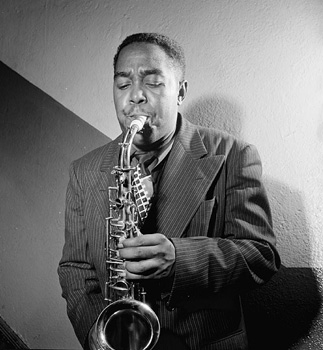 Growing up in Kansas City at the height of its musical fermentation, it is not surprising that Charlie "Bird" Parker became one of jazz's most influential figures. Although Parker was plagued by drug problems and personal demons throughout his life, his genius both as an alto saxophonist and as a composer redefined modern jazz and give birth to the new style of bebop. Parker could memorize an arrangement after a single reading, but nevertheless developed a playing style that revolved around long improvised solos, off-beat accents, and highly complicated melodies. Many of his compositions were unique reworkings of older songs such as "I've Got Rhythm" or "How High the Moon" that proved so popular they became jazz standards in their own right. Parker's genius made him a giant among jazz musicians, many of whom saw him as an idol. His influence was so great that 1949 saw the opening of the famous club Birdland in his honor. Although Parker died only six years later, at age thirty five, he remains one of the towering icons of modern jazz. 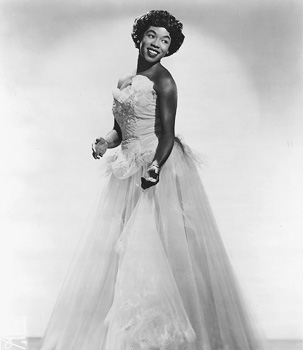 Like Ella Fitzgerald before her, Sarah Vaughan's singing career began when she won a singing contest at New York's Apollo Theater in 1942, after entering on a dare from a friend. Her impressive range and ability to dramatically modulate her voice drew the attention of the bandleader Billy Eckstine, who introduced Vaughan to jazz and to musicians such as Dizzy Gillespie and Charlie Parker. Vaughan's beautiful vocals drew well-deserved praise, though at several points in her career she was criticized by jazz purists who resented the fact that she also recorded mainstream pop music. In time Vaughan moved away from pop music, which she had never truly enjoyed, and devoted her life to touring. Her slow, emotional performance of "Send in the Clowns," recorded with the Count Basie Orchestra in 1982, drew universal acclaim, and Vaughan was awarded a Grammy Award for Lifetime Achievement in 1989. 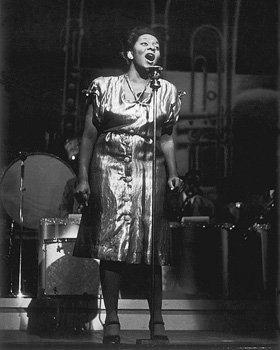 Dinah Washington's musical education began with the gospel music she sang in her local church choir, where her mother was a pianist. Looking to make a name for herself and to escape the poverty of her youth, she turned to popular music and quickly found success thanks to her exceptional voice. Washington began her career as a popular rhythm and blues singer, and received widespread acclaim when her single "What a Difference a Day Makes" crossed over to top the popular music charts and won her a Grammy award. Frustrated with racism when her recording label refused to promote her to some white audiences, she turned increasingly to small improvisational jazz groups where she performed some of her best work. While she was well known as "Queen of the Blues," Washington's skillful rapport with instrumental jazz musicians proved her to be one of the great female vocalists of the genre.

Miles Davis was swept up in the rising bebop movement in the 1940s, early on playing with Charlie Parker and later becoming perhaps the greatest innovator in jazz history. While he was interested in the fast runs, long solos, and creative chaos of bebop, Davis was also drawn to slow playing and quiet moments and was instrumental in developing the new "cool" style of jazz and moved away almost entirely from bop. Rather than imitate Dizzy Gillespie's soaring notes and high speed improvising, Miles developed a slow, thoughtful tone captured in the landmark album Kind of Blue (1959), perhaps the best-selling jazz recording of all time. More than anything, Davis defined himself by contradiction and experimentation, switching from "hot" bebop bands to "cool" introspective quartets and back again. After he went electric with the album In a Silent Way (1969) it was a short step to the revolutionary album Bitches Brew (1969/70), which launched the fusion movement in jazz. His musical interests eventually encompassed classical and world music, Spanish folk influences, funk, rock, and electronica. This picture from 1947 shows Davis in the center, sitting in on a session with Howard McGhee. 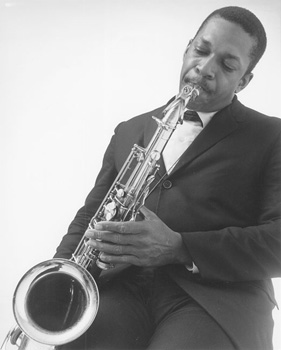 Growing up in a family where religion and music were highly valued, John Coltrane became a professional musician after being posted in Hawaii during WWII, where he played the clarinet in the military band. Switching to tenor saxophone, his virtuosic style landed him a spot in Dizzie Gillespie's big band, after which he went on to collaborate with Miles Davis and Thelonious Monk. Coltrane started his own band in 1960 and began producing music that was characterized by aggressive, fragmented solos and group improvisation. Embracing experimental styles and an avant-garde technique, Coltrane pushed the limits of jazz and became famous both for his instrumental skill and his improvisational genius. Coltrane died at age forty, at the height of his powers as an instrumentalist and bandleader, in the midst of exploring avant-garde jazz, an experiment cut tragically short by cancer.