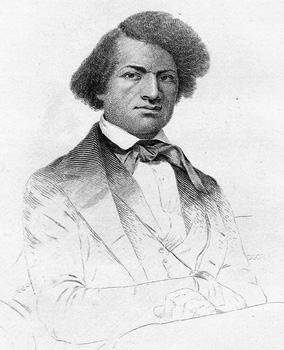 Courtesy of University of Rochester Library, Department of Rare Books and Special Collections.

Widely recognized as the premier African American leader of the nineteenth century, Frederick Douglass was a tireless abolitionist, reformer, author, and orator who devoted his life to combating the evils of slavery and championing the cause of his people. Born a slave on Maryland's Eastern Shore in 1818, Douglass was an implacable enemy of oppression throughout his life, fighting against slavery until Emancipation and in favor of women's rights and black suffrage in the decades that followed. A prolific author and a gifted speaker, Douglass's powerful voice and dramatic speaking style made him a celebrity both in the United States and in Europe. This engraved portrait was the frontispiece for Narrative of the Life of Frederick Douglass, his first autobiography, published in 1845. 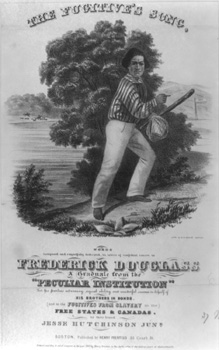 Separated from his family at age six, Douglas spent the first twenty five years of his life as a slave in Maryland. His rebellion against slavery began while working as a domestic servant in Baltimore, when he taught himself how to read and write at age twelve and disobeyed his master by buying a book. Increasingly independent-minded, at age sixteen Douglass was subjected to brutal labor and merciless whippings at the hands of a slave breaker at his home in St. Michael's, Maryland. This treatment led Douglass to make a failed attempt to escape slavery in 1836, after which he was sent back to Baltimore to work as a caulker in the shipyards. It was from Baltimore, with the aid of his future spouse Anna Murray, that Douglass finally managed to escape slavery by masquerading as a free black merchant sailor. This image comes from a lithograph sheet music cover of "The Fugitive's Song," a piece dedicated to Douglass by the composer Jesse Hutchinson Jr., a member of a family of vocalists who were staunch abolitionists and antislavery lecturers. In it the young Douglass, dressed as a sailor, hides from the mounted men and dogs who pursue him, pointing to a sign labeled "New England." 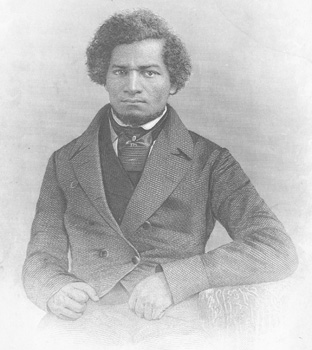 Courtesy of University of Rochester Library, Department of Rare Books and Special Collections.

In the late 1830s Douglass became involved in local antislavery activities in his new home of New Bedford, Massachusetts. He decided to become an orator in 1839 after hearing a speech by the renowned abolitionist William Lloyd Garrison. Douglass quickly discovered his talent for delivering impassioned, compelling speeches and by 1841 he was employed by the Massachusetts Anti-Slavery Society as a full time lecturer. Douglass's strident calls for the end of slavery in the South and of segregation in the North made him a celebrity in the abolitionist movement but also exposed him to rough treatment and occasional violence from hostile crowds. This portrait, engraved by J. C. Buttre from a daguerreotype, captures a sense of the young man's frustration, anger, and determination in the face of opposition 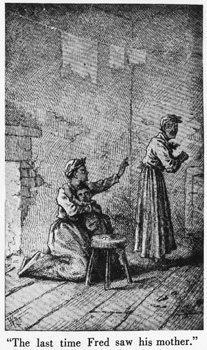 Douglass increasingly drew upon his experiences as a slave for his speeches. He decided to put his story into print in 1845, when he published Narrative of the Life of Frederick Douglass, an American Slave, Written by Himself. The book was an instant success, selling over thirty thousand copies in its first five years and sparking a twenty-one month lecture tour of Great Britain. Douglass would go on to publish two more autobiographies over the course of his life. This image, part of a triptych from Douglass's third autobiography, Life and Times of Frederick Douglass, shows Douglass being taken from his mother, a slave named Harriet Bailey, at age six. Regarding his mother, Douglass wrote that his few "meager glimpses" of her "are ineffaceably stamped upon my memory. She was tall and finely proportioned, of dark glossy complexion, with regular features, and amongst the slaves was remarkable sedate and dignified." Bailey died in 1825, when Douglass was eight years old. 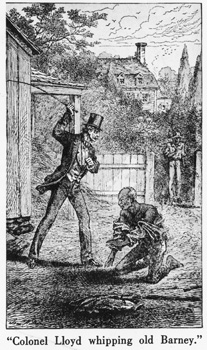 This image from Life and Times of Frederick Douglass shows Colonel Edward Lloyd, the owner of Whye Plantation and the largest slaveholder in Maryland, whipping an elderly ostler named Barney. Douglass witnessed the incident and later wrote of it as "one of the most heart-saddening and humiliating scenes I ever witnessed. . . . 'Uncover your head,' said the imperious master; he was obeyed. 'Take off your jacket, you old rascal!' and off came Barney's jacket. 'Down on you knees!' down knelt the old man, his shoulders bare, his bald head glistening in the sunshine, and his aged knees on the old, damp ground. In this humble and debasing attitude, that master, to whom he had devoted his best years and the best strength of his life, came forward and laid on thirty lashes with his horse-whip." 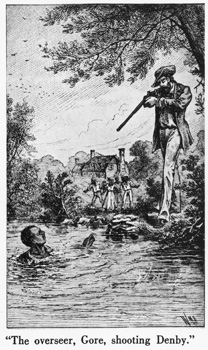 This image from Life and Times of Frederick Douglass shows the death of Bill Denby, a slave who was shot to death by one of Edward Lloyd's overseers. Although Douglass did not witness this event as he had the whipping of the ostler Barney, he nevertheless wrote of it as an example of the brutal punishment and the lack of justice for enslaved blacks. According to Douglass's account, Denby "offended this Mr. Austin Gore, and in accordance with the usual custom the latter undertook to flog him. He had given him but few stripes when Denby broke away from him and plunged into the creek. . . . Gore raised his gun deliberately to his face, took deadly aim at his standing victim, and with one click of the gun the mangled body sank out of sight, and only his warm red blood marked the place where he had stood." 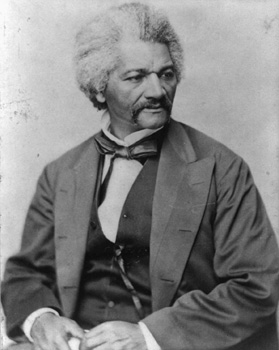 After his successful lecture tour in Great Britain and the publication of his popular first autobiography, Douglass was widely recognized as the most influential African American of his time. He returned to America in 1847, having purchased his freedom with the help of several British abolitionist friends, and moved his family to Rochester, NY. Increasingly militant in his views on slavery, he broke with William Lloyd Garrison and the pacifist Quaker element of the abolitionist movement and devoted his energies to the publication of the abolitionist newspaper The North Star. Distressed by the continued plight of southern blacks and the passage of the Fugitive Slave Law of 1850, Douglass became willing to join political parties, harbor fugitive slaves on the Underground Railroad, and ally himself with potentially violent radicals in the fight against slavery. 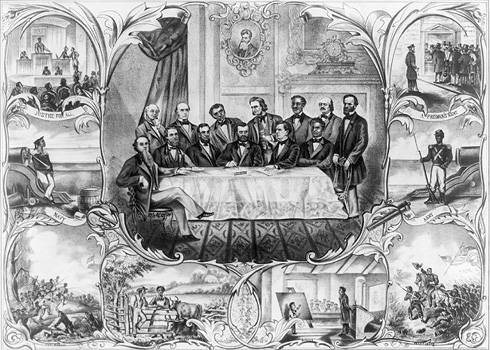 This print by C. Rogan is entitled "The Fifteenth Amendment, Signed by President U. S. Grant, March 1870." The central panel shows Frederick Douglass seated at a fictional gathering meant to symbolize Republican support for black rights. The artist's liberties can be seen in the fact that Abraham Lincoln is shown seated to the immediate right of Grant, although Lincoln had died five years earlier. The figures are (seated, left to right) Edwin W. Standon, Schuyler Colfax, Abraham Lincoln, U. S. Grant, William H. Seward, Frederick Douglass; (standing, left to right) Horace Greeley, Salmon P. Chase, Robert Smalls, Charles Sumner, Hiram R. Revels, Benjamin Franklin Butler, and William Tecumseh Sherman. The portrait on the wall is of John Brown, with whom Douglass had conspired prior to Brown's failed raid on Harper's Ferry, VA, in 1859. 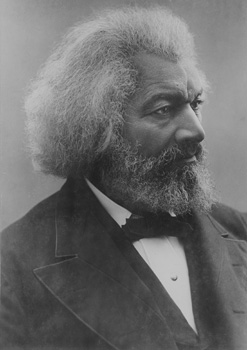 Like many African Americans, Douglass was frustrated when Reconstruction failed to grant blacks the equal rights they deserved, especially in the South. He nevertheless remained loyal to the Republican party, supporting its candidates throughout his life. This loyalty won him appointment to the highest political offices that any African American had yet held, serving as federal marshal and recorder of deeds for the District of Columbia, president of the Freedman's Savings and Trust Company, and minister and consul general to Haiti. He also continued to be widely sought as a popular lecturer. This photograph was taken for the frontispiece of Life and Times of Frederick Douglass, New Revised Edition of 1892. 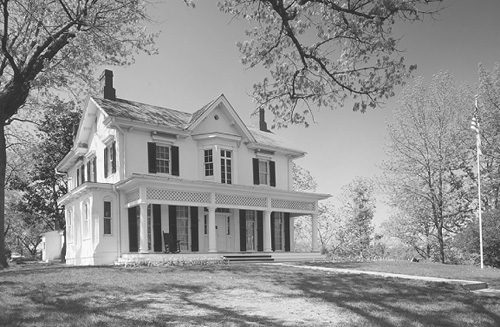 Courtesy of the National Park Service.

In 1872 Douglass's home in Rochester, NY, burned under suspicion of arson. Having lost many important papers and wishing to make a new start, he moved his family to Washington, D.C., in 1878. This is a photograph of Cedar Hill, Douglass's home in the Uniontown section of Washington, where he lived with his family from 1878 until his death in 1895. Douglass wrote many of his post-Reconstruction speeches and articles in his study at Cedar Hill, as well as his third autobiography, Life and Times of Frederick Douglass. After his death the house was purchased, preserved, and opened to the public by the Frederick Douglass Memorial and Historic Association and by the National Association of Colored Women. Today it is a National Historic Site that houses Douglass's library and is furnished much as it was in his lifetime, with some of his personal belongings and with items from his public life. 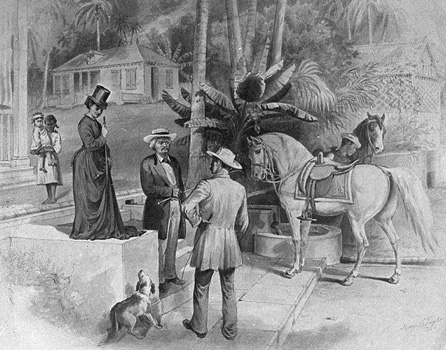 Courtesy of the National Park Service.

Douglass remained active and outspoken in his later years, serving as minister to Haiti from 1889 to 1891. While in this post he became an unwilling agent of American expansionism in the Caribbean by unsuccessfully attempting to negotiate special shipping concessions for American business interests and the lease of land for a naval base at Môle St. Nicholas. He eventually resigned in disgust and returned home, where he devoted his energies to the emerging antilynching movement. This drawing by the American illustrator James E. Taylor, c. 1891, shows Douglass, facing the viewer, wearing a panama hat. The woman standing to his right has been identified as Victoire, the mistress of President Hyppolite of Haiti, who was a widower at the time Douglass was the U.S. Minister there. 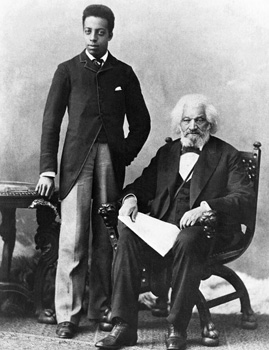 Douglass is photographed with his grandson, Joseph Douglass, an acclaimed violin player who was widely viewed as Douglass's favorite grandchild. Joseph often appeared at lectures with his grandfather in the 1890s, and was one of several artists who performed at the Colored People's Day at the World Columbian Exposition of 1893. 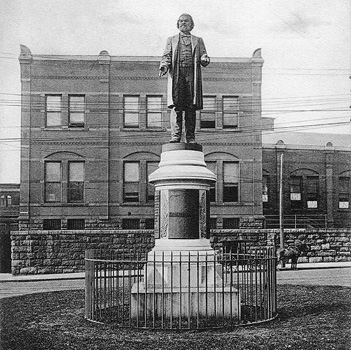 Courtesy of University of Rochester Library, Deparement of Rare Books and Special Collecions.

Douglass died of a heart attack at Cedar Hill on 20 February 1895, having just returned from a rally for women's suffrage. He was buried in Rochester, NY, where many members of his family still lived. This statue of Douglass, designed by Sidney W. Edwards, was unveiled in Rochester on 9 June 1899; this photograph was taken at its original site, Central Avenue and St. Paul Street. The statue was later moved to Highland Park, where it was rededicated on 4 September 1941.