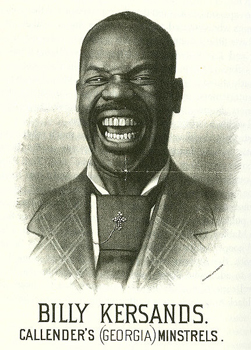 As shocking as its crude spectacle now appears, minstrelsy was one of the few vehicles for black economic and artistic advancement in postwar nineteenth-century America. Billy Kersands, arguably the era's most popular minstrel, traveled across the United States in "a private railway carriage that he purchased outright" (Cullen); Charles B. Hicks, Kersands's troupe manager with the Original Georgia Minstrels, organized trips to Germany, New Zealand, and Panama to perform. Though frequently appalling, the minstrel show introduced satirical exaggeration and slapstick, often subversively, to American audiences. Once troupes—which had begun as white men in "blackface" made of burned cork—became predominately black, they gained substantial black support as well. Many of the most important entertainers and comedians of the late nineteenth century and early twentieth century either got their start in or became famous through the minstrel circuit, including Bert Williams, Ma Rainey, and Dewey "Pigmeat" Markham. 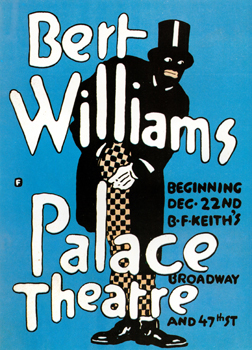 Promo art for Bert Williams performance at the Palace Theatre, once the country's most important vaudeville stage. Courtesy of Photofest.

Called the "saddest man I ever knew" by his fellow Ziegfield Follies performer W. C. Fields, Bert Williams was a symbol of thwarted African American ambition. Williams, who was born in Antigua, West Indies, to an affluent family and studied for a time at Stanford University, spent his entire life playing down-on-their-luck minstrel stereotypes, a role "as foreign to him as an impersonation of Hamlet or Othello" (Stowe). Cultivated and reserved off stage, Williams was forced to hew to degrading stereotypes to make a career. Nevertheless, he played the self-described "shiftless darky" role exceptionally, and his 1903 musical In Dahomey, which costarred his acting partner George Walker, was the first black performance to appear on Broadway. From 1910 to 1919 he joined the cast of the Follies, the only black member of the famed New York revue. Williams was a gifted actor, and his popularity stemmed from his characters' self-conscious exaggeration, timing, and wit, all elements that would become staples of American comedy. His trademark jokes consisted in large part of "word play or lampooning usually solemn institutions such as church, marriage, or funerals," subjects relatable to all races. His legacy has since been widely acknowledged, but by the time he died in 1922, at age forty-seven, Williams was still performing the same narrow roles that had defined his entire professional life. 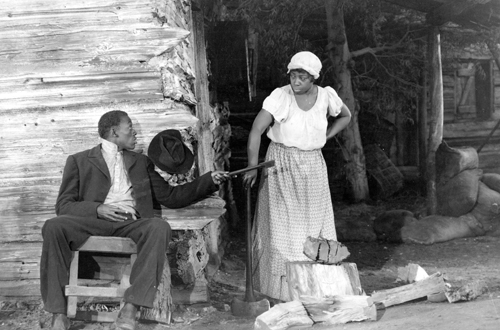 Stepin Fetchit as "Gummy" in 1929 film Hearts of Dixie. Courtesy of Photofest.

Much like Bert Williams, "Stepin Fetchit" (birth name Lincoln Perry) was a talented comic actor relegated to playing crude African American stereotypes. Perry acted in almost fifty films over the course his career, his best-known role being Gummy in Hearts in Dixie (1929), an all-black musical that "set the standard for the Stepin Fetchit image and performance"; said performance consisted of a "shambling gait, laconic expression, and drawling, garbled speech" (Petty). Despite their severe casting to type, Perry and other black actors such as Hattie McDaniel tried their best: "Sambo and Mammy film roles, respectively, became dominant personalities within their small scenes, with the joke being on the white characters around them" (Burroughs). In 1939 McDaniel earned an Academy Award for Best Supporting Actress in Gone with the Wind. Meanwhile, Perry would pay dearly for his life's work. By the 1960s, he had fallen well out of favor, having had little success in pursuing mainstream film roles, and having become a target of ostracism by civil rights and Black Power activists. 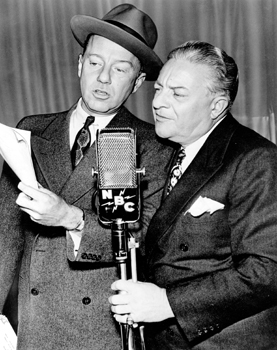 Long a shorthand for racist caricature, Amos 'n' Andy has in recent years had somewhat of makeover as scholars have reexamined the radio show, a onetime "national obsession" that drew in 40 million Americans (Ely). The program, which depicted the lives of Alabaman transplants Amos Jones and Andy Brown to Harlem, was actually created and voiced by two white Chicagoans, Freeman F. Gosden and Charles J. Correll, and first premiered in 1926 as Sam 'n' Henry. It was an immediate hit, and after a contract dispute Gosden and Correll moved to a rival station, renaming their show Amos 'n' Andy. From the start, Sam 'n' Henry had been envisioned as minstrel radio show; though as the series progressed, the radio historian Elizabeth McLeod argues in The Original Amos 'n' Andy, the show became more universal in tone, "celebrating the virtues of friendship, persistence, hard work, and common sense." True or not, the show was harshly criticized by leading African American newspapers at the time of its airing. In 1951 a television version was produced, this time starring black actors. It lasted through 1953, but remained in syndication until 1966, when NAACP pressure on CBS forced Amos 'n' Andy off the air permanently. 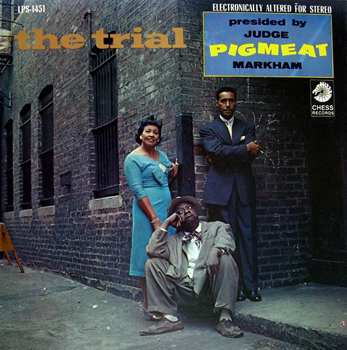 Though he began his career in blackface, Dewey "Pigmeat" Markham lived long enough to see his nonminstrel work appreciated. Markham—who some sources claim ran away to join the circus at age thirteen—made a name for himself on the Chitlin' Circuit, the famed black entertainment tour that produced stars such as "Moms" Mabley, Bill "Bojangles" Robinson, and "Ma" Rainey, performing in various vaudeville, minstrel, and stand-up routines in the early 1900s. Markham's career spanned six decades, but it wasn't it until Sammy Davis Jr. copied a routine of his on Rowan & Martin's Laugh-In, in 1969, that he attracted the attention of white audiences. The skit, "Here Come de Judge," was a fan favorite of Markham's and had been developed in the 1920s. In it, a comically inept "judge" portrayed by Markham would dispense outrageous verdicts (and quips), inspired, according to the music historian Bill Dahl, "on the outlandish racism African Americans often faced in court, particularly from judges in the southern United States at that time." Markham, who died in 1981, was a prolific entertainer, having participated in practically every medium of the twentieth century: movies, television, recordings, and live performances. 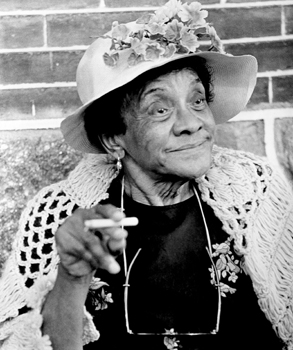 Like "Pigmeat" Markham, Jackie "Moms" Mabley got her first break performing on the Chitlin' Circuit. Also like Markham, mainstream success came much later in life, when inroads in integration had made her newly accessible to white American audiences. Though not the first successful female comedian—Susie Edwards, one half of the duo Butterbeans and Susie, came before Mabley and is credited with having discovered her—she was the first woman to record a certified-gold comedy album. Moms Mabley, the Funniest Woman in the World was recorded in 1960 and sold over a million copies. Mabley's hallmark act was taking on the persona of an ill-adjusted, foul-mouthed, elderly woman, a routine described in a 1962 Ebony feature as "[creating] the impression that the theater cleaning woman has somehow wandered into the spotlight." Under the guise of a harmless senior, Mabley unleashed a torrent of biting social and political satire, marking the evolution of comedy from the slapstick of earlier eras and "foreshadowing the subject matter that would become the focus of sharp, edgy comedy in the 1960s" (Logan). 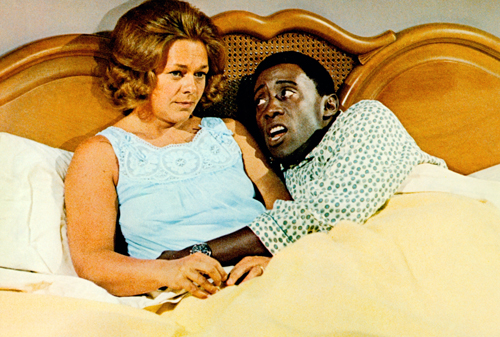 The Canadian-raised son of West Indian professionals, Godfrey Cambridge was an erudite, worldly wit, and represented a departure from the aw-shucks stereotypes that pervaded black casting decisions. While Cambridge never shied away from racial tropes—"Nothing worries [a white] more than the sight of a Negro walking down his street carrying the real estate section of the New York Times" remains one of his most enduring jokes—he spent the latter part of his career battling attempts to pigeonhole him as a "black comedian" or "black actor." Cambridge's biggest break came in 1964, when he made multiple appearances on The Jack Paar Program, a precursor to The Tonight Show, and became an audience favorite. Almost unthinkable even a decade earlier, by the early 1960s the entertainment industry had (slowly) begun offering African Americans more universal roles, allowing Cambridge the liberty to "do the little things that bug me" (Nachman). He had ample opportunity before his untimely death in 1974, having made several best-selling recordings and acted in plays, television, and movies, often portraying a variety of ethnicities and sexes. Godfrey remains best known for his race-based material, though much of it couched in generic American class-consciousness, such as his famous explanation that "[now] we carry an attaché case—with fried chicken in it. We ain't going to give up everything just to get along with you people." 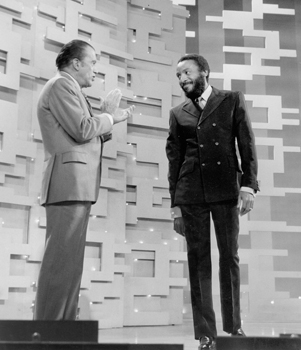 The rise of Dick Gregory in the late 1950s marked a significant development in American comedy. Prior to Gregory, a stinging, political raconteur, it was rare for any American comedian to examine racism in his routine (explicitly racist caricatures portrayed by Bert Williams and other minstrel stars notwithstanding). Godfrey Cambridge, a contemporary of Gregory, often made lighthearted—though brilliant—asides on racial differences, but from the start of his career Gregory was unapologetic about his views on American race relations. In a representative jest, in 1965 he remarked about football that "[it's] a fair sport for my people. Only sport in the world a Negro can chase a white man and 40,000 people stand up and cheer him." Interestingly, at the same time Gregory was shocking American audiences, another famous Philadelphia comedian, Bill Cosby, was doing precisely the opposite. Cosby, who by the 1980s would eclipse Gregory in popularity, shied away from racial topics almost entirely. Though close friends, the two came to represent the opposite poles of the comedy spectrum: pure entertainment versus social critique. 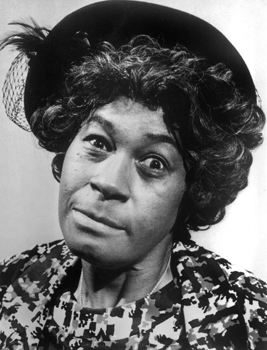 While never transcending race-based typecasts, Lawanda Page demonstrated that the inanities of everyday life were hardly exclusive to race. Her most famous role came as Aunt Esther on Sanford and Son, the popular mid-1970s black sitcom starring Redd Foxx, where she played a religious, ever-contentious killjoy who was constantly feuding with her brother-in-law (Foxx). Sanford, which aired on NBC, was a sanitization of sorts—like Chitlin' Circuit coperformers Foxx, "Moms" Mabley, and Skillet & Leroy, Page had made her name in "blue" comedy, the term for bawdy, hypersexual routines—but its success proved that white Americans would respond to a show with an "undercurrent of the political and social condition of African Americans frequently mixed in" (Burroughs). Page was a gifted stand-up, as well as a sought-after insult comic, participating in the roasts of Jimmy Stewart, George Burns, and Dean Martin.