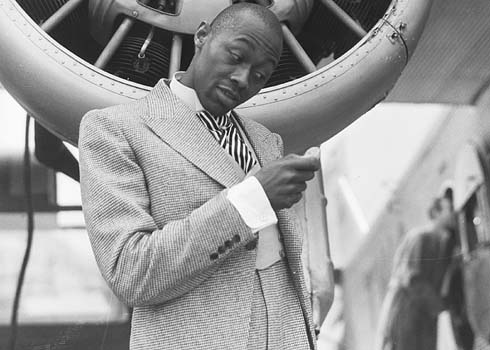 The first African American movie star Stepin Fetchit, born Lincoln Theodore Monroe Andrew Perry, began his career as vaudeville performer. In the 1920s when sound was added to motion pictures and America's desire for entertainment moved from stage to film so did many vaudeville actors. As was the case in the early days of film, and later television, black actors took the work that was available and in many cases the roles written for African Americans were steeped in racial stereotypes. In films such as In Old Kentucky (1927) and Hearts in Dixie (1929—shown here) Fetchit played characters that were lazy, dimwitted, inarticulate, and slow—all deeply negative racial stereotypes characteristic of the time. Stepin Fetchit's career ended in 1930s in part due to criticism from civil rights groups. Criticism of Fetchit did not end with his film career and in 1968 he sued CBS for vilifying his role in the history of cinema. While history does not look back kindly on the roles that Fetchit depicted there is no doubt that as the first African American movie star Fetchit opened innumerable doors. 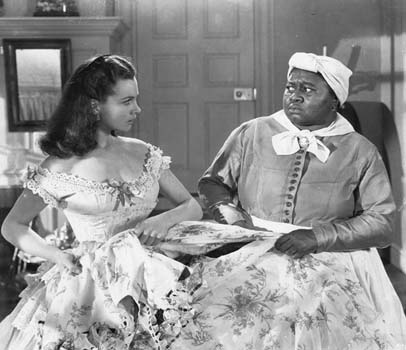 In 1939 Hattie McDaniel became the first African American to win an Academy Award. McDaniel received the Oscar for her performance as Mammy in Gone With the Wind. Like Stepin Fetchit, McDaniel was criticized by the National Association for the Advancement of Colored People (NAACP) for taking a role portraying the stereotype of a servile mammy. As McDaniel was one of the best known black actors of that period and she built her career by playing servants, she was a natural target for the NAACP. During the 1930s and 1940s the NAACP put a great deal of effort into addressing the negative portrayals of African Americans in film and radio. In many instances this effort to change social norms resulted in direct confrontations with black actors who were viewed as letting down their race. 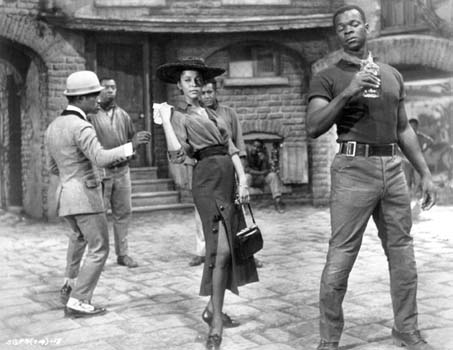 While black women had starring roles in movies before her, Dorothy Dandridge was arguably the first black woman movie star. During the 1950s Dandridge appeared in such films as The Harlem Globetrotters (1951), Jungle Queen (1951), and Porgy and Bess (1959—shown here). Dandridge's position as an attractive black actress put her career in a precarious position. She was considered too attractive not to play the role of the leading lady yet, due to fears of negative reactions to interracial romance by viewing audiences, she was not cast in roles where the leading man was white, which greatly limited the number of roles offered to her. In 1955 Dandridge was nominated for an Academy Award for her role in Carmen Jones (1954); she was the first black actor to be nominated for an Oscar in a starring role. A black woman would not win Best Actress until 2001 when Halle Berry won for her role in Monster's Ball. 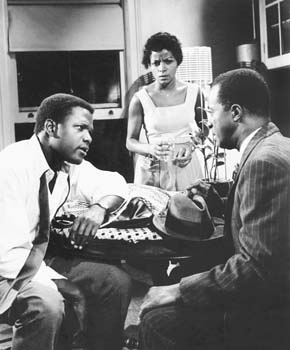 Courtesy of The Everett Collection

Though 1967 was a banner year for the acclaimed actor Sidney Poitier (in that year he starred in three films that are all considered classics today—To Sir with Love, In the Heat of the Night, and Guess Who's Coming to Dinner?), it was three years earlier that Poitier became the first African American to win an Oscar for a starring role in Lilies of the Field (1963). Poitier is shown here in the 1961 film adaptation of A Raisin in the Sun playing the part of Walter Lee Younger, a role he made famous. Poitier actively sought roles and films that portrayed African Americans in a positive light. Ironically, considering the criticism that earlier actors like Stepin Fetchit and Hattie McDaniels received, Poitier was criticized for always playing the stereotype of "the Good Negro" who never stepped outside the lines of propriety.. 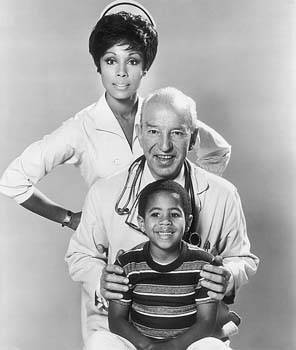 In the 1950s, television shows such as The Nat "King" Cole Show, Beulah, and Amos 'n' Andy, featured black actors in leading roles but during the early 1960s the only black actors on television were playing supporting roles. But in 1968 Julia a new primetime show premiered that revolved around a black character, a black woman at that. It was the first time a television show featured a professional black woman. Diahann Carroll played the title role of a widowed nurse who worked for a gruff yet loveable white doctor and inhabited a mainly white world. The writers for Julia did attempt to address race in the show but mainly as running jokes showing how racism can put one in "humorous" situations. The depiction of simplified race relations proved to be tedious to both black and white viewers and the show was canceled after three years. 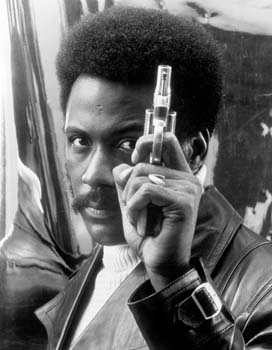 The 1970s brought about a new genre in film, the so-called blaxploitation film. Two of the most recognized blaxploitation films were created by a father and son. In 1971 Gordon Parks Sr. wrote and directed Shaft; a year later his son Gordon Parks Jr. released Superfly, one of the most controversial films of its time. Superfly; was created on a limited budget with an all-black cast and crew. It went on to make tens of millions of dollars and would be highly criticized for its portrayal of crime, urban life, and machismo. While the blaxploitation films, as the named suggests, capitalized on exploiting preconceptions of blackness and racialized stereotypes of criminality, sexuality and masculinity, the films in 1970s heralded an explosion of black presence in Hollywood films in acting, producing, and directing. Blaxploitation films helped shape the careers of performers such as Pam Grier, Fred Williamson, and Richard Roundtree, as well as the soundtrack composers Isaac Hayes and Curtis Mayfield. 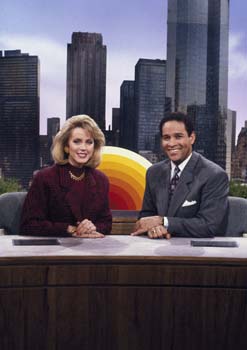 Bryant Gumbel began his career in television in 1972 as a sportscaster on KNBC-TV in Los Angeles, California. By 1981 Gumbel had transitioned to newscasting and was a co-anchor on NBC's Today show where he remained until 1997. A daily fixture in the morning routine of many Americans, Gumbel became one of the most recognizable black newscasters in the United States. In 1989 Gumbel faced scandal when a memo he had written criticizing his fellow newscasters was leaked to the public. While Gumbel's reputation was somewhat tarnished he went on to produce some of his most important work including a "Special Report" on Africa. In November of 1993 Gumbel broadcast for a week from Harare, Zimbabwe, and delivered some of the more balanced news reporting on Africa at that time. For his efforts in Zimbabwe, he received the Journalist of the Year Award from the National Association of Black Journalists. Gumbel currently hosts Real Sports with Bryant Gumbel on HBO. 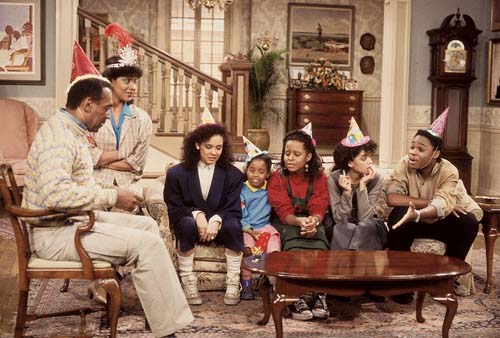 With the 1980s came The Cosby Show. The depiction of an upper-middle-class black family living in Brooklyn proved irresistible to the American viewing audience and The Cosby Show became one of the most watched television shows in history. Even so, The Cosby Show was often criticized for not dealing with issues of race directly enough and for portraying an idealized and unrealistic family. This critique was often tied to the show taking place primarily inside the Huxtables' home, producing an idealized world sheltered from more realistic and less comedic situations. Family sitcoms of the same period such as Family Ties and Who's the Boss followed the same tradition of living room and kitchen-based sets yet these shows did not face the same types of criticism because they were not centered on an African American family. 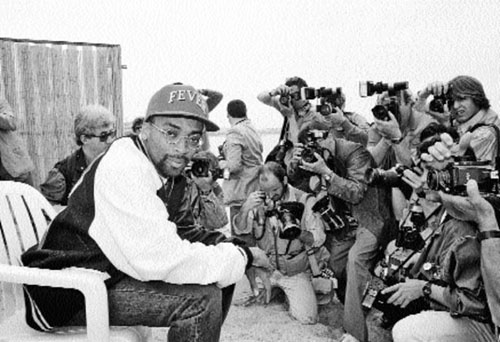 Filmmaker Spike Lee has consistently created films that depict, challenge, and celebrate African American characters, life, and culture—the positive and the negative, the serious and the comic. Beginning with the highly acclaimed She's Gotta Have It (1986), and continuing with such successes as School Daze (1988), Do the Right Thing (1989), Malcolm X (1992), and more recently Inside Man (2006), and When the Levees Broke (2006), an epic documentary that tracks the travesties of Hurricane Katrina. Following a career-long fight for more refined and equitable representation of African Americans in film, in June of 2008 Spike Lee and Clint Eastwood entered into a very public and heated argument over Eastwood's lack of black soldiers in his recent World War II films. Lee attempted to fill that gap with his most recent film Miracle at St. Anna, which follows a unit in an all-black U.S. army division in Italy during the Second World War. 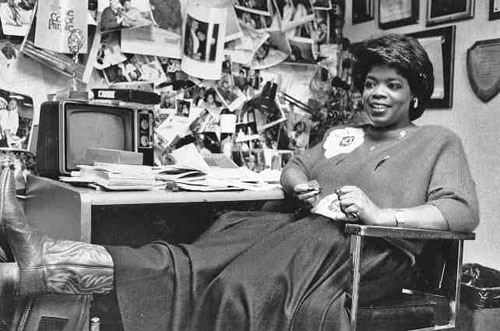 Oprah Winfrey began her career in Nashville, Tennessee, in the early 1970s and by the 1980s she had become a household name. Oprah is one of the most influential women in the entertainment business—some would say the world—and with a fortune valued at well over a billion dollars, she is certainly one of the richest. The stretch of Oprah's influence can be felt in many ways, from the additional sales authors can expect from being picked for the Oprah Book Club, to her magazines and radio shows, or her humanitarian efforts. Most recently she became more directly involved in politics when she campaigned in support of Barack Obama as the next president of the United States. The stretch of Oprah's influence on America is perhaps best exemplified by her confrontation with the large and politically powerful cattle industry. In 1998 Oprah was blamed—and subsequently sued—by the cattle industry for causing beef sales to plummet when she announced that she wasn't eating beef due to her fear of contracting Mad Cow Disease.