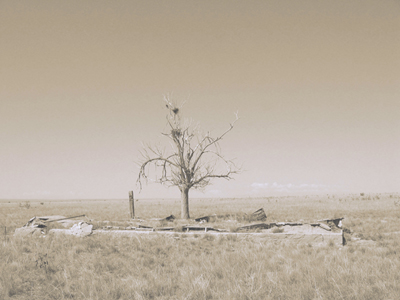 Archaeological remains of Viola and Ralph Mitchell's second homestead at the Dry (1950s-1970s). Courtesy of the author, 2010.

The importance of African Americans in the West is widely acknowledged, but often the history of small, rural black communities goes unrecognized in western states' historic narratives, which are often dominated by pictures of white pioneer men wrestling and conquering nature. Though subject to much criticism, the idea of the "frontier" and the depiction of a triumphal settlement of the West as a part of the American character (Turner 1893) still persist in the national culture. This notion highlights a Euro-American-centered history full of romantic imagery: settlers traveling long distances, leading wagons and family to homestead in a land of open, endless prairie, rolling hills, and tall grass. Academics have debated this imagery as nothing more than ethnocentric, sexist, environmentally insensitive, and unduly celebratory (e.g., Armitage 1994; Billington and Hardaway 1998; Limerick 1991; Painter 1976; Taylor 1998). 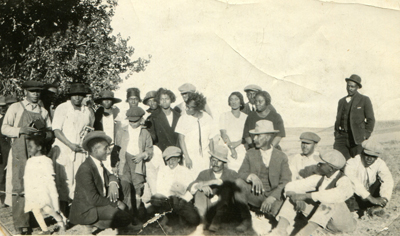 Consequently, scholars now see the West as much more complex, varied, multi-vocal and multi-racial than popular myths portray. As scholarship on African Americans in the West grows (e.g., Billington and Hardaway 1998; Moos 2005; Painter 1976; Taylor 1998), issues of identity and how the African American experience was defined racially have become central (Baker Jr. 1972; Moos 2005) in an attempt to reject the traditional concept of "frontier." Population movements, such as the "Exodusters," and all-black towns came to national attention, developing into symbols of African American independence and self-governance. Nicodemus (Kansas) was the first predominantly black town in the West to receive national recognition and came to represent the pinnacle of black political, economic, and social success. Smaller places–Dearfield (Greeley, CO) and "The Dry" (Manzanola, CO), for example–continue to be mostly unacknowledged and to have their contributions to the history of the West effaced. By providing diverse narratives of African American homesteading beyond the widely acknowledged approaches, we are able to not only challenge the veracity of the Western frontier myth, but also complicate western identity and bring to the forefront marginalized narratives.

Although individual African Americans had moved to the west throughout the early decades of the 19th century, it was in the years following the end of the civil war and the end of Reconstruction that thousands of African Americans migrated to western regions in an attempt to move away from the socio-economic and political oppression of the south. Encouraged by the advertisement of bountiful land, African Americans migrated to Kansas and neighboring states, forming the movement known as Exodusters (Painter 1976). They acquired land, developed homesteads, and started a number of all-black towns mainly in Kansas, Oklahoma, and Texas. By the turn of the century, 765,000 African Americans lived in the West (Moos 2005, p. 60), focusing on building towns and agricultural colonies as collective enterprises in a project of racial uplift (Micheaux 1913, 1917). Many black towns, including Nicodemus, soon began to decline as a result of dry conditions and the unpredictability of rainfall. The fate of many was sealed when the towns were bypassed by the railroad and dwellers started moving to cities. 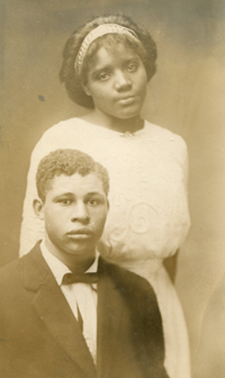 The original Homestead Act of 1862 had provided homesteading of 160 acres, after payment of a fee, claimed in deed after settlers had lived on the land for five years and showed evidence of having made improvements. But the lack of means to acquire sufficient land to ensure economic success, allied with the harsh conditions, made farming too uncertain. The 1909 Enlarged Homestead Act, an amendment to the 1862 Homestead Act, recognized that prime alluvial land was not available anymore and, considering the aridity of areas such as the Great Plains, provided claims of 320 acres, leading to a new movement to the West. Unlike the Reconstruction "Exodusters," who were mainly former slaves, the new settlers hoped to convert their claims to dryland farming, thus venturing further west from their original communities. The area known as "The Dry" was one such early 20th-century African American small homesteading community, located eight miles south of Manzanola in southern Colorado. White homesteaders, ranchers, and others had been in the Manzanola-Rocky Ford area since the 19th century. George Swink, a local entrepreneur, had acquired a significant amount of land in the Arkansas River valley, aiming to expand irrigation farming through the construction of a series of canals and dams. According to oral information, Swink prompted Josephine and Lenora Rucker, two sisters who worked in domestic service in his household, to persuade families and acquaintances to move to Manzanola and homestead their own land. 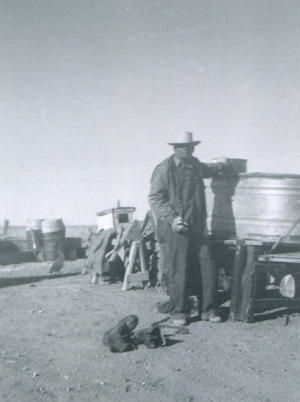 The first African American settlers started arriving at The Dry around 1915, including the Craig family, which moved from Nicodemus. According to Lulu Craig, families were lured by tales of rich grazing and the knowledge that the payment of a $10 fee could temporarily hold a claim. Soon, between 30 and 50 African American families had made their homes in the bleak landscape of The Dry. In a 2011 interview Mrs. Alice McDonald (née Craig) recalls her mother, Rolan Dixon's, first impressions in arriving at The Dry: "My mother told us that what she remembered was that there were no trees. She felt like crying, but it was too late to go back. My grandfather stopped at the ridge asking directions to some men working there and they told him to turn back. But they had no money to go back and had to stay in Colorado." (Author interview with Alice McDonald.) Settlers collectively attempted to build an irrigation system using water from the Apishapa River, but after the system's collapse during the 1923 floods, it was never rebuilt, as homesteaders realized that irrigation farming was an impossible task. In the early 20th century, farm experts (Campbell 1907; Hargreaves 1957) believed that dryland farming, uniquely dependent on natural rainfall and using non-irrigated crops, such as wheat, corn and beans, could be successful and provide profits when practiced on large-scale acreage. Nevertheless, dryland farming in Southern Colorado proved unsuccessful and homesteaders started taking jobs in nearby towns and in the railroad, while others took to dairy farming, the land reverting to pasture. The Dust Bowl–devastating dust storms of loose soil occurring in the Great Plains during the 1930s draught, resulting from deep plowing–crushed the last hopes for farmers at The Dry, and few families stayed after this time. All were gone after Viola (Craig) Mitchell died at The Dry in 1974. 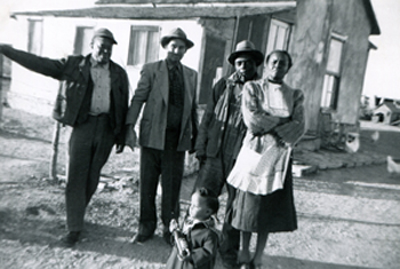 As with other rural communities, recollections of the descendants from The Dry seem to indicate a large measure of mutuality among community members and a relaxation of culturally determined barriers, including gender and racial barriers. It is acknowledged that the homesteading experience enhanced female status and autonomy, with women sharing responsibilities that altered the traditional gender division of labor, and freed them from traditional gender constrictions. At The Dry it was not unusual for women to hold land deeds, to be mentioned as pillars of the family, and to have central roles in maintaining local social networks. Unlike urban black communities that were rigidly segregated in enclaves within cities and towns (e.g., Five Points in Denver), the rural population in Manzanola seems to have maintained more relaxed relations with its white and Hispanic neighbors. Mrs. Alice McDonald, who lived at The Dry until the mid-1950s, recalled that the harshness of the land contributed to relationships among homesteaders' neighbors that seemed to dismiss racial differences: "We were all very poor and had to help each other to survive." Inter-racial marriages were not uncommon, but the presence of the KKK in the area was a continuous reminder of Jim Crow racial ideology. Descendants of homesteaders recognize that their presence was tolerated and not challenged because African Americans were a very small minority in relation to the overall population. 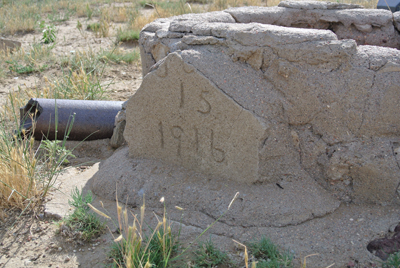 Cistern at the Viola and Ralph Mitchell homestead. Note the date, July 1916, possibly the date of construction. Photo by Jessica Unger, 2012, courtesy of the author.

Between 2010 and 2012, archaeological research at The Dry located 10 black homesteads, including an intense survey in five dwellings ranging from 1916 to the 1970s, as well as a test excavation at one of the earlier sites. Survey and excavation have yielded a large number of artifacts related to domestic life which, when paired with interviews of descendants, have opened a window into the daily lives of those in the African American homesteading community. According to oral information, most homesteads may have started with dugout constructions (including living spaces, root cellars, and outhouses). As families became established, they built more permanent constructions, including frame houses and outbuildings. Initially the settlers attempted agricultural activities and collectively built a series of irrigation ditches and dams, but soon it became clear that irrigation agriculture was not feasible. Families restricted their farming to smaller gardens in which they produced Indian corn, beans, peas, and squash for domestic consumption, and often homesteaders sought work in nearby towns or as hands in neighboring ranches. Still others, such as the Craig family, supplemented their income with small-scale dairy production. A small schoolhouse was the first communal building to be erected, serving also as a place of worship and gathering location for other activities. 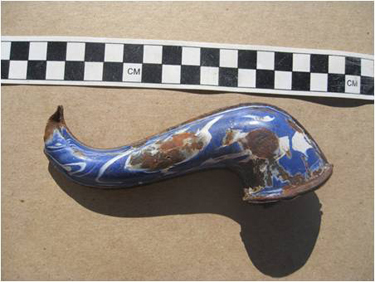 Archaeological remains of Viola and Ralph Mitchell's second homestead at the Dry (1950s-1970s). Courtesy of the author, 2010.

Artifacts at The Dry are varied and document changes in patterns of consumption during the period in which the homesteads were occupied, contributing to an understanding of gender and identity construction among homesteaders. Domestic artifacts, found during the archaeological excavation and survey, include a wide variety of ceramic dishware, porcelain, and stoneware crockery. Artifacts related to canning, such as jar fragments, zinc lids, and milk glass lid liners, are some of the most common objects found to date. They contrast with less-common food cans, allowing us a window into the domestic economy of the homesteads, which relied on homemade products rather than more-expensive store-bought goods. Descendants talk about children living at several of the homesteads, walking to and from relatives' houses, and participating in household responsibilities and routine chores, such as hauling water with wagons and caring for smaller children. Likewise, archaeological research has yielded artifacts related to children's play, including porcelain doll parts, marbles, and a toy Roy Rogers sheriff's badge. 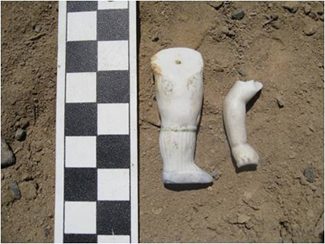 Arm and leg of small porcelain doll, archaeological object identified during the 2011 survey at The Dry. Courtesy of the author.

The recollections of The Dry's last descendants currently living in Southern Colorado are very different from the utopian black homesteading ventures described by Oscar Micheaux in his novels The Conquest (1913), The Homesteader (1917) and The Wind from Nowhere (1941), which centered on stories of black settlers in the West. While Micheaux presents homesteading as a primarily masculine enterprise (not different from its white popular culture counterpart; Turner 1893), the narratives collected at The Dry, using complementary data from written documents, oral family histories, and archaeological material culture, strongly attest to women's considerable status within the family and the community. The hard life of settlers, the losing battle against the prairie, and the homesteads' relative isolation did not preclude a great sense of community and pride in the ownership of the land, which continues even today. Local recollections among African American, Hispanic, and white families speak to a complex history that goes beyond the stereotypes of the Wild West, reminding us of a shared destiny among diverse populations who see homesteading, and black homesteading in particular, as a heritage to remember and preserve. 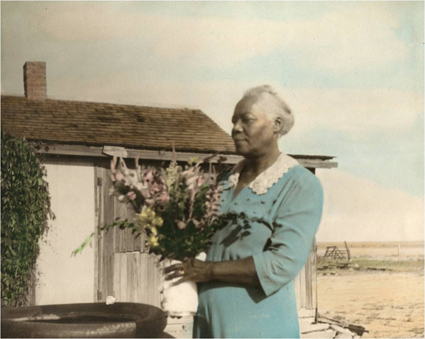 Lulu Craig, one of the earlier settlers at The Dry, on her 80th Birthday in 1949. Photo possibly by Rolan Craig. Courtesy of Mrs. Alice McDonald.

Campbell, Hardy Webster. Campbell's 1907 Soil Culture Manual: A Complete Guide to Scientific Agriculture as Adapted to the Semi-Arid Regions. The Proper Fitting of the Soil for the Conservation and Control of Moisture and the Development of Soil Fertility; how Moisture Moves in the Soil by Capillary Attraction, Percolation and Evaporation; the Relation of Water and Air to Plant Growth, and how this May be Regulated by Cultivation. Lincoln, NE, The Campbell Soil Culture Co. (1907).

Micheaux, Oscar. The Conquest: The story of a Negro pioneer. U of Nebraska Press (1913).

M. Dores Cruz (LINK DOES NOT WORK)
Department of Anthropology
University of Denver