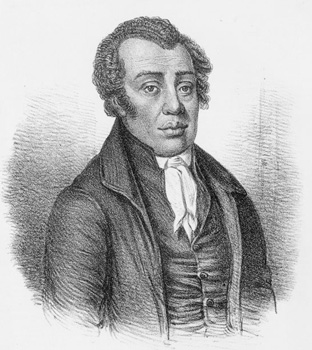 Born a slave in Philadelphia in 1760, as a young man Richard Allen experienced a spiritual awakening that led him to convert to Methodism and begin preaching to both blacks and whites in Maryland, Delaware, Pennsylvania, and New Jersey. Feeling a call to minister to "his African brethren," in 1786 he organized a prayer society of forty two members with the help of his colleagues Absalom Jones, William White, and Dorus Ginnings. However, after Allen and his companions were forcibly removed from St. George's Parish after unknowingly sitting in a white-only gallery, Allen went his own way and in 1794 established Bethel Church in Philadelphia, the first independent black church in North America. Allen's decision to remain a Methodist while providing an opportunity for blacks to worship freely led to the creation of the African Methodist Episcopal (AME) Church, of which Allen became the first bishop in 1816. He is shown here in a lithograph by Peter S. Duval, c. 1840, from a portrait by an unknown artist. 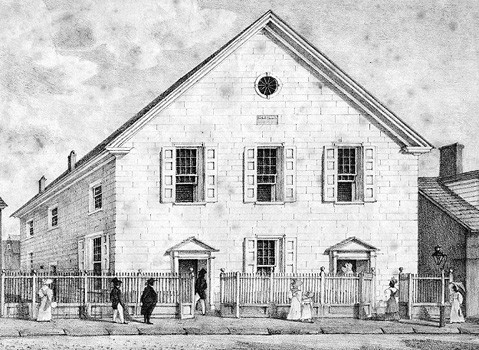 Courtesy of Library Company of Philadelphia.

The Bethel Church was founded in 1794 by Richard Allen and eleven like-minded Methodists who wanted to create an independent black church where they would be free of the prejudice they had experienced at the racially mixed St. George's Parish. The site of the church was originally an old blacksmith shop, but the group soon moved to the building on the corner of Sixth and Lombard Streets in Philadelphia that is shown here. Allen, the church's first preacher and later deacon, led Bethel to join with five other black Methodist congregations in 1816, resulting in the establishment of the African Methodist Episcopal Church. This image was drawn in 1829 by William L. Breton. 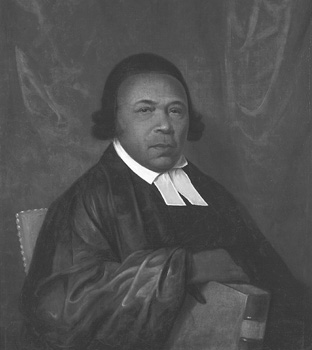 Courtesy of Schomburg Center for Research in Black Culture.

Absalom Jones also left St. George's Parish after being literally pulled from his knees by white parishioners while in the midst of prayer, going on to found St. Thomas Episcopal Church in Philadelphia in 1794. Unlike his colleague Richard Allen, who remained a Methodist despite the discrimination he endured within the church, Jones became an Episcopalian and in 1804 was ordained as the first black priest in the Episcopal Church. From 1795 until his death in 1818, he baptized 268 black adults and 927 black infants. Thanks to his tireless ministry to the African American community, Jones became known as the "Black Bishop of the Episcopal Church." He appears here in his ministerial robe, holding a Bible, in an oil portrait by Raphaelle Peale from 1810. 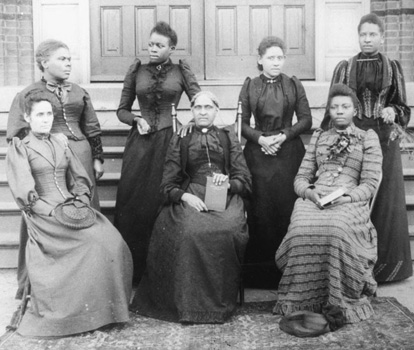 The black Baptist church grew rapidly in the years following the Civil War, as black Baptists gained the freedom to worship outside of the control of white-controlled churches. From Reconstruction throughout the twentieth century, women played a major role in establishing and invigorating the black Baptist community. Baptist women have consistently formed the largest group of black Christians in America, and within the Baptist church itself women continue to comprise more than 60 percent of black membership. Although long faced with gender discrimination that barred them from leadership positions, women formed the heart of the church by visiting the homes of sick parishioners, participating in Bible readings, donating clothes and food to the needy, counseling prisoners, establishing nurseries and orphanages, supporting education and vocational training programs, crusading temperance, and supporting a number of other causes. Over the course of the twentieth century, the growing number of Baptist women missionaries increased the influence of black women both within the Unites States and abroad. This image shows the 1893 graduating class of the Missionary Training Department of Spelman Seminary. The class included such notable women as Emma De Lamotta (front row, center), who was born a slave in 1836 and went on to lead the department until her death in 1903. 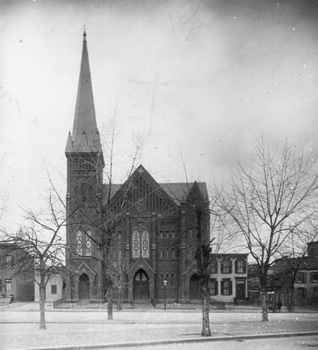 The Vermont Avenue Baptist Church in Washington DC was one of the first churches founded in the period of black Baptist expansion that followed the Civil War. Established by freedmen and women in 1866, the church is shown here in a photograph taken in 1899 and is still standing today. In 1964 it provided a scholarship to Shirley Ann Jackson, a local parishioner who went on to become a physicist, educator, and both the first African American and the first woman to head the U.S. Nuclear Regulatory Commission. 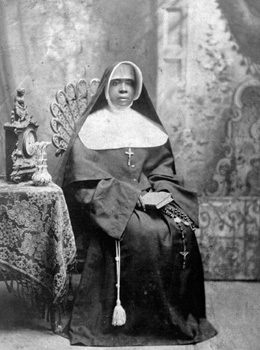 Like their white counterparts, black Catholics were a small minority in the United States until the mid-nineteenth century. Catholicism also spread slowly among African Americans. Catholic orders such as the Ursulines and the Jesuits held slaves well into the nineteenth century, the U. S. Catholic Church was slow to condemn slavery, and American bishops did not proselytize to freedmen and women after the Civil War nearly as enthusiastically as their Protestant counterparts. Nevertheless, immigrants from Haiti and elsewhere ensured that Catholicism did take root and grow within the African American community. Three brothers — Frances Augustine Healy, Alexander Sherwood Healy, and Patrick Francis Healy — were ordained as priests in 1854, 1858, and 1864, respectively, and rose prominently within the Church. In addition, in 1831 Pope Gregory XVI recognized Mother Mary Elizabeth Lange's Oblate Sisters of Providence, the first black order of nuns established in the Catholic Church. Other orders, such as the Sisters of the Holy Family and the Franciscan Handmaids of the Most Pure Heart of Mary, were to follow. This photograph shows Sister Suzette Jacuqes, c. 1890. 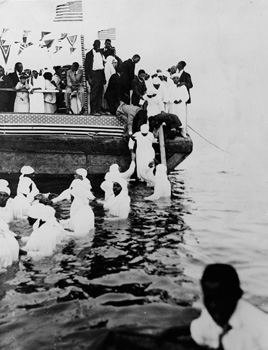 The ritual of baptism is an important sacrament in all Christian churches, and plays a particularly vital role for the many Protestant groups that have for centuries ministered to the African American community. The spiritual cleansing offered by baptism appealed strongly both to slaves seeking rebirth and salvation from a life of misery and toil, and to free people looking for change and spiritual meaning in their lives. The Baptist church continues to place full-immersion baptism at the heart of its teachings, while many evangelical churches base their philosophy around Jesus' words in Jn 3:4: "Unless a man is born again of water and the Holy Spirit, he cannot enter the Kingdom of God." This photograph from c. 1900–1925 shows an annual baptism in the James River, presided over by Bishop "Daddy" Grace. 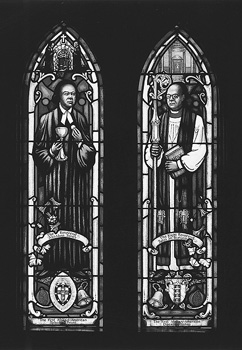 Like his predecessor Absalom Jones, John Melville Burgess served the Episcopal Church with tireless devotion. In 1962 he became the first black priest to be popularly elected suffragan bishop of the Diocese of Massachusetts within the regular order of the Episcopal Church, and in 1969 was promoted to diocesan bishop. Although African Americans had served as bishops within the church before, their ministry had hitherto been restricted to black parishes. As bishop, Burgess devoted himself to revitalizing urban ministry, confronting racism in public education, advocating prison reform, fighting the restoration of the death penalty, and providing crucial leadership during the Boston school desegregation crisis. By working to build bridges between black and white communities, Burgess's popular leadership heralded a new era of integration and cooperation within the Episcopal Church. He appears here (right) in the Burgess Window at Grace Episcopal Church in Vineyard Haven, Massachusetts, with Absalom Jones. 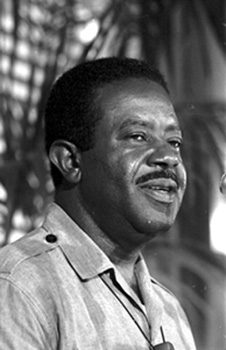 Black churches played a decisive role in the civil rights movement of the 1960s, most notably the Southern Christian Leadership Conference (SCLC) organized by Martin Luther King, Jr. Ralph Abernathy first met King after hearing him deliver a sermon at Ebenezer Baptist Church in Atlanta, and quickly became one of his closest friends and allies. As one of many ministers who bridged politics and religion in the struggle to win equality for African Americans, Abernathy took the lead in mobilizing the black churches of Montgomery, Alabama, for the bus boycott of 1955, eventually becoming the key figure of the boycott movement. Abernathy was at King's side when he was assassinated on 4 April 1968 and succeeded him as president of the SCLC. He remained with the group until 1977 and continued to be an outspoken proponent of civil rights as pastor of West Hunter Street Baptist Church in Atlanta, which he held until his death in 1990. 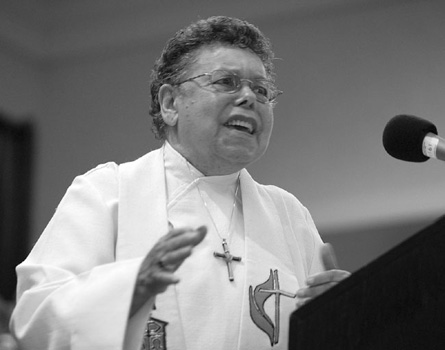 In the summer of 1969, Leontine Kelly felt a call to become an ordained minister and left her full-time job teaching high school to devote herself to formal study for a degree in theology. Her subsequent rise within the hierarchy of the United Methodist Church illustrates the expanding opportunities for women to serve as religious leaders in the late twentieth century. Highly active in the United Methodist clergywomen's movement, a campaign devoted to greater involvement of clergywomen in all areas of church activity, in 1984 Kelly was elected bishop after only nine years of service as a pastor. She thus became the first African American woman to be bishop of any major religious denomination in the United States, but was certainly not the last — four more African American women have been elected bishops in the Methodist Church since Kelly's retirement in 1988. In October 2000, Kelly was inducted into the National Women's Hall of Fame in Seneca Falls, New York. 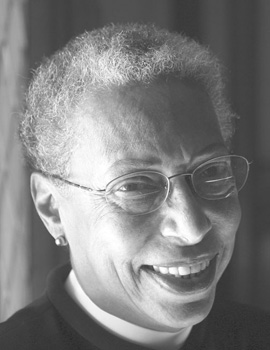 Courtesy of Robert Burgess, from Episcopal Diocese of Washington.

Barbara Harris spent thirty two years in the corporate world pursuing a groundbreaking career as a public relations consultant in which she worked hard to dismantle barriers for both women and African Americans in a predominately white male profession. Always active in the Episcopal Church, in 1974 she led a march into the Church of the Advocate in Philadelphia in support of the controversial ordination of eleven women into the priesthood. Not long after, Harris herself felt a call to the priesthood and became an ordained priest in 1980. She continued to be an outspoken advocate of women's equality in the Episcopal Church, both in a weekly magazine column and at the Lambeth Conference, a gathering of Anglican bishops held by the Archbishop of Canterbury every ten years. In spite of opposition from those who viewed her as the radical spokeswoman for the liberal element of the Episcopal Church, Harris was elected as bishop in 1988 and consecrated in 1989. Despite protests at her ordination and a growing specter of schism in the Episcopal Church over the ordination of gay priests, Harris remains committed to the belief that the church must continue to embrace diversity if it is to continue thriving into the new century.