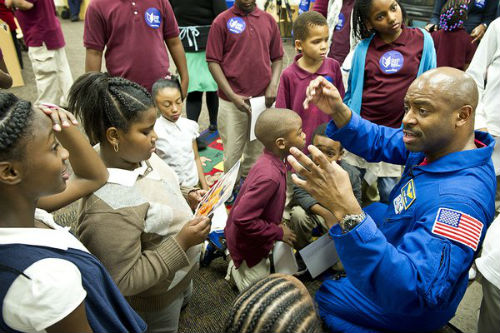 Astronaut Leland Melvin spoke to students in Washington, D.C., sharing a commitment to education much like the young African-Americans who integrated NASA in the 1960s. Photo, by Carla Cioffi, courtesy of NASA.

Despite significant obstacles, African Americans have played an important role in the American space program. So far, fourteen have gone into space, while hundreds of others have served in research and leadership roles, making contributions necessary for space travel to become a reality. From the earliest years of American space research, during the time of segregation and legal, open discrimination, to the 21st century, African Americans have transcended political and social barriers and have been part of all aspects of these programs, from the tragic to the magnificent. Nonetheless, legal and institutional barriers slowed their progress, and it took decades for their contributions to be fully acknowledged. The fact that African Americans were so long a part of space research, but not represented in space flight missions, did not go fully unnoticed, however. President John F. Kennedy pushed the nation's space program and military to rectify the problem. After Kennedy's assassination, however, the political pressure disappeared, and progress slowed, but did not stop. 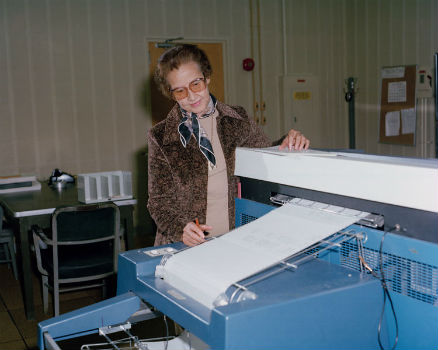 Katherine Johnson photographed at the Langley Research Center in 1980. Courtesy of NASA.

After graduating summa cum laude with Bachelor of Science degrees in French and Mathematics from West Virginia State College at only eighteen years of age, Katherine Johnson went on to teach elementary and high school. In 1953, she started working at NASA—in facilities that were still segregated—at the Langley Research Center. Employed as a mathematician, Johnson's equations were necessary for working out the trajectory of the first manned flight, undertaken by Alan Shepard in May 1961, and of Apollo 11, the first spaceflight to the moon. In 1962, she the calculated the trajectory of John Glenn's orbit around the Earth electronically, marking the first time a computer was used in such a process. Previously, everything had been done with pencil and paper; Johnson later joked that she was a computer at NASA "when computers wore skirts." Commenting on the complex calculations necessary for Shepard's flight, Johnson called them "easy," saying, "It was just a matter of shooting him up and having him come back down." Her indispensable work continued through the 1980s. 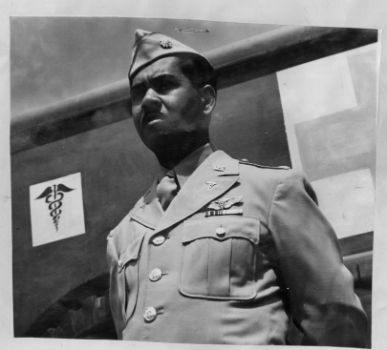 No one was entirely certain of the effects of space travel on the human body when the first astronauts went into space. Consequently, John Glenn, Neil Armstrong, and other pioneers had to have their vital signs monitored. How to do this—in space, from Earth—posed a problem, which was solved by Col. Vance H. Marchbanks, M.D. Given personal responsibility for John Glenn's health, Marchbanks collected data on vital signs before, during, and after the astronaut's flights. During Glenn's orbit of the earth, Marchbanks monitored the astronaut's condition from a tracking station in Kano, Nigeria, using a process Marchbanks helped to develop. Marchbanks' achievements professionally, like those of other African Americans, came during a time when legal discrimination was a huge obstacle. According to Jerry White of Nellis Air Force Base, "As an undergrad, Marchbanks was not permitted to live in a dormitory. Because of his color, he was forced to live in a boarding house off campus. The only place he was permitted to eat was at the local railroad station where he often found cockroaches had been placed in his food." Marchbanks retired from the Air Force in 1964, but continued his research. His studies on sickle-cell anemia, in which Marchbanks found that many people carrying the gene for the disease did not necessarily develop it, led the military to change a policy that put a premature end to the careers of many soldiers of African and Mediterranean descent. 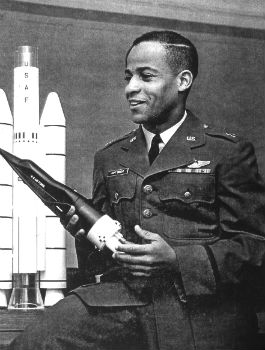 Thanks to political pressure exerted by President Kennedy, Edward J. Dwight Jr. was allowed in 1963 to enroll in the Air Force's Aerospace Research Pilot School at Edwards Air Force Base. Many assumed that Dwight would become the first African American astronaut. He seemed highly qualified, having earned an aeronautical degree and logging more than 2,000 hours of jet time in the Air Force. He was intimidated and harassed by white officers and candidates, but nonetheless graduated eighth in his class. He was one of eight students recommended to NASA for the space program, but NASA took only two, leaving Dwight out of the group of finalists. Amidst the controversy that followed, Dwight resigned from the air force in 1966. He has since become a prolific sculptor. 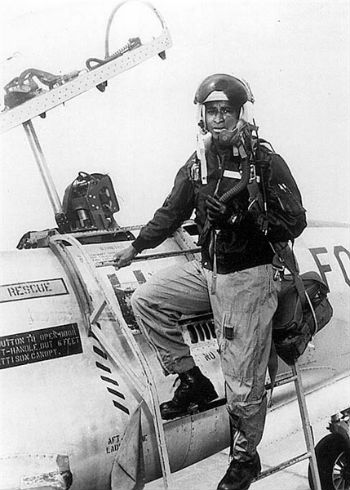 Air Force Maj. Robert H. Lawrence Jr. was the first African American chosen to be an astronaut. He died in a 1967 plane crash. Photo couresty of the U.S. Department of Defense.

The first African American selected to become an astronaut earned his flying experience in the U.S. Air Force. Robert Henry Lawrence Jr., a jet pilot from Chicago, was assigned in 1967 to the military's Manned Orbiting Laboratory program. The Air Force did not coordinate with NASA, but the research did help pave the way for Skylab and the International Space Station. Though an astronaut, he never went into space himself. Instead, Lawrence, who held a PhD in Nuclear Chemistry from The Ohio State University and had completed training at the Air Force's Aerospace Research Pilot School, carried out important research for the program. Here Lawrence left an important mark, developing the landing technique later used by orbiters in NASA's space shuttle program. What else Lawrence could have accomplished will never be known; he was killed in a plane crash in December 1967, just six months after becoming an astronaut. 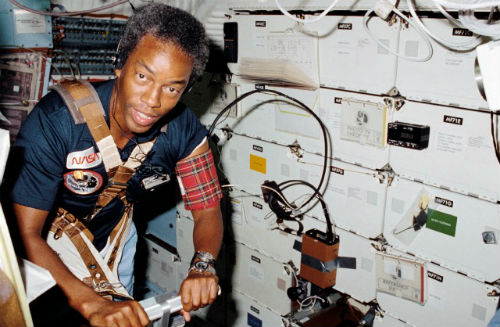 It would take another fifteen years for African Americans to have the chance to travel into space. This time the opportunity went to Guion S. Bluford Jr., Frederick Gregory, and Ronald E. McNair, who joined the NASA training program that year. Their qualifications were impeccable: they were three of just 35 people selected for the training—out of more 10,000 applicants. Bluford, who had a PhD in Aerospace Engineering from the Air Force's Institute of Technology, became the first African American man to actually go to space, which he did in 1983 aboard the Challenger, and three other times between then and 1993, when he retired. The African American community celebrated Bluford's mission, as did many others, including then U.S. President Ronald Reagan. The President phoned Bluford on the second day of his mission, saying, "You are paving the way for many others and making it plain that we are in an era of brotherhood here in our land." The flight was a "milestone," according to NASA, in that it was the first shuttle to launch and return at night. 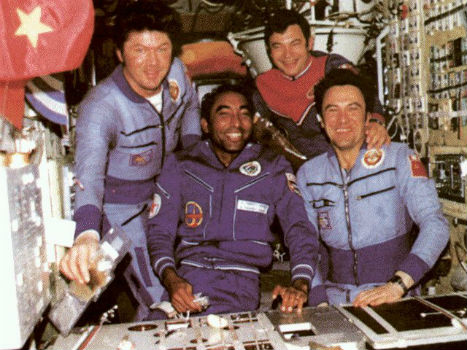 Stock image of Mendez, the first person of African descent to go into space, with crew of the Soyuz 38.

While Bluford was the first African American in space, he was not actually the first person of African descent to achieve this feat. Just as Soviet cosmonaut Yuri Gagarin was a few months ahead of Shepard, Arnaldo Tamayo Mendez was a few years ahead of Bluford. Mendez, a Cuban cosmonaut, traveled into space in 1980 on the Soyuz 38, launched by the USSR in cooperation with Cuba. While aboard the Soyuz, he studied the causes of Space Adaptation Syndrome and also carried out research aimed at benefiting Cuba's sugar industry. Mendez, a member of the Cuban Communist Party, became in 1980 a member of Cuba's legislative body and, in 1982, chief of the Cuban military's foreign relations department. He was awarded the title Hero of the Republic of Cuba and the Order of Lenin, the Soviet Union's highest honor. 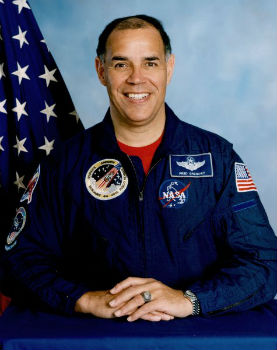 Frederick Drew Gregory, from the same class as Bluford, became the second African American to travel in space. Four years later, in 1989, he made his own place in history by becoming the first-ever African American space commander. Looking down at the Earth from space left a profound mark on Gregory, who remarked, "From space, you can't see discernible borders and you begin to question why people don't like each other, because it looked like just one big neighborhood down there. The longer I was there, the greater my [ideas about] 'a citizen of' changed." Gregory went on several more missions, until 1991, when he was space commander of the Atlantis. On that trip, his final voyage, he was able to avert disaster by successfully avoiding collision with a Soviet spacecraft after a navigation device failed. Back on Earth, Gregory received several promotions at NASA. In 2001, he became Associate Administrator for the Office of Space Flight, making him responsible for, among other things, management of the International Space Station and the space shuttle program. 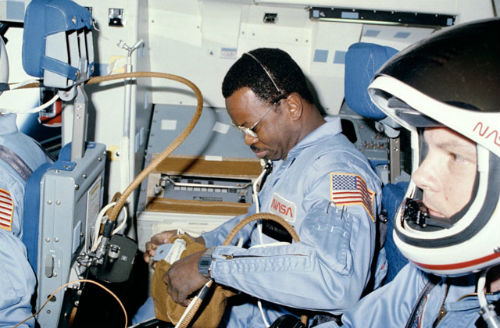 Astronaut Ronald McNair stows his gear as he and STS-41B crewmate Robert Stewart prepare for reentry. Photo and description courtesy of NASA.

Ronald E. McNair, another member of the historic class of 1978—which also included Sally Ride, America's first female astronaut—was aboard the tragic 1986 flight of the Challenger, which exploded moments after takeoff. The flight was only McNair's second mission. The abortive 1986 flight was only Ronald E. McNair's second mission. During his first flight, also on the Challenger, in 1984, McNair "played a key role in the development of the shuttle's remote manipulator arm," which was used for such things as retrieving damaged satellites. A musician, McNair also became on the first person to play the saxophone in space. In 1986, he was to have used the arm he helped develop to photograph Halley's Comet. While the Challenger is almost always mentioned in discussions of McNair, other parts of his life should not be forgotten. Before joining the space program, McNair had already become known for his drive and courage. Born in 1950 in segregated South Carolina, McNair—at nine years old—went to a white's only library and refused to leave until he was allowed to check out books. After the Challenger disaster, scholarships for disadvantaged young people were renamed in his honor in more than 200 colleges and universities across the country, including the federal Ronald E. McNair Postbaccalaureate Achievement Program.

In 2003, another African American made the ultimate sacrifice. Payload commander Michael P. Anderson lost his life when the space shuttle Columbia broke apart upon reentry over Texas. 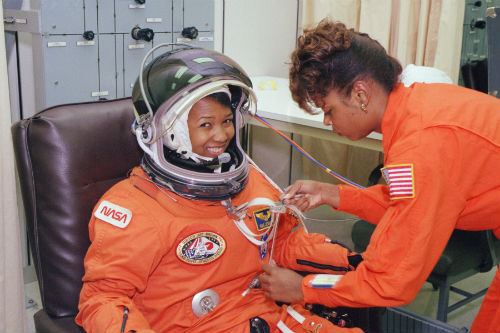 As long as African American men had to wait for space flight, African American women had to wait even longer. Born in Alabama in 1956, Mae Jemison moved to Chicago with her family when she was three years old, where she excelled in school but was harassed by street gangs. As an escape, she lost herself in fantasy, receiving inspiration from positive but imaginary black female role models, including Lieutenant Uhura in the Star Trek television series. She went on to Stanford University and the Weill Cornell Medical School, and later received a grant to travel to Cuba, Kenya, and Thailand to provide medical care. After serving in the Peace Corps, she applied to the NASA training program, becoming one of fifteen candidates selected for acceptance out of 2,000. Jemison became a member of NASA's first entering class after the Challenger disaster and traveled aboard the Space Shuttle Endeavour in September 1992. She resigned from NASA after only six years, going on to found businesses and philanthropic organizations, including The Earth We Share, an environmental camp for teenagers. In 1993, Jemison played Lieutenant Palmer in an episode of Star Trek: The Next Generation, a successor to the show that inspired her as a child. 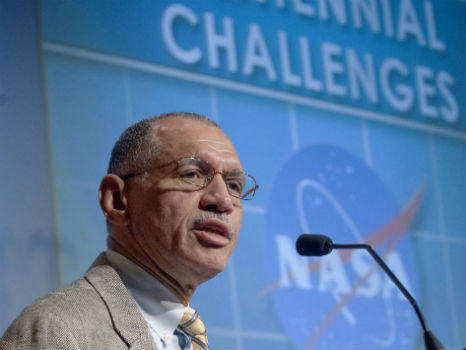 In 2009, President Barack Obama appointed Charles F. Bolden Jr. as the Administrator of NASA, making him the first African American to hold that office. As the highest American space authority, Bolden serves as the top advisor to the President on matters relating to exploration and research. With his position, Bolden has achieved another first, this one for all humanity: in 2012, his was the first human voice broadcast on Mars. Looking forward to what he says is now NASA's main goal—landing humans on Mars—Bolden's recorded message states, "Curiosity will bring benefits to Earth and inspire a new generation of scientists and explorers, as it prepares the way for a human mission in the not too distant future."