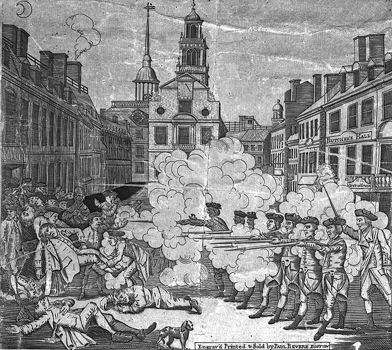 Perhaps the most famous martyr of the American Revolution, Crispus Attucks was the first of five men killed in Boston on 12 March 1770, when soldiers fired into a mob protesting the British military presence in the city. Notwithstanding his role as one of the leaders of an angry mob, Attucks quickly became a hero of "The Boston Massacre," whose murder at the hands of the tyrannical British became a rallying cry for patriots throughout Massachusetts and in the other colonies. Few details of his life are certain. Generally regarded as having mixed ancestry (African, Native American, and white), he may have been an escaped slave and was possibly a crewman on a Nantucket whaler docked in Boston harbor at the time of the Massacre. Regardless of the uncertainty about his past, Attucks remains one of the most famous figures from the tumultuous years on the eve of the Revolution. 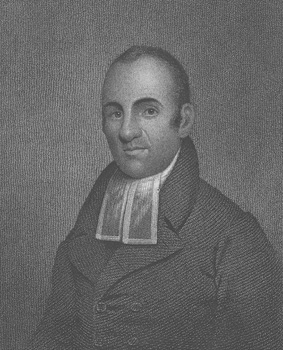 Lemuel Haynes was abandoned by his parents before he was six moths old and indentured as a young child to David Rose, a deacon at the Middle Granville Congregational Church in Connecticut. After experiencing a powerful religious conversion as a young man, he devoted himself to the theology and Bible study that prepared him for his later career in the ministry. Haynes signed up as a Minuteman after completing his indenture in 1774 and joined the Continental Army in 1776, fighting in the siege of Boston and with Ethan Allen's Green Mountain Boys at Fort Ticonderoga before being discharged due to a serious bout of typhus. A patriot throughout his life, after the war Haynes wrote a poetic ballad entitled "The Battle of Lexington" and also authored "Liberty Further Extended," a tract that blended Revolutionary political rhetoric and Calvinist theology to condemn slavery as a sin. 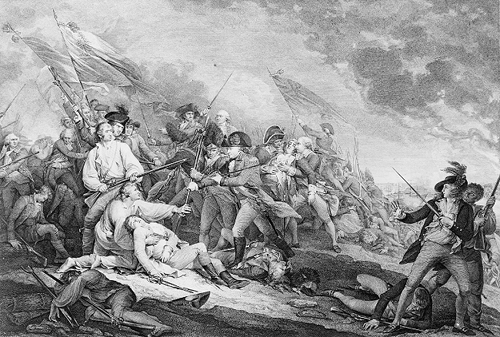 As member of Captain Benjamin Ames's company in Colonel James Frye's Fifth Massachusetts Regiment, Salem Poor was one of approximately three dozen black soldiers who fought in the Battle of Bunker Hill. Yet he was the only soldier, black or white, to be singled out for praise for his "distinguished" and "gallant"conduct in a document signed by fourteen officers after the battle. While the exact nature of Poor's role in the battle remains uncertain (he was originally commissioned to construct fortifications), according to tradition he shot and killed Lieutenant Colonel James Abercrombie, a high-ranking British officer whose death is pictured in the painting "The Battle at Bunker Hill Near Boston, June 17, 1775," by John Trumbull, shown here. Trumbull, who was present at the fighting, most likely depicted Salem Poor at the right, having just fired the shot that has felled Abercrombie, on the left. However, it is also possible that the painting depicts Peter Salem, another black patriot who fought in the battle. 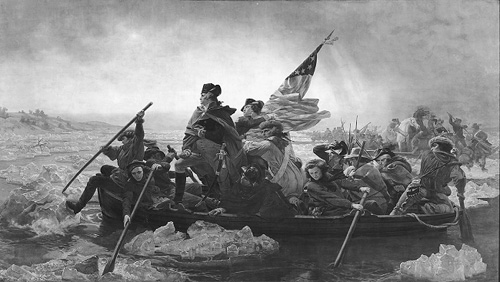 Courtesy of Metropolitan Museum of Art.

According to tradition Prince Whipple was born free in Africa and sent abroad to North America, where he was sold into slavery as a young man. He accompanied his master, a brigadier general named William Whipple, on military campaigns to Saratoga, New York, in 1777 and Rhode Island in 1778. In spite of his service he remained a slave during the Revolution, and in 1779 he was among twenty enslaved men who signed a petition to the New Hampshire legislature asking for the abolition of slavery in the state. Nineteenth-century tradition later placed him with George Washington at the crossing of the Delaware, although no documentation exists to verify this story. Indeed, according to other versions of the tale Washington was accompanied not by Whipple but by Prince Estabrook of Lexington, Massachusetts. Nevertheless, the tradition that a black man was present with Washington at the historic crossing is depicted in Emanuel Leutze's famous 1851 painting, "George Washington Crossing the Delaware." 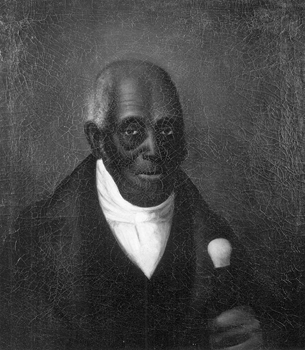 Agrippa Hull began his military service in 1777 as an orderly to General John Patterson. As a member of Patterson's staff, he was probably among the eight hundred black men who fought at the Battle of Monmouth in 1778. Afterward, he became an orderly for General Tadeusz Ko'sciuszko, a Polish officer who fought for the American cause, with whom he developed a close friendship. Hull assisted Ko'sciuszko for four years and two months, in which time he participated in the campaign in Saratoga, New York, and worked as a surgeon's assistant in South Carolina. Although he declined Ko'sciuszko's offer to accompany him to Poland after the war's conclusion, Hull traveled to New York to meet the Polish general upon his return to the United States in 1797. He remained proud of his service throughout his life, treasuring his discharge papers signed by George Washington and becoming a venerated citizen of his community of Stockbridge, Massachusetts, where he was well known for telling stories about the Revolution. This portrait in oils, painted in 1848 by an unknown artist who copied a daguerreotype of 1844 by Anson Clark, is one of the few formal portraits of an African American Revolutionary War veteran. 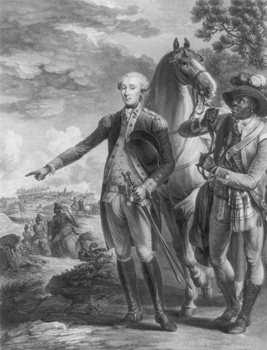 In 1781 James Armistead successfully petitioned his master to allow him to serve with the Marquis de LaFayette, the French noble fighting for the American cause. Armistead became a double agent in General LaFayette's service, infiltrating the headquarters of the British general Charles Cornwallis by pretending to be a Loyalist slave spying on the Americans. The intelligence he provided LaFayette helped secure the American victory in the last major battle of the war at Yorktown, Virginia in 1781. LaFayette was so impressed with Armistead's service that he successfully petitioned the Virginia legislature to grant him his freedom in 1786; in gratitude, Armistead added the general's surname to his own. Upon his return to America in 1824, when Lafayette saw Armistead in a crowd he called him by name and publicly embraced him. This engraving by Noel Le Mire from a painting by Jean-Baptiste Le Paon shows Lafayette in Virginia in 1781, directing American troops during the battle at Yorktown as a black soldier holds his horse. Although there is no evidence that the man in the painting is James Armistead, the Marquis remained a staunch enemy of slavery throughout his life and counted many blacks among his friends. 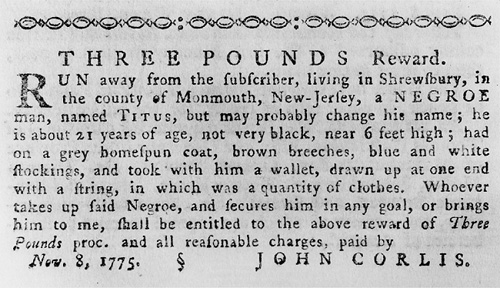 In 1775 Lord Dunmore, the British governor of Virginia, issued a proclamation promising freedom to all slaves who rallied to the King's cause. Dunmore's proclamation was designed to encourage the defection of useful slaves without instigating a general slave insurrection. Around five hundred of the slaves who answered Lord Dunmore's call were organized into an "Ethiopian Regiment," designated by uniforms with "Liberty to Slaves" emblazoned across the chest. The regiment remained small, however, since many of the slaves who joined Dunmore succumbed to smallpox and other diseases. Pictured here is a runaway ad for a slave named Titus, whose master promised a reward of three pounds to the person who returned the young man to bondage. 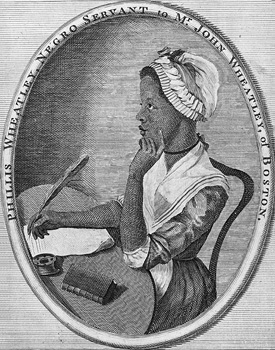 Not all patriots were men who fought in the war. Phillis Wheatley was one of America's first poets, and the first African American woman to have her work published. Born in Africa, she took her name from the Phillis, the slave ship that brought her to Boston from her native Africa, and from her master, John Wheatley. Wheatley was an ardent supporter of freedom both for America and for enslaved Africans such as herself. She published a collection of poems in 1772, which included a work memorializing the Boston Massacre. Wheatley also wrote a poem in honor of George Washington that she mailed the piece to the commander in chief at his headquarters in Cambridge, Massachusetts. When Washington replied enthusiastically with an invitation to visit him, Wheatley accepted and met with him for thirty to forty-five minutes in Cambridge. Washington also passed Wheatley's encomium on to a friend, and the poem was subsequently printed several times as an instrument for the patriot cause. Wheatley is shown here in a 1773 portrait by the African American engraver Scipio Moorhead, for the frontispiece of her Poems on Various Subjects, Religious and Moral. 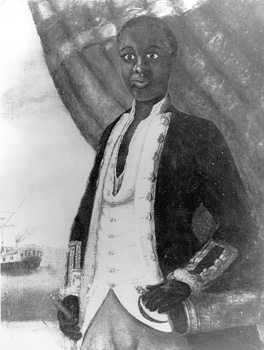 Courtesy of the Newport Historical Society.

According to one estimate, approximately five thousand black Americans took part in the fight for independence. Although many of these patriots, both free and slave, are remembered for their service, far more are now unknown. Unsurprisingly, in the generations following the war many views developed regarding the role African Americans played in the Revolution, some well-documented and others apocryphal, many favorable but some hostile. This painting c. 1780, thought to be of a Revolutionary War sailor, is a good example of the way later generations interpreted and sometimes even embellished black participation in the Revolution. Modern analysis of the painting has revealed that it was in fact reworked after its original composition, changing the skin color of the sailor from white to black. Perhaps the result of a nineteenth-century abolitionist effort to emphasize the role blacks played in the struggle for independence, the painting today presents an engaging historical puzzle and a reminder of how much we have still to learn about black contributions to early America. 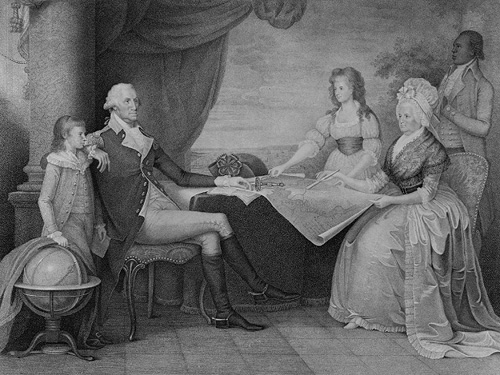 In many ways, George Washington himself embodied the Revolution's mixed message for African Americans. Like many of the Founding Fathers, Washington owned slaves throughout his life and was influenced by contemporary racist views about African inferiority. Initially opposed to black enlistment in the Continental Army, Washington reluctantly agreed to allow certain free blacks to fight after Lord Dunmore's proclamation threatened to bring black patriots over to the British cause. In time the valor of his patriotic black soldiers and his friendship with antislavery advocates such as the Marquis de LaFayette convinced Washington that slavery was economically unsound as well as morally wrong. Yet he maintained an ambiguous stance toward the institution, anxious to avoid fracturing the delicate sectional balance crafted at the Constitutional Convention. Washington's relationship with African Americans, like that of the new nation itself, was thus fraught with contradictions. The first President believed in "life, liberty, and the pursuit of happiness" but nevertheless signed the Fugitive Slave Law of 1793, viewed slavery as a moral evil but did not free his own slaves until after his death. Contradictions such as these would prove disastrous for the nation in years to come. Washington is shown here with his family and a black servant in a 1798 engraving by Edward Savage and David Edwin, entitled "George Washington, his lady, and her grandchildren by the name of Custis."