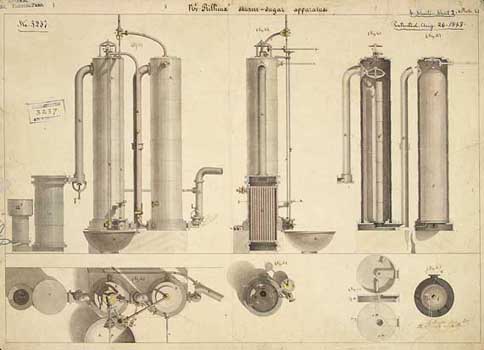 Norbert Rillieux was born into privilege in New Orleans, the son of a wealthy, landowning Creole mother and a white engineer father. Rillieux and his brother Edmond were educated in France, and by 1830 he was teaching applied mechanics at the École Centrale in Paris. In 1833 he returned to Louisiana, an important sugarcane producer due to its subtropical, Caribbean climate. At the time traditional methods of sugarcane distillation, known as the “Jamaica Train,” were dangerous and grossly inefficient; while tinkering in France, however, Rillieux had conceived a steam-driven process that could potentially increase yields and worker safety significantly. After various commissions from wealthy refiners fell through, in 1843 Rillieux finally patented his distilling device, simply called “Improvement in Sugar Works.” That same year Rillieux built distilleries for several prominent Louisiana planters, among them future Vice President of the Confederacy Judah P. Benjamin, to considerable financial success. 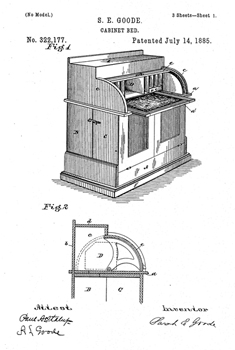 Sarah E. Goode was the first African American woman to win a patent, which she received in 1885 for her “Folding Cabinet Bed” (Patent No. 322,177), an efficiency device that formed a desk with drawers from a collapsed mattress. While little is known about Goode’s early life, she was born in the south (and, likely into slavery) in the 1850s, arriving in Chicago by the early 1880s. As the migration of African Americans to Chicago and other industrial cities of the north continued unabated, Goode found a successful enterprise in her furniture store. Strict restrictions on black neighborhood settlement coupled with the influx of newcomers brought inflated rents and cramped apartments, and, developed specifically for the purpose of space-saving, Goode’s design aimed to directly remedy these widespread difficulties. In 1919, a cramped San Francisco resident named William Murphy would update Goode’s space-saving bed with his own patent, though Murphy’s invention folded into a wall.

Engineer, railroad man, and inventor, Elijah J. McCoy, was born in Colchester, Ontario in 1843. Well-known to contemporaries as the African American with the most United States patents, by the 1880s McCoy had applied for and received over fifty patents, mostly concerning the lubrication of machinery found in vessels such as steam engines and ocean liners. McCoy also patented smaller inventions such as sprinkler systems and ironing boards. The term “the real McCoy,” so the popular legend goes, originated in the railroad industry in the 1870s in reference to the superiority of McCoy’s products. Customers would ask for the “real McCoy” to insure that they were not being cheated with a lesser design. Regardless of its origins, the saying soon made its way into American vernacular as a term for the genuine article. 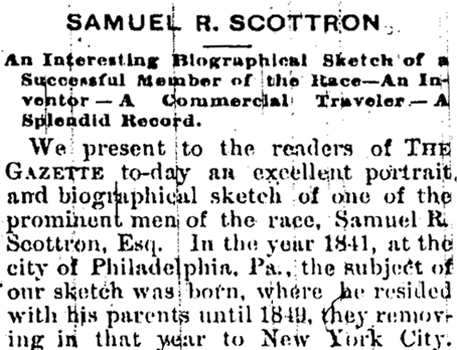 Self-made, enterprising, and doggedly patient, Samuel R. Scottron was the very embodiment of the Booker T. Washington ethos. After a stint as the sutler for a black Union regiment in 1863 nearly bankrupted him, Scottron, who was born in Philadelphia in 1841, moved to Springfield, Massachusetts to work as a barber. It was there he received his first patent (no. #76,253), awarded for an adjustable mirror in 1868; the idea took hold after observing the difficulty his customers had in viewing the sides and backs of their heads. The demand for his mirror was great enough that Scotttron moved to New York City two years later to manufacture them full-time. (To this day, a “Scottron Mirror” is a particularly coveted antique mirror). An outspoken advocate of trade education, Scottron enrolled in Cooper Union in 1873, graduating with an engineering degree in 1878. He would go on to patent over half-a-dozen other items, including the adjustable curtain rod, the pole tip, and an improved window cornice. Scottron is somewhat unique among early American inventors—and African American ones especially—in that he was able to substantially profit from his own ideas. 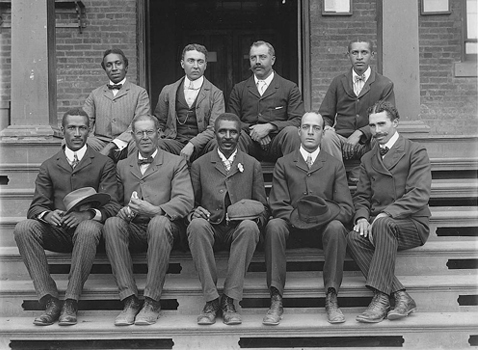 George Washington Carver is perhaps the most renowned African American scientist. Carver, shown here with his staff, was named the head of the Agriculture department at Tuskegee University in Alabama in 1896. During his career, Carver was concerned primarily with utilizing agricultural science to fight both poverty and malnutrition, doing so most famously by greatly expanding uses for the peanut. To increase crop yield Carver recommended that local farmers rotate cotton and peanut crops. He also encouraged communities to take advantage of the nutritional value of peanuts and other less-used crops such as pecans, cowpeas, and sweet potatoes, thus combating the malnourishment prevalent at the time. As the increase in peanut cultivation produced a large surplus, Carver went on to invent and improve upon multiple uses for it—flour, cheese, peanut butter, wood stains—that are commonplace today. Carver catalogued over 500 agricultural inventions but he patented only three, reasoning that the inventions were gifts from God and should not be sold. 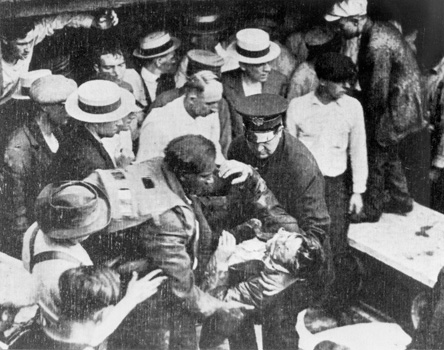 In 1914, while living in Cleveland, Ohio, inventor Garrett Morgan patented a new safety device to be used by firefighters. His “Safety Hood” was comprised of a protective helmet that covered the head and an apparatus that allowed the user a few moments of breathable air. At the turn of the century, Cleveland was conducting major efforts to create a waterway from the Erie Canal to the city. The construction of the tunnels was quite dangerous and over fifty workers died during the construction of the various waterways. When one of the tunnels collapsed on July 24, 1916, the Cleveland police department called in Morgan. He and his brother Frank entered the tunnel and, aided by the Safety Hood, were able to rescue two people and recover the bodies of several others. Morgan is shown above rescuing one of the workers; his device is visible on his back. As a result of his heroism and ingenuity, Morgan was awarded a contract with the U.S. Navy. He eventually reworked his safety hood into the gas mask, which was used extensively in World War I. 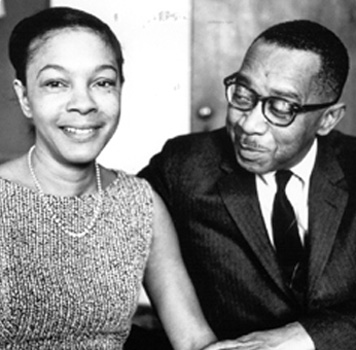 A husband-and-wife team of educational psychologists, Mamie Phipps Clark and Kenneth B. Clark studied the relationship between racial identity and self-esteem in black schoolchildren. Their research was conducted at the Northside Center for Child Development in Harlem, where they found that African American children as young as three were aware of their race and had a negative self image because of it. Most notably, the Clarks’ studies were used in the landmark Supreme Court case Brown v. Board of Education (1954). By using science to prove segregation’s negative impact on children, the Clarks played a major part in changing the United States educational system. 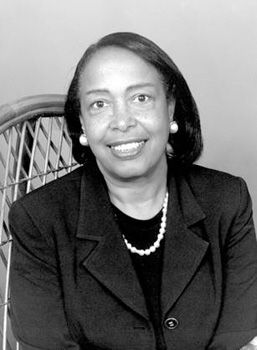 The development of a pioneering cataract treatment was but another in a protracted line of firsts for the ophthalmologist Patricia Bath. When she received her patent for the Laserphaco Probe in 1988, Harlem-raised Bath could already claim distinction as the first African American ophthalmology resident, the first African American female surgeon at the UCLA Medical Center, the first woman on staff at the Center’s eye clinic, and the founding president of the American Institute for the Prevention of Blindness. Bath’s instrument, devised after years of research in Germany, where laser treatments were more prevalent, was a minimally-invasive cataract-pulverizing device that supplanted a surgical treatment conventionally performed with a drill. The Laserphaco Probe yielded yet another distinction, as Bath became the first female African American physician to receive a patent. She would continue her success, receiving another patent in 2000 for a cataract treatment that employs ultrasound. 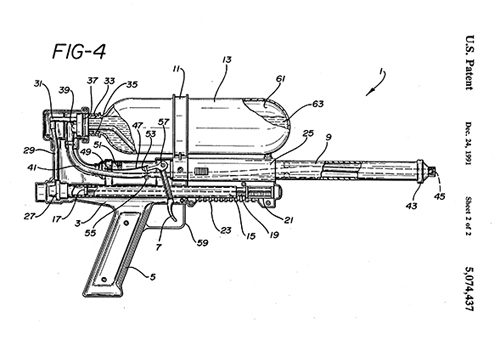 Like so many famous inventions, the Super Soaker™, one of the bestselling toys of all time, was discovered by accident. In 1982, NASA scientist Lonnie Johnson was experimenting at home for a Freon substitute, an environmentally-damaging CFC used as a conductor in heat pumps. While tinkering with compressed air, Johnson accidentally shot a spray of water across the room. The water had been propelled through a makeshift nozzle, and as a result was projected in a path much like water exiting a squirt gun, though much more forcefully. A full prototype, called the Power Drencher, was developed in 1989, and Johnson received a patent for the “Pinch Trigger Pump Water Gun” in 1991. That same year Johnson licensed the Power Drencher to toy manufacturer Larami, Corporation, who rebranded it Super Soaker™. It is reported that the Super Soaker™ has generated over $200 million dollars in sales since its introduction. 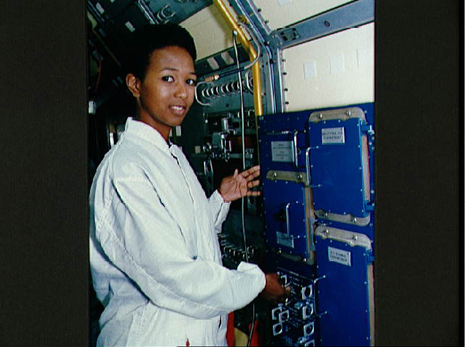 Aboard the space shuttle Endeavor on 12 Sept 1992, Dr. Mae Carol Jemison (above) became the first black woman to venture into space and the fifth African American to participate in a NASA space mission. The first, Dr. Guy Bluford, was part of the Challenger crew that launched on 30 Aug 1983. While many hope to become astronauts the number of people who are sent on missions into space is very limited. Of the approximately 225 astronauts who have participated in NASA since its formation in 1958, there have been fourteen African Americans astronauts. In addition to those trained for space missions, there have been many other African Americans who have added to the development of new technologies and innovative scientific methods for NASA.