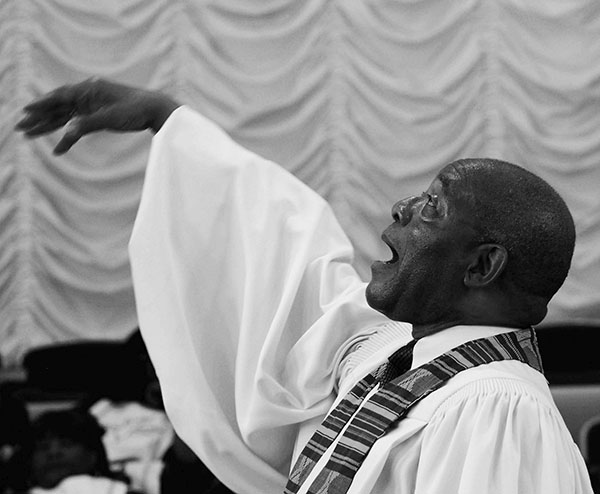 Third Baptist Church in San Francisco is pastored by the revered social activist and community leader, Rev. Dr. Amos Brown. A pillar of the African American community in San Francisco for 43 years, Rev. Brown, 78, a Morehouse College graduate, was among eight students in a social philosophy seminar co-taught by Martin Luther King, Jr. In 2015, Rev. Brown was quoted in a 2015 newspaper article about San Francisco’s black population dilemma: “We’ve had such a hemorrhaging of black folks,” Brown said. “The black churches are almost empty.” At a recent Sunday service at Third Baptist Church, only about 75 congregants attended service inside the cavernous 167-year-old sanctuary. 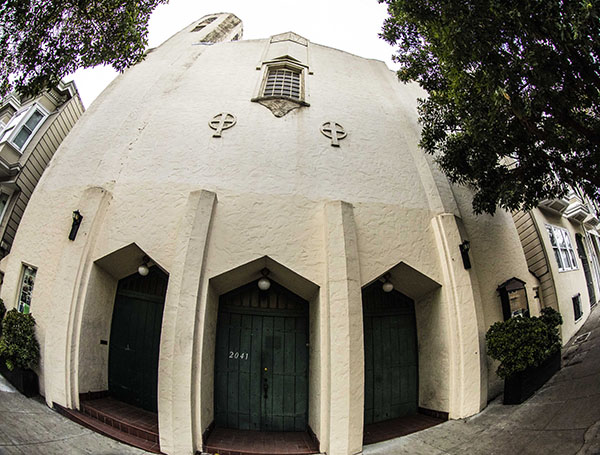 The Church for the Fellowship of All Peoples

The Church for the Fellowship of All Peoples, an interracial church co-founded in 1944 by celebrated theologian and religious leader Dr. Howard Thurman, still operates, though its membership is small. Dr. Thurman authored many books, including the classic theological treatise, “Jesus and the Disinherited”. Dr. Thurman died in 1981. 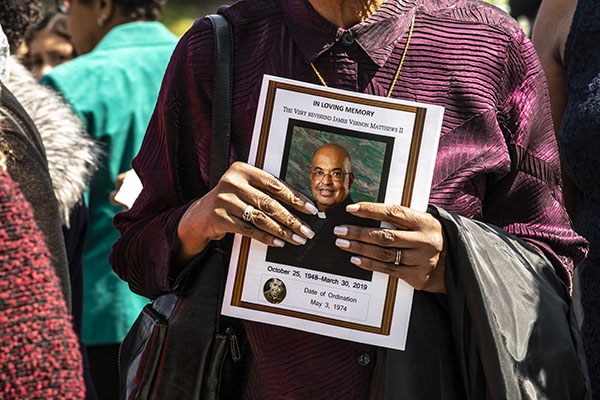 Fr. James Matthews was the definition of a compassionate neighborhood parish priest. In 1974, he was the first African American ordained priest in northern California. Fr. “Jay” was pastor of St. Benedict Catholic Church in East Oakland’s black community for 25 years before becoming the rector of The Cathedral of Light in downtown Oakland in 2015. Fr. Jay, 70, died suddenly of a heart attack at his residence in April 2019. The community church, established in 1930, still thrives though only about 3 percent of African Americans in the U.S. are Catholic. 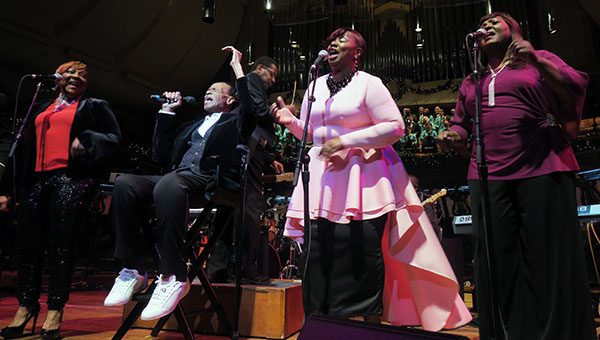 Bishop Walter Hawkins started Love Center Ministries (non-denominational) in Oakland in the 1972. A Grammy Award-winning Gospel composer and singer, Hawkins grew his congregation over the years. He performed at the White House in 2008. Walter died of pancreatic cancer in 2010. His brother, three-time Grammy winner Edwin, also an accomplished composer and gospel artist, was known for his 1969 gospel hit "Oh Happy Day." Here is a photo of Edwin performing “Oh Happy Day,” with three members of the Edwin Hawkins Singers at a holiday concert in San Francisco in December 2017. Edwin died of pancreatic cancer a month later. The Rev. Kenneth Smith is pastor. The Hawkins siblings still attend. 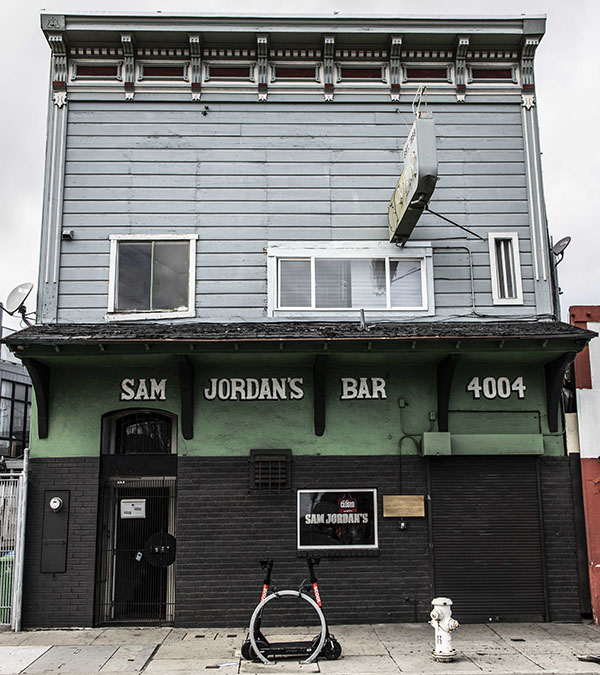 A fixture in the Bayview-Hunters Point neighborhood in San Francisco for 60 years, the family-owned Sam Jordan’s Bar and Grill closed in November 2019. Sam Jordan was a Navy veteran. 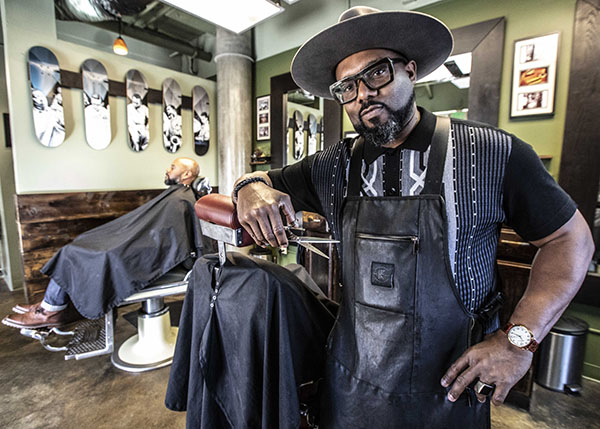 Charles Blades Barber Spa in Oakland seems to have a sustainable business formula. Blades has had his shop for twelve years. “My business is diverse. I cut all hair,” said Blades, 47. “It’s all about staying connected to diverse cultures and the community.” Barbershops are traditionally known as the Black Man's Country Club. Blades’ barber shop, located in the trendy, upscale Jack London Square section of Oakland, is outfitted with a mini-bar and cigars and regularly hosts live Jazz music and other cultural events. 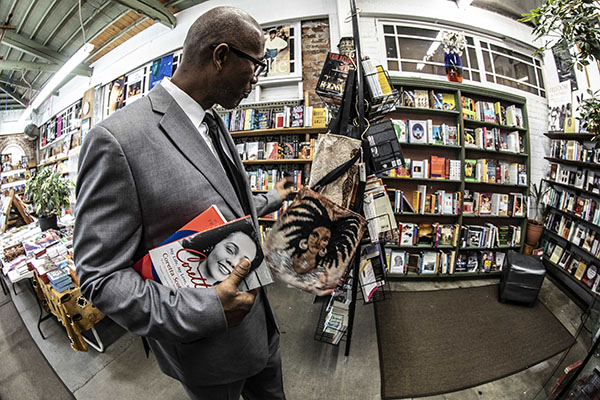 Marcus Book Store in Oakland, established in 1976, touts itself as the oldest Black-owned book store in the U.S. A companion Marcus Book Store that opened in 1981 in San Francisco’s Fillmore District closed in 2014. Named in honor of black nationalist Marcus Garvey, the original Marcus Books dates to 1960. Malcolm X frequented the shop, and visiting authors over the years included Maya Angelou, Amiri Baraka, Terry McMillan, Toni Morrison and Oprah Winfrey. In this photo, customer Jerome Bearden browses for holiday gifts. 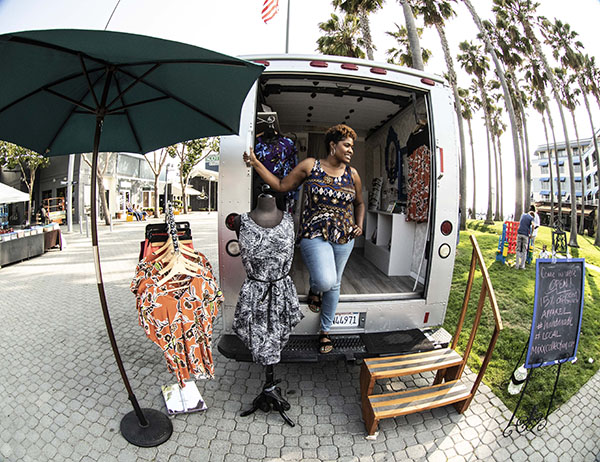 Tonya Montgomery, 37, is a clothes designer and owner of Mixx Collection in Oakland. She sells her apparel online and on weekends from her mobile truck. 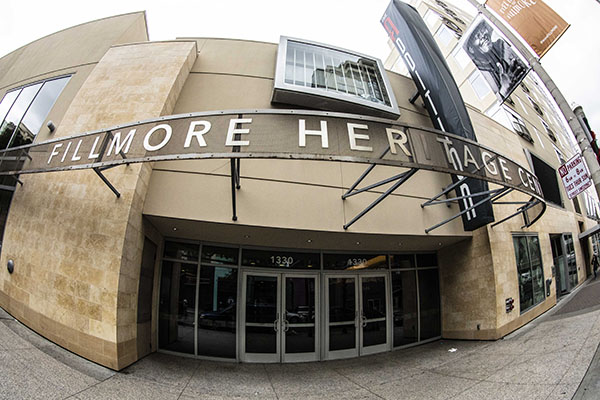 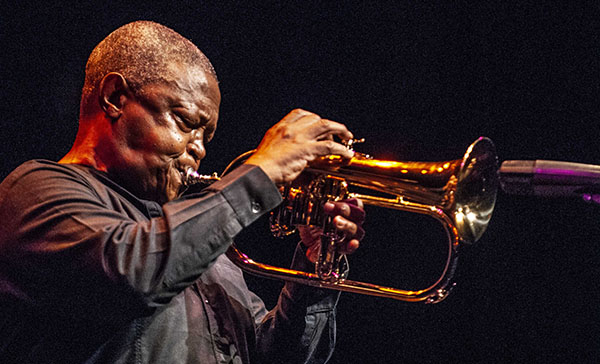 The Fillmore Heritage Center was built in 2007 to bring jazz and blues back to the Fillmore District, once the epicenter of black culture in the city, but where the African American population has been declining for decades thanks to forced removal in the 1960s and 70s and current gentrification. The properties once anchored this section of San Francisco called “The Harlem of the West.” The center, the adjoining art gallery and corner 1300 restaurant have all closed. South African jazz giant Hugh Masekela used to perform there.