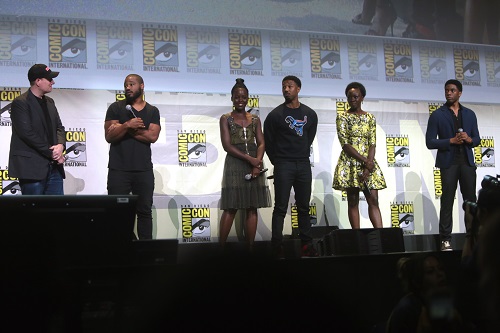 Introduced in Fantastic Four #52 (1966) by Jack Kirby and Stan Lee, Black Panther is the first black superhero to headline a comic book. Crucially though, hailing from the fictional African superpower Wakanda, and not the U.S., he was not the first African American superhero—that credit goes to Sam Wilson, also known as the Falcon. As Jonathan Gayles's documentary White Scripts and Black Supermen (2012) thoroughly outlines, Black Panther is one in a long line of early black superhero characters created by white authors who, well intentioned they may have been, limited the scope of these characters and sometimes included damaging stereotypes, especially in their representation of black masculinity and sexuality. In his early run, Black Panther was emptied of most of his political potential. Tasked to help "all mankind," he left Wakanda and, to avoid any affiliation with the Black Panther Party, briefly changed his named to "Black Leopard." Rebecca Wanzo attributes Don McGregor (1973‒1976) with beginning a long decolonization of the character, and Christopher Priest (1998‒2003) and Reginald Hudlin (2005‒2010) for accelerating it—particularly with their contributions of the all-female army, the Dora Milaje, and Black Panther's sister Shuri. Leading up to what would be one of the highest-grossing films of all-time, Marvel hired the renowned author and journalist Ta-Nahisi Coates to spearhead its concurrent comic series. Award-winning and esteemed authors Roxane Gay and Nnedi Okorafor in turn advanced the progressive vision of this world, including black queer representation in Wakanda. In addition to inspiring new fandoms, the film Black Panther (dir. Ryan Coogler) starring Chadwick Boseman, Lupita Nyong'o, and Michael B. Jordan (pictured above) generated significant and nuanced debate about black heroism, black liberation—including a large contingent of fans arguing that "Killmonger [the villain] was right"—and the integral if often erased role of black women in that project. Nominated for six awards at the 91st Academy Awards, including Best Picture, Coogler"s film adaptation won three: Best Original Music Score (Ludwig Göransson), Best Production Design (Hannah Beachler and Jay Hart), and Best Costume Design, for which Ruth E. Carter became the first African American to win the award. 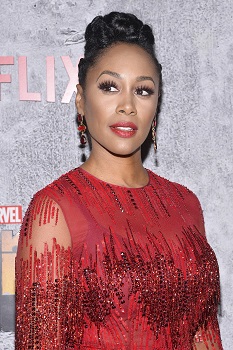 Black women have historically been objectified, sexualized, and relegated to sidekick roles in superhero comics. Evocative of the Blaxploitation films of the period, Misty Knight, created by Tony Isabella (who would later create Black Lightning) and Arvell Jones in 1975, is a police detective in the NYPD and, along with Storm and Vixen, one of the longest-running black female comic superheroes. After losing her arm in a bomb attack in the Marvel Universe, Tony Stark supplies her with a bionic arm and she opens a private investigation business. Part human and part machine, Knight, along with Black Panther, is one of the pivotal characters in the early history of Afrofuturism. As a black woman empowered by her disability, Knight is a significant representation in comics of what Kimberlé Williams Crenshaw calls "intersectionality." As Grace Gipson writes of Misty Knight, "Visualizing these identities also contributes to their normalization: it un-others them, respects their otherness, and potentially destigmatizes otherness." As a police officer, Knight is a crucial character in narratives about the tensions between being "black and blue," and the efforts and limitations of black police officers to "reform [the institution of policing] from within." This is central to her narrative arc in both Netflix's Luke Cage series, in which Knight is portrayed by Simone Missick (pictured above), and Ta-Nahesi Coates's Black Panther & The Crew, which directly references the Black Lives Matter movement. 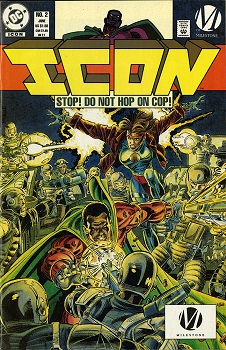 Dwayne McDuffie, Denys Cowan, Derek Dingle, and Michael Davis founded Milestone Media in 1993. Tired of the flat treatment of black characters and the limited opportunities for black writers and artists (see McDuffie's terrific satirical proposal to Marvel to write "Teenage Negro Ninja Thrashers"), they saw the need for editorial control and copyright ownership of their work. In exchange for publication and distribution, they granted DC a limited license of their characters—including the right to refuse to publish but not the right to change or alter any aspect of the comic—thereby becoming the largest and most successful black-owned comic company to date. Milestone went on to create a cast of characters rich not only in racial diversity, but also inclusive in gender and sexuality. Their most well-known and commercially successful characters were Static Shock, who headlined an animated series on The WB (2000‒2004), and Icon. In a short documentary about the company, McDuffie describes how Static Shock revealed the hypocrisy of the comic industry and its double standards on the topic of black sexuality. Critics Marc Singer and Sundiata Keita Cha-Jua credit Icon for its complex engagement with the history of black superheroes as well as the ideological diversity of the black community—Icon is depicted as a conservative Republican, but his views are constantly brought into tension by his sidekick Rocket. Representative of their bold engagement with social issues is the narrative arc andré m. carrington calls "Rocket's Decision," in which the fifteen-year-old Rocket considers having an abortion. Milestone is a crucial point in the transition from predominantly white writers and artists telling the stories of black superheroes like Black Panther, Falcon, and Black Lightning, to black artists and writers not only getting opportunities to shepherd and even "de-colonize" those characters, but to create and market new characters as well. 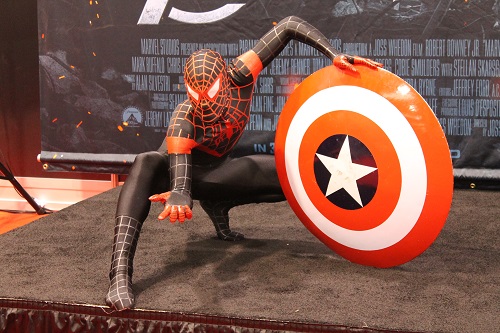 Miles Morales, an Afro-Latino teenager from Brooklyn and the latest "race-bending" iteration of Spider-Man, has been met with mixed reception. Photo by Pat Loika via Flickr.

In limited efforts to expand the diversity of their superhero rosters, Marvel and DC have introduced new iterations of pre-existing and usually commercially successful superheroes as African American; depending on the perspective of the commentator, this practice has come to be called either "race-bending" or even "blackwashing" characters and has had mixed results. In 1971‒1972, Neal Adams and Dennis O'Neil introduced audiences to Detroit native John Stewart as the "substitute" Green Lantern—a character who was ultimately featured in the animated series Justice League (2001‒2004), but was set aside for DC's widely panned major motion picture starring Ryan Reynolds as Hal Jordan. In 2003, Robert Morales and Kyle Baker provocatively introduced the character Isaiah Bradley, the actual first Captain America created from unethical experiments on African American soldiers evocative of the Tuskegee Experiments. These characters often face backlash from reactionary and even racist comic book fans, and for this reason are also easily scapegoated by comic book executives. In 2017 Marvel's VP of Sales David Gabriel made headlines for making the incomplete and inaccurate claim that "diversity" was to blame for their declining sales: "What we heard was that people didn't want any more diversity." As critics pointed out at the time, the diverse characters whose sales lagged usually featured predominantly (if not completely) white creative teams, whereas those characters developed by more diverse creative teams made up some of Marvel's most successful comics that year, including Ta-Nahesi Coates's Black Panther and G. Willow Wilson's Pakistani American Ms. Marvel. But, even proponents of diversity in comics offer critiques of this practice. Black Panther author Nnedi Okorafor argued on Twitter, "Ugh, can we JUST CREATE NEW CHARACTERS WHO ARE BLACK? Is it THAT HARD? Blackwashing only means the foundation will ALWAYS be white. It's NOT the answer. It's not even AN answer." A fascinating case study for the shortcomings and potentiality of this practice is Miles Morales, the "new" Spider-Man of mixed Afro-Latino heritage. Miles was introduced by Marvel in 2011 with some controversy. First written by a primarily white creative team led by Brian Michael Bendis, Miles was criticized for saying, "I don't want to be the Black Spider-man. I want to be Spider-man," which could be read as a conciliatory signal to white fans to feel comfortable with the character in spite of his race, rather than a character who was proud of or empowered by his race. More alarmingly, Miles's father is a police officer who shares a name with the President of the Confederate States: Jefferson Davis. However, after being shepherded by a more diverse series of writers, including novelist Jason Reynolds, director Peter Ramsey, and comic writer Saladin Ahmed, Miles Morales has been transformed into a hugely successful character—but more importantly, one that treats race with visual and narrative nuance. On the strength of these contributions, in 2017‒2018, Miles headlined not only his own popular comic series, but also a bestselling video game and the award-winning animated film Spider-Man: Into the Spiderverse (2018). 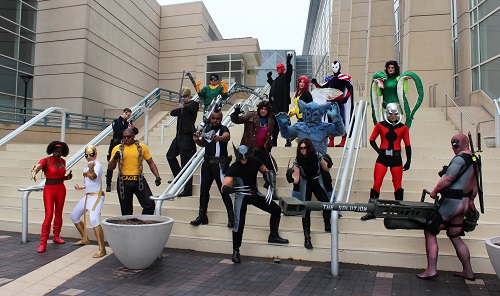 Cosplay of Marvel Comics characters at the 2013 Chicago Comic and Entertainment Expo. Photo by Pat Loika via Flickr.

Although cosplaying, or dressing in the costumes of beloved characters, often for a convention, can offer a fun if expensive experience of fan community-building, it also exposes the colorism, anti-blackness, and racism that African Americans face in comics and adjacent communities. The exposure and success of black superheroes, most notably from the Black Panther, A Wrinkle in Time, and Spider-Man: Into the Spiderverse films, has created much excitement, pride, and opportunity for fans whose identities were underrepresented on screen for decades. However, cosplay also allows for escapism and the exploration of otherness one would expect when dealing with mostly fantastical, sometimes cartoon and even alien species. Instances of harassment and racism most often arise when black cosplayers dress and perform as non-black characters, such as when cosplayer Krissy Victory was attacked for dressing as D.Va, a Korean character from the popular video game Overwatch. Black cosplayers have in turn united and shared their pictures using the hashtags #BlackCosplayerHere and #28DaysOfBlackCosplay during Black History Month, and also created events like "Blerdcon," a "black nerd" convention. 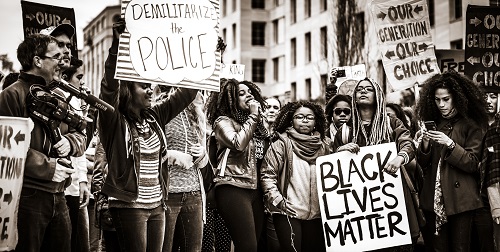 Following the murder of Trayvon Martin in 2012 and the mobilization of a movement after the murder of Michael Brown in 2014, Black Lives Matter and police brutality have become topical themes in a number of superhero and non-superhero comics, including most notably Ta-Nahesi Coates's Black Panther & the Crew (2017), Victor LaValle's Destroyer (2017), Kwanza Osajyefo's Black (2017), Marc Bernardin's Genius (2014), and Tony Medina's I Am Alfonso Jones (2018). While some comics, like I Am Alfonso Jones, bring a great deal of care, research, and fidelity to its engagement with the BLM movement, other instances are outright offensive. For example, S.H.I.E.L.D. #8: No Angel (2015) features a splash page of a deceased young African American teenager pictured with large angel wings in a morgue. In a foregrounded horizontal panel on the bottom of the page, his mother, crying, says the words, "He was no angel." This is a direct reference to a controversial New York Times feature from 24 August 2014 which emphasized Brown's exceedingly commonplace foibles—experimenting with marijuana and alcohol, rapping, and getting into "at least one scuffle"—and ultimately functioned to mobilize empathy away from Brown. On the whole, comics that reference or represent the movement have struggled with at least two contradictions between its themes and its form and genres. First, the emphasis of some on exceptional superheroes as individual leaders conflicts with what has been described as the "radical democracy" of the movement itself—built across a "collective of more than 50 organizations representing thousands of black people from across the country." This tension emerges in Ta-Nahesi Coates's Black Panther & the Crew (2017), where the all-black superhero team must physically beat up and discipline BLM protesters who are too easily manipulated by their emotions. Second, the trope of using of cartoon violence to propel action in comics can be problematic in many cases. A survey of these BLM-related comics reveals a much lower threshold in applying cartoon violence to black characters, whether as victims or even as villains, than to white characters. Moreover, images intended to be empowering, such as Luke Cage's evocative hoodie riddled with bullet holes, can actually diminish the suffering of real-life victims and confirm pre-existing racial biases—like those used by ex-police officer Darren Wilson to absolve his responsibility in shooting Brown—that African Americans are less susceptible to pain or are even superhuman.