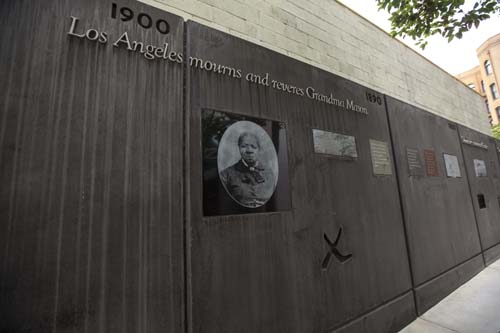 Biddy Mason Park commemorates one of Los Angeles' first black female philanthropist and property owners. Born into slavery in Georgia, Mason was brought to California, a free state, in 1851 by her owner Robert Smith. In 1856, Mason won her freedom, along with her children, when the local sheriff learned Smith was planning to take her and other slaves to Texas, a slave state. In the resulting trial, the judge ruled that under California law they were "entitled to their freedom and are free forever." Mason found work in Los Angeles as a midwife and nurse, eventually saving enough money to buy property. She built her wealth renting homes and eventually selling off bits of her land as Los Angeles expanded. In 1872 she helped found the Los Angeles branch of the First African Methodist Episcopal Church and later started a daycare and school for children on her land at Third and Spring streets where the park now sits. By the time of her death in 1891 she was known for her philanthropy and had a net worth of $300,000. The memorial park was built in 1991.

The First AME church of Los Angeles was founded in 1872 by Biddy Mason and Charles Owens and is the oldest African American church in Los Angeles. Throughout its history the church has had a strong charitable and political presence. Some modern programs include a free legal clinic for low-income residents and a low-cost counseling center. 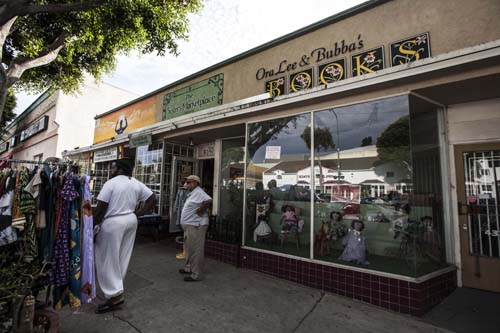 Residents in Leimert Park African Village outside Ora Lee and Bubba's Books on Degnan Blvd. Leimert Park Village is a center for African American arts and culture in Los Angeles. The area features many small, locally owned businesses, such as art shops and cafes, and is home to a flourishing music scene. A fixture of the music culture is the World Stage which was set up by drummer Billy Higgins and poet/activist Kamau Daáood as an education and performance venue. It holds public workshops, concerts, jam sessions, and other programs. 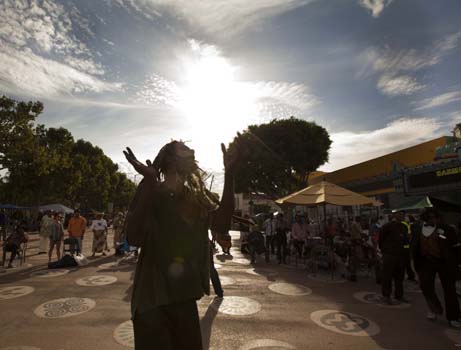 A man dances at a Leimert Plaza Park festival. The Leimert Park neighborhood, located in South Los Angeles, is known for its vibrant arts scene, and the park itself is host to events ranging from the annual Kwanzaa festival to a weekly drum circle. The park has also long been a gathering place for community activism, from demonstrations against South African apartheid in the 1980s to recent protests against police brutality in cases such as Michael Brown, Freddie Gray, and Eric Garner. 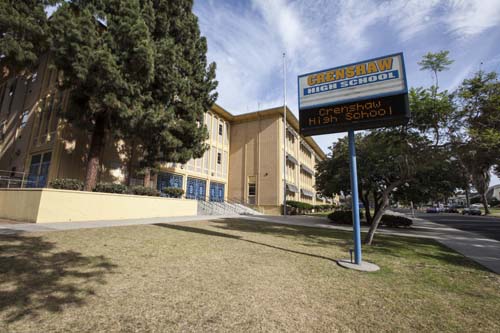 Located in South Los Angeles, Crenshaw High School is known for some of its more famous African American alumni. In particular, the school's strong boys' basketball program has produced several NBA players, including Darwin Cook, Kevin Ollie, John Williams, and Marques and Kris Johnson. Also among its other well-known graduates are Kabeer Gbaja-Biamila of the Green Bay Packers, Olympian Johnny Gray, and rapper/actor Ice-T. In addition, the school was featured in films such as Love & Basketball and Akeelah and the Bee. 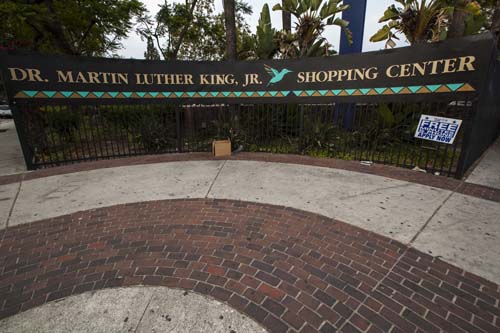 The Dr. Martin Luther King Jr. Shopping Center in Compton was built in 1984 as part of the re-development of the commercial area destroyed by the Watts Riots in 1965, and is one of the many area locations named for the civil rights leader, who visited the neighborhood on 17 August 1965 after the riots. Located outside the shopping center is Los Angeles' first memorial to Dr. King; a large pulpit which includes the full text of the "I Have a Dream" speech. In order to read the speech the viewer stands in an impression of footprints the size of Dr. King's. Though the shopping center was in the news during the 1992 riots, it suffered only minimal damage and was reopened within a month. 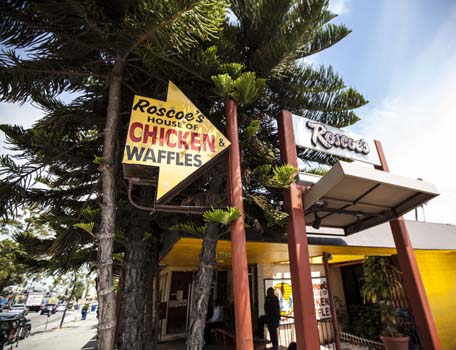 Roscoe's House of Chicken'n Waffles was founded in 1975 by Herb Hudson, a native of Harlem, and has become a Los Angeles institution. Some notable pop culture references to Roscoe's include mentions in songs by Ludacris, The Notorious B.I.G., and Childish Gambino (Donald Glover), as well as references in The Fresh Prince of Bel-Air, novels, and more. 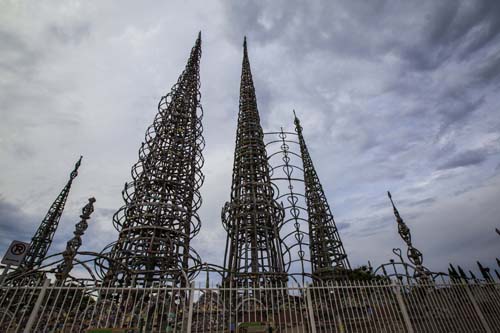 The Watts Towers, an art installation consisting of 17 sculptures, were designed and constructed by Simon Rodia, an Italian immigrant. The project took 33 years, from 1921 to 1954, and the site is now a state park. The adjacent Watts Towers Arts Center was formed in 1965 and provides the community with free art and music classes, workshops, and festivals. The Center's exhibition space includes permanent collections as well as rotating exhibits, featuring from to February 22, 2015 to February 28, 2016 an exhibition on the 50th anniversary of the Watts Riots. 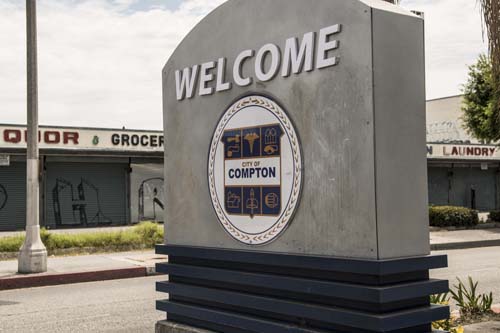 Made famous in the late 1980s by N.W.A's Straight Outta Compton, Compton developed a reputation for gang violence and is known as the birthplace of gangsta rap. Though still higher than national averages, Compton's crime rates have dropped drastically since the 80s, thanks in part to initiatives such as Compton Empowered, which have helped reduce gang violence with an emphasis on mediation, leadership training, and employment training. Moreover, Compton is one of several areas in South Los Angeles experiencing a radical demographic change, from a rising Latino population, an influx of immigrants, and an accelerated process of gentrification.