A 2009 ALA/RUSA Outstanding Reference Source
A 2008 Booklist Editors' Choice/Top of the List, Reference

"A powerful testament to our intelligence, integrity and commitment to excellence, traits often ignored by mainstream historians....This reference collection is a must-have for your library."—Essence

"This set, a monumental creation, is now the definitive black biographical database....Either the print or the online version should be a crucial purchase....Highly recommended. All levels."—CHOICE 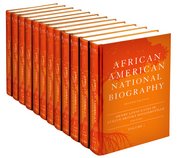 In the summer of 2002, the W. E. B. Du Bois Institute for African and African American Research and Oxford University Press began work on the African American National Biography project. In the spring of 2004, the one-volume African American Lives was the first publication to come out of this project and offers up-to-date, authoritative biographies of some 600 noteworthy African Americans.

Published in February 2008, the African American National Biography has expanded this landmark scholarship. An eight-volume set containing over 4,000 entries written and signed by distinguished scholars under the direction of Editors in Chief Henry Louis Gates, Jr., and Evelyn Brooks Higginbotham, the African American National Biography is the most significant and expansive collection of black lives in print today. This essential scholarly reference work presents history through the lives of its people, profiling the famous, infamous, and little-known figures in African American history.

Covering African American life for almost five centuries, from the arrival of Esteban in Spanish Florida in 1528 to notable black citizens of the present day, this major reference project collects and resurrects the lives of thousands of African Americans, revealing and intimate and textures history. The individuals in these biographical entries are slaves and abolitionists; writers; politicians and business people; musicians and dancers' artists and athletes' victims of injustice and the lawyers, journalists, and civil rights leaders who gave them a voice. Their experiences and accomplishments each provided a piece of the collective biographical history of African Americans in America, finally, through the AANB, these important lives and contributions have been restored, recorded and made accessible to all students, teachers, scholars, and anyone interested in our nation's history.

Completed articles are being regularly added to the Oxford African American Studies Center; biographies already online include Hank Aaron, James Baldwin, Rosa Parks, and over 6,000 others.

Henry Louis Gates, Jr., is W. E. B. Du Bois Professor of Humanities, Chair of Afro-American Studies, and Director of the W. E. B. Du Bois Institute for African and African American Research, Harvard University. Evelyn Brooks Higginbotham is Professor of History and Afro-American Studies at Harvard University and also editor of the Harvard Guide to African American History.